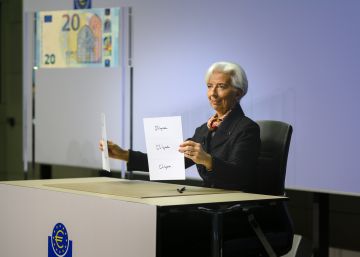 A total of 100 academics and 60 European associations committed to a financial system that serves society, including Asufin, have sent a letter to Christine Lagarde, ECB president, to "act immediately" in the fight against climate change. These experts claim that the ECB "does not buy massive assets from companies involved in carbon-intensive industries and related to fossil fuels." They ask him that "under his leadership, the ECB supports expansion and refinancing operations in green investments."

A large group of experts and activists from the European economic world, most of them grouped into Finance Watch, association dedicated to making finances serve society, demands Lagarde to take a step forward against climate change.

In the letter, which will be published today in the main newspapers throughout Europe, he reminds him that during his speech before the European Parliament, “he rightly promised that the ECB should place environmental protection at the center of the tasks that concern it "

They point out that the estimates they handle indicate that "if there are no forceful mitigation measures, the physical risks related to climate change could cause losses of up to 24 billion dollars in global financial assets."

That is why they are asking for "a radical change in financial flows towards a low-carbon and socially just energy transition, and this is hardly possible without central banks actively redirecting the financial system in the right direction." The result, these experts say, will make the economy more sustainable and create employment in less carbon-intensive sectors.

They say that the ECB, "in the name of market neutrality, continues to buy assets in bulk from companies involved in carbon-intensive and fossil fuel-related industries." And remember that the ECB has been very resourceful in the past crisis to defend the euro for what they demand this intelligence to “redesign the operations of quantitative expansion for a green transition.

Just yesterday, Lagarde said in the European Parliament that his review of the ECB's strategy “It will be an opportunity to reflect on how to address sustainability in monetary policy. ”

Full text of the letter:

"The ECB has to act immediately to curb climate change"

As the new President of the European Central Bank, you face many challenges in the coming years, but the most crucial of all is to determine how the ECB will act to fight climate change and accelerate the transition to a carbon-free economy. During your intervention before the European Parliament, you rightly committed to the ECB placing environmental protection at the center of the tasks that concern you. ” As academics, civil society leaders and citizens deeply concerned about climate change, we are convinced that the most powerful financial institution in Europe cannot remain passive while witnessing a growing environmental crisis.

Climate change not only endangers vital processes, it also threatens stability, the economy and employment. It has been estimated that if blunt mitigation measures are not applied, physical risks related to climate change could cause losses of up to $ 24 trillion of the value of global financial assets. For all these reasons, we need a radical change in financial flows towards a low-carbon and socially just energy transition, and this is hardly possible without central banks actively redirecting the financial system in the right direction. Not only will this make our economy more sustainable, but it will facilitate job creation in less carbon-intensive sectors.

We know that this issue is being discussed in many of the central banks that are members of the "Network for the greening of the financial system", including the ECB. But the process is being very slow and we are wasting time. We cannot wait years to study the financial risks involved in the long term; Central banks must use all the tools at their disposal to proactively prevent these risks. In that sense, it is particularly striking

that the ECB, in the name of market neutrality, continues to buy assets massively from companies involved in carbon-intensive and fossil fuel-related industries. If the ECB is really concerned about climate-related risks, it must recognize that its current monetary policy is part of the problem and is reinforcing a status quo dangerous.

Without further delay, the ECB should commit to phasing out carbon-intensive assets from its portfolios, beginning with the immediate divestment of coal-related assets. Without waiting for the development of the "green taxonomy" by the European Commission, the climate impact criteria should be used to evaluate all assets currently available for monetary operations.

As the emergency response to the latest financial crisis has shown, central banks do not lack imagination when the situation demands it. Under his leadership, the ECB could deploy a similar ingenuity to address the threats posed by climate change; for redesigning "quantitative expansion" operations or refinancing operations that ensure an investment in the contribution to the green transition.

Inevitably, we will have to face the ideological resistance of those who think that central banks should leave climate policies to others and remain in the market in a "neutral" way. But it is time to review this principle. If one agrees with Nicholas Stern that "climate change is the result of the biggest market failure the world has seen," then the idea that monetary policy should simply reflect the market is equivalent to adding a more regulatory failure. from the market itself.

On the other hand, you will also find strong political support in the face of determined action. The fight against climate change is an important political objective of the EU and, as such, fits its mandate as defined in Article 127 of the Foundational Treaty of the European Union. This has been confirmed several times by the European Parliament. In addition, the ECB as an EU institution is legally concerned by the Paris Climate Agreement. And if you have any doubts about this point in the future, you can trust that the European Parliament – to which the ECB is accountable – will provide more clarity and guidance on the role that the ECB should play in the overall EU climate strategy. .

If you keep your promise to put the ECB at the forefront of the fight against climate change, you can count on our support to contribute to the debate in a constructive and democratic way. We wish you good luck and success.