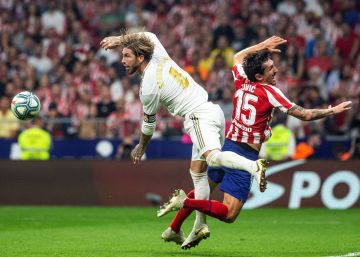 As usual in each game, also when it rains, Zinedine Zidane observed the derby one step ahead of the line that delimits the technical zone, that strip of grace that almost all the fourth referees grant to the coaches. From that upright rictus, the Madrid coach watched the duel with the same tension as its players, wrinkling the suit with gestures, and ups and downs of waist. "Defensively we were fine, we have lacked something offensively but we are in it," said the Frenchman.

“This point knows us little, the goal was to add all three. The team has kept the goal to zero, they close the lines a lot, and it costs to generate spaces. We had one from Karim with a great Oblak stop. But we remain undefeated and to continue, ”Sergio Ramos said, on Simeone's target for an alleged lack of respect for the line judge in the first half. "The team has a very good state of mind," said the Madrid captain, who complained about the distribution of reprimands by the referee (Nacho and Varane for whites, only Thomas in the rojiblancos): "The judges have to decide. In the end we took the cards when they made more fouls. It is a secondary issue and should not be given more importance than it has, "he concluded. With the tie yesterday, Madrid remains undefeated in the three visits he has made so far to the Wanda Metropolitano (two draws and one victory, last season by 1-3).

"When you are zero to zero, with the players we have we can risk more, we are at it," Zizou added. “We want to do more and we will do it, although in front there is also a rival, a team that tries to counter you with their offensive things. You have to think about the next game. Before Atlético there was room to make more points, ”said the Frenchman, who wanted to throw a cape at Hazard, again insipid in attack. “It doesn't lack much, it's just a small thing. He has done a good job and we have not had many occasions, we must continue, and I want to highlight everyone's work, ”said the white coach. On Valverde, his bet in the midfield with Kroos and Casemiro, the coach also stopped. "He has played a good game, I have taken him because his twin was hurting," Zidane conceded.

“Nobody is satisfied with a zero draw, but in the end no one throws himself in to score the goal to get caught in a counter. We didn't want to go crazy to get killed against you, ”said Courtois, the Madrid player whistled by the Wanda Metropolitano audience with Ramos. “I try to see the matches as they come. People and the press kill people very fast. I only keep the criticism of the football people, which is what they know what this is about, ”said the Belgian, who only had to complete a stop throughout the match. That shot he received from Diego Costa is the only one that has addressed the white goal in the last three games. “In some games we lacked that union. Now we make good pressure after losing the ball. We did well against Sevilla, Osasuna and today against Atlético. Today we play against a very strong team defensively. We played a good role and we must continue along this line, ”he expanded the goal, before leaving a new message. "We are with the master at 200%," he added, annoyed by the criticisms that have accompanied the French coach during the start of the season.