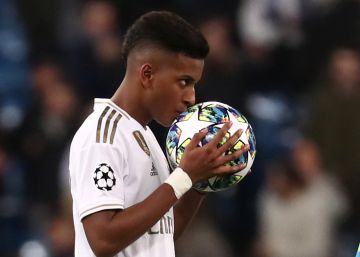 Ovationed while heading up the tunnel of changing rooms of a Bernabéu that contemplated a boy with a ball under his armRodrygo grabbed not only attention while that sphere that was now hers rolled through the grass, but also in the press rooms and in the halls of a building surrendered at his feet. "His game is joy," said a Zidane delivered. “Nothing surprises me about him. He is a quality player, who has come here to do what he is doing. This is just the beginning and hopefully it can continue like this, anyway, you have to be calm with him, ”said the Frenchman, before highlighting a very specific and very unusual aspect for an 18 year old player. “To highlight something I would say that your intelligence is ready. Learn very fast, want to improve. Technically it is very good, you just have to improve the physical, ”added the Madrid coach.

The protagonist of such praise showed that this calm against the goal is also in front of the microphones. "Things are going very fast," Rodrygo said. "My life is going very fast in Real Madrid," he added later, before, just like when he throws a cut, stop suddenly. “I am very calm, very calm. I think that's why things are going well, ”said the player, the youngest to achieve a perfect hat-trick (after marking head, with the right leg and with the left) in Europe at 18 years and 301 days, surpassing the record of Mbappé (20 years and 306 days). "I have fulfilled a dream by listening to the Bernabéu chanting my name," he confessed.

"We are not surprised what he does," added Carvajal, who in the second goal of Benzema signed his fifth assist of the season. “Training is very good, and today (yesterday) has scored three goals and has given one assist. Little better can be done, ”said the side. “I see him with a very clear mind to be 18 years old. Not only of character, but for how he plays. Hopefully it goes on like this, ”Kroos discovered. "He is 18 years old and not afraid," Benzema rounded. "Play the ball and I love it when I see a young man who plays like this," said the Frenchman, who with his double reached 50 goals and surpassed Di Stéfano's mark in Europe, although he didn't want to compare himself with the Argentine myth. "I don't consider myself a legend. When I signed for this club it was a dream and now I feel very good as I am. If I can help my team reach the highest level, I will continue like this, ”said the Frenchman.

The CSD develops a protocol for the media – La Provincia

La Liga Santander: In case of serious injury, can clubs sign players from leagues already finished? With which players could they be reinforced?