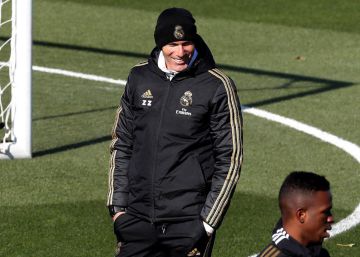 With the recent win against Galatasaray in the rear-view mirror, but with Eibar on the front window, the press conference of Zinedine Zidane this Friday in Valdebebas, prior to the visit of his team on Saturday to Ipurua (18:30, Movistar LaLiga ), turned once more around several of its players. Although not all of those news They reflect the same panorama. While Rodrygo, wheat-winger against the Turks in the Champions League, and Fede Valverde starred in the friendliest issues for being two of the players in the form of the squad ("I'm not surprised at their performance, when they play play they show their quality"), the repeated absences of Bale and James, who do not they will be before Eibar but they will travel with the selections of Wales and Colombia, they took Zidane to a stage where he did not find a possible dribble to save the situation.

"Bale and James are not available," he said bluntly. But aren't they because they are injured? He was immediately questioned. "Not injured, they are not available to play, okay?", The Frenchman stirred. "They have done things on the field but have not trained with the team," ZZ said. So they aren't injured? They asked him. "A player who does not train with the team is not available," the coach tried to justify himself with the same little success. So you are the one who decides not to train with the team and therefore it is a technical decision ?, continued the conversation. "I do not decide on that. It is they who decide if they can train with the team. They will go with the team, and they will have a few days to see if they can play or not," he added. At the moment, Real Madrid has not published any medical part about the physical situation of both players. In the case of Bale because the player does not give his consent to do so (drag some discomfort from an edema in the soleus of his left leg), while the Colombian has no recorded injury, since his last absence took place by the Birth of his second son.

"I don't have anyone's permission to say what Marcelo has, but it's a small thing and we're a little bit calmer," Zidane said in reference to the Brazilian side, who had to retire due to muscle discomfort during the game against Galatasaray, and that this morning he didn't train, like Bale and James, with the rest of his teammates.

The conflict regarding the health status of these three players was not the only mess Zidane had to face in a press conference that at times proved unnecessarily tense. His statements a few days ago about Mbappé and the player's dream "to someday wear the white shirt" were replicated on Wednesday by Leonardo, PSG sports director, who charged against the Madrid coach for referring to his player. "They annoy those words. Stop it, it is not time to destabilize it," said the Brazilian. "I only said what he said one day, that his dream would be to put on the Madrid shirt. I will say it again today and I would say it again. Leonardo can say what he wants, and I can also say what he wants," he limited himself. to answer ZZ.

In reference to the match against Eibar, the Madrid coach highlighted the complexity of the confrontation, not only for the opponent, but for the particularity of his stadium. "It is a very different field from the others, a little smaller, and we know the difficulty it has. Although we have had few days to prepare the game, we know that it is a different field and that in it they play in a different way from how they do it outside. But we are prepared, "argued the Frenchman, who was very satisfied with the sequence of four consecutive games without conceding goals added by the team. "It's something that I value a lot, and every time I talk after a game I mean that. It's a fact that means that the whole team works, but every game is a world and we have to repeat it," Zidane said.

Campus with gels and masks