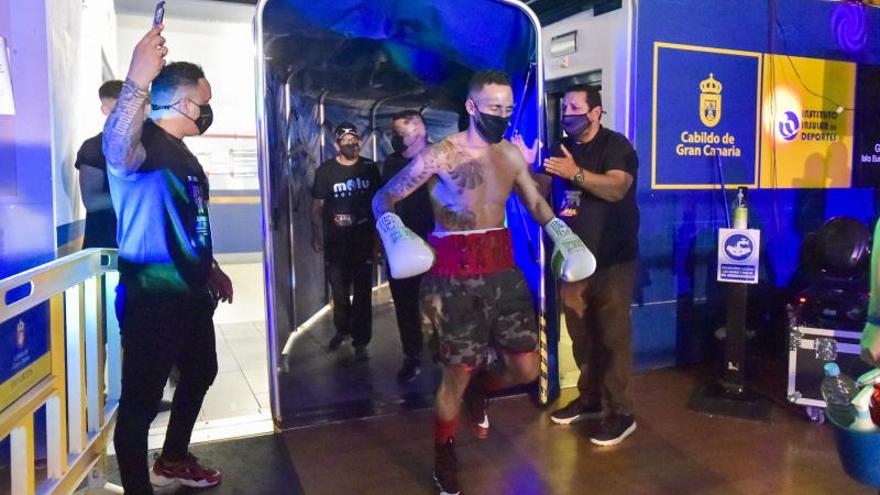 At the conclusion of the fight, after two of the three judges calculated a tie at 93 points, Mouse's finger in the air showing his indignation went for a walk. The current defender of the national title was not satisfied with the null and with everyone with whom he spoke, except for Zeus, he made it clear that he felt victorious after he even managed to send the Teldense fighter to the canvas in the fourth round .

We will therefore have to wait now for a new evening to be designated so that the Spanish champion belt will once again have a valid holder in a period not exceeding 60 days. A limbo that caused the anger of Pérez's coaching staff, who even kicked the fences of the boxing enclosure and one of the coaches challenged a fight with several present at the CID. There, Mouse, he threw sportsmanship and calmed his coach. Plated for him.

A final jarring situation at the beginning of the evening, which began with the cheers of the nearly 300 attendees at La Roca to enjoy a night of boxing. Hook to the virus from the faithful of the ring.

From the first beatings, Zeus measured the Sevillian's back. The kidneys of both fighters were wearing out with each hold. The combat was going to pass the path of the body and the flying fists in search of subtracting oxygen from each combatant.

Although Pérez, was pulling the mouse shop, to complain that the local was beating his gloves with the back of his skull.

The referee did not want foul play and was limited to warning the two boxers that he wanted clean fists and less hugs.

The complaints from the Spaniard continued in the second round, when he reproached De Armas for having made an ugly gesture to his eye, thus asking the referee to give him space to recover. While Zeus, to his corner to receive the orders of his team.

The stands trusted their fighter at every ring. Mouse looked more exhausted than the Insular in the first two rounds. His coach, a Japanese ribbon tied around his temple, instructed him in the senshei philosophy.

The sweat broke on his torsos so that each aesthetic movement of his crochet shines brighter. With each sigh in the air with the series of punches that flew in the CID, the fans were coming up.

Greater effervescence was received by the shouts of the public when in the third round Pérez took advantage of a mistake by De Armas by lowering his guard and with which his rival made him taste the taste of his green and white gloves on his chin. Straight to the face and visit Zeus' canvas amidst the bewilderment of those present to see if he would be able to continue in the fight.

The Gran Canaria endured like a wild boar until the bell rang again. Agüita on the neck and indications of its corner to withstand the Sevillian avalanche.

The family of the Sevillian fighter moved nervously on the parquet of the Insular Center, they wanted their titan to keep the Spanish champion belt for another year. But the spirits of those present, kept Zeus standing, who left that bewilderment behind after going to the canvas.

After the halfway point of the combat, De Armas employed a more savage strategy. He knew he had to do the rest if he wanted to match the advantage his opponent had gained in the early stages of the fight.

Amid so much ambition, the Andalusian, despite starting with an advantage, gave Zeus two low blows in the seventh round that made the Gran Canaria corner twitch, when he saw his warrior limp due to the recklessness of his rival.

Pain is optional. Honor is forever. Zeus paid attention to his motto, the one that dominated the north tier of the CID. From the eighth round the Teldense came up and after connecting a series of jabs he felt that he was cutting points.

The temperature rose when Telde's man chained several blows on Pérez's body and in which some crochet was about to hit the Andalusian jaw again. The boxing guild saw how the comeback could be closer.

In this way, the tenth and final round was reached, in which the judges, after evaluating the entire fight, did not see a clear winner and will have to fight again in less than two months.