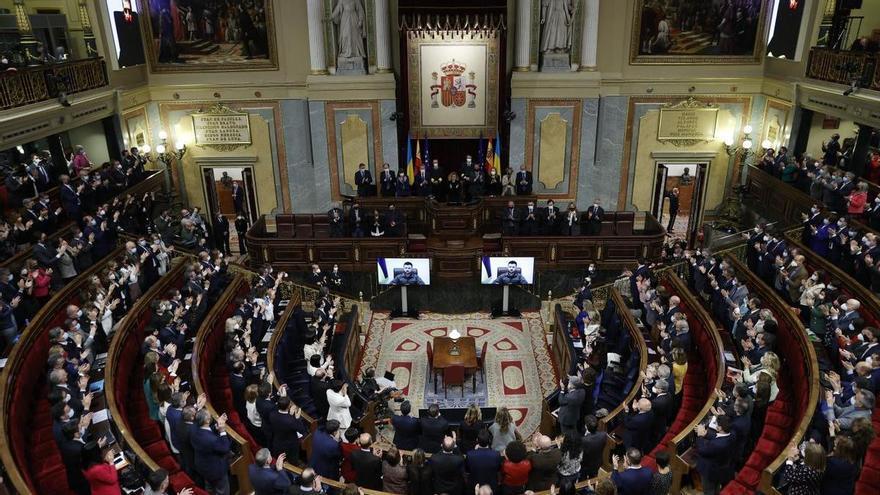 The Congress has received Volodímir Zelenski with applause and with parliamentarians and members of the Government standing. Just as they fired him after his speech in which he thanked the support that Ukraine is receiving from Spain, among which he has cited weapons, the shipment of which opened a gap within the coalition. As he does in his interventions before international parliaments, the Ukrainian president has made a simile of the war declared by Vladimir Putin when referring to the bombing of Gernika in 1937, who has recalled that it was when "the whole world" found out about the Spanish civil war .

Zelensky has transferred the horror of the war to the hemicycle by referring to mothers who write the names and contacts of some close people on the backs of their children in case they are assassinated. "Imagine that in normal cities, where more than 100,000 people live without water, without food, or medicine," Zelensky said about the terrible situation that some places in Ukraine have been going through since February 24, when the Russian invasion began. "The dead people are being buried in the courtyards where they lived, the children are hiding," said the Ukrainian president, for whom the worst thing is not knowing "how long the war can last." That is why he has asked that “the world do everything for peace”. "They are war crimes," he has said about massacres like Bucha's.

"Russia does not seek peace," said Zelensky, who recalled that Ukraine's defense of the Russian attack dates back to 2014 with the occupation of Crimea and after Donbas until the "large-scale attack" that has lasted 41 days. What Putin is looking for, in his opinion, is that there be no democracy in Ukraine. "What is normal for us, what Russia wants is for it to be dominated by a regime," he warned: "It wants to do it throughout the region, throughout Europe."

The challenge facing Putin, the Ukrainian president has pointed out, is the maintenance of peace on the continent and for this he has asked that the sanctions against Russia be "more forceful". “How can we allow the banks to make profits while they are torturing civilians? How can European companies have trade with the country that is destroying ours?”, he has asked. The Ukrainian president has called for more courage from the European Union and for him not to be afraid of Russia.

In the case of Spain, he thanked society for its support and directly addressed some Spanish companies, such as Porcelanosa or Maxam, to stop doing business with Russia. He has also referred to the purchase of Russian oil. In the EU there is a debate about it. The Spanish Government is in favor of cutting income to Russia as much as possiblebut wants the measure to be unitary and recognizes that other countries, such as Germany, have a greater dependency that complicates the rupture.

It has been one of those great occasions in Congress in which access to journalists is limited and velvet chairs reserved for special moments are placed, and also so that all parliamentarians can fit, both deputies and senators. The stands were also this time full of journalists and guests to listen to the Ukrainian president in the context of the videoconferences he holds with international parliaments to demand support against Vladimir Putin's aggression. The appointment with the Congress of Deputies had, in fact, to be delayed an hour because the UN Security Council summoned him urgently on the occasion of the Bucha massacre.