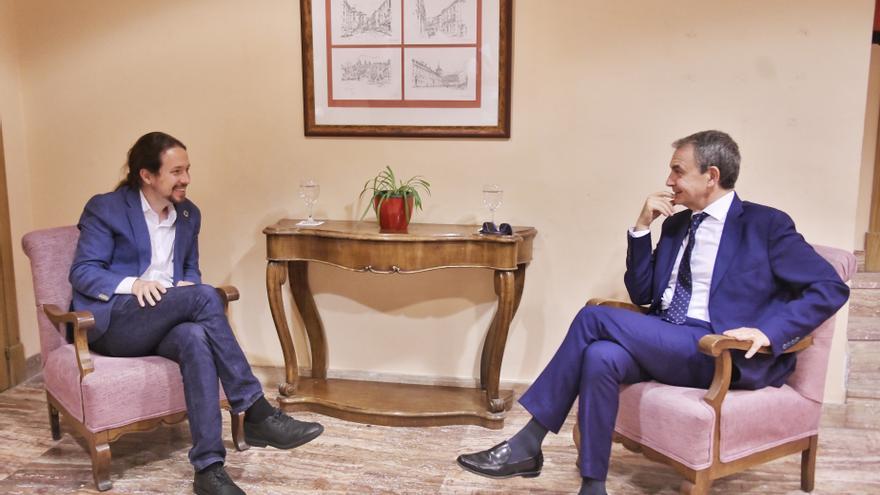 Between intervention and intervention, “canutazo”. Former President José Luis Zapatero was always a declarative politician. Much. When he was active and now, already removed from the front line. Today was not an exception. He arrived at the Complutense University as a guest of Unidas Podemos to close his summer course and has not avoided current affairs. He spoke of the King Emeritus and his problems with Justice, of the historic EU agreement for economic reconstruction after COVID-19, of the Government, of peace in the world, of the objectives of sustainable development, of United Podemos and even of Felipe González and his criticisms of the Executive. Not a single issue was left in the pipeline.

On Europe, he said that after the agreement this week in Brussels, there will be a before and after in the history of the EU and that he feels a great tranquility for the future of young people and pensioners after the member states have been able to agree to advance in a “welfare society built with the effort of all Europeans”. Europe, in her opinion, was risking “to be or not to be” in the context of this crisis and if it had failed, the union “would have languished” forever. “Europe resurfaces strongly. And whenever that happens, Spain and the international community are accompanied by a better destiny,” he said before giving a conference under the title “Peace and Prosperity” in the framework of the Complutense University summer courses. organized by Unidas Podemos.

Zapatero, who was personally invited by Pablo Iglesias to close the days of his party, defended that when societies are able to share the debt, “they share a common project and share the future.” He recalled that since the financial crisis of 2008, there were doubts about Europe and its capacity for common understanding and that, now, with COVID.19, the uncertainty has been “favorably” cleared.

The former president brought his differences with Felipe González – well known to all – to the framework of his visit to the Complutense and took advantage of a question from the press about the criticism of the formerly also head of the socialist government to declare his “closed support” for the government: “First, out of conviction. Then, because it has been an expression of the ballot box. And lastly, because it has a progressive and social program with which I feel fully identified.” Thus, he asked all leaders or former progressive leaders for “closed support for a government which, incidentally, is being supported by people not very close to the PSOE”

“There is a coalition that is working with what is shown that the dialogue between the left can do everything. We must all be patient,” he insisted before he remembered that it is a tradition in life “not to recognize things to others , although this makes us great as a country. ” And if it is one, he affirmed in a veiled allusion to Felipe González, who has previously exercised institutional responsibility, “because it is even more difficult to admit the successes” of those who come behind. Contrary to the dynamic attributed to the former Prime Minister, he did explicitly want to highlight Pedro Sánchez’s management at the European summit, which he described as “excellent” while encouraging the level of measurement and assessment in “its just terms”.

By itself it would not have marked enough distances with the first president of the socialist government of democracy, he still underlined that “fatuous criticism breaks him down while he stimulates and motivates the constructive attitude” and that a country that believes in progress, “must believe also that those who will come after us will do better because that means that we did it well and that we paved the way for better rulers. ”

Then, he spoke of historical moments and political leaders to deny the ability of some to see the circumstances and the scale of time and stop at a PP that, in his opinion, “has not heard anything” and that “will regret not having leaned in “or been up to the level the country deserved in the face of the pandemic. This, after giving for “the Legislature on track”, after the European agreement this week and, despite the attitude of those of Pablo Casado, who “have tried to make it not last long” with a strategy that he branded as “clumsy”: “Nothing unites more than adversity and exaggerated criticism. And since they exaggerately criticize Podemos and Pablo Iglesias, it will not work. The not very brilliant strategies are easily discovered.”

The easy thing in politics, according to the “Zapatero doctrine”, is to criticize and disqualify, while the complicated thing “is to take over the country, build, put a shoulder to rest and let people see that you want things to go well for Spain so that you can do well later. ”

He also did not avoid the scandals of the King Emeritus and the investigation into the alleged collection of illegal commissions, but he did ask in this regard “to adhere to the law and the system without losing confidence in judges and prosecutors.” He does not believe that the political debate should go beyond strict compliance with the law as for any citizen, but he did say that he felt, like everyone else, “disgusted” with the information that appears every day about Juan Carlos I.

Already in the course of his conference, and after ironic with those who place him closer to Podemos than to the PSOE, he focused on the objectives of sustainable development and peace, such as the alpha and omega of any civilization project and the advancement of The humanity.

“The destiny of this 21st century, after the 2008 financial crisis and the COVID-19, will decisively challenge us. In the first, you can be wrong. If you are wrong in the second, the failure of the century will be inevitable “he concluded.