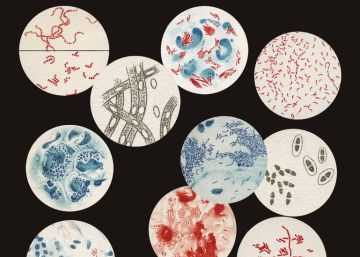 There is, it could be said, a comfortable science fiction, which invents from the archetype. It is limited, that science fiction, if you can limit a genre that tries to make everything possible, to imagine other worlds. It shapes them from a non-changing language that in no way distinguishes itself from what shapes a realistic story. That science fiction imagines those other worlds without building them. We are talking about literary science fiction, that is, science fiction that builds words. Comfort, in that sense, would consist of forgetting the form and focusing on the background. In inventing, as we said, those other worlds from a rigid language, already invented, that belongs to this world, that does not come, nor does it intend to come, from any other place. And then there is the Other.

Yuri Herrera (Actopan, Mexico, 1970) and the 21 stories of Ten planets, so brief - barely exceeding 3 pages, some not even 2; in few and brilliant exceptions, 'Zorg, author of El Quijote' and 'Los conspiradores', the 10— as exuberant, in substance and form, belong to that other category: that of science fiction that seeks not only to imagine a new world, but to create it from a language - and not just a language, a structure, a whole - that invents and discovers new corners, allowing the sensation of fascination with a new world to be extrapolated to what is read and the way in which That reads. An almost allegorical example. The cosm The cosmonaut ’nose reader tries to make that strange nasal language understandable that only he seems to understand what he calls" the extra-narrative world. "

Without losing its playful nature, that other science fiction of Herrera that is pure literature, explores, from attractive and exotic and sometimes dark places and characters, the ephemeral existence - from the death of a bacterium that becomes aware that It is someone and does it in the small intestine of a former manufacturer of fake documents from Norfolk, England ('Whole') -; the self-destructive condition of art - from the bailiff with self-destructive desires of what seems like a criminal to, yes, really monstrous monsters ('The art of monsters') -, or the basis of all civilization - cultural appropriationism, or overlapping from one world to another that was really always the same ('The conspirators') -.

And it does it crossing, as it happens in ‘Obverse’, “apices and apices”. "Deserts of apexes and mountains of apexes and mountains of apexes", for example, making use, as we said, of the word, in an inconceivable context, playing to destabilize or also suspend not only the reality of what was told, but also the of how it is being counted, what manages to double and happily move the reader away from the known, placing it, placing the entire human condition, on the other side of the mirror. As in the very short ‘Catalog of human diversity’, the human being is seen as being one of a kind in an extraterrestrial zoo. The boring official, Potocki, who tries to make him react from external agents does not have the slightest idea of ​​the vast universe that, like each of Herrera's lucid and devour stories, hides inside.