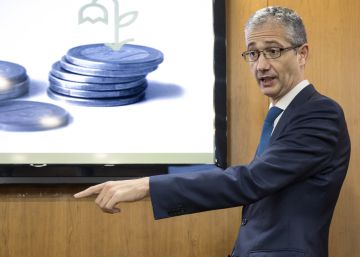 The Bank of Spain defends that young people are the hardest hit of the Great Recession. His figures paint an impassable generational wall. With data from 2016, households with a head of household under 35 had an income 18% lower than families of that age in 2010. And this despite the fact that in 2016 the total income before taxes already they had recovered the levels of 2010. In equity, the numbers are even more crude: while in 2011 a young household had a net wealth after debts of 71,600 euros, in 2017 it barely amounted to 5,300 euros. No other age group has suffered such a brutal crash.

These statistics belong to the 2017 Family Financial Survey, published on Thursday by the Bank of Spain and prepared with a sample of 6,413 households in collaboration with the INE and the Tax Agency. Their figures are disclosed every three years and calculated with medians to present a more representative sample by cleaning those cases that are extreme and distort the results. The income before taxes and contributions of a young family has gone from 27,700 euros in 2010 to 22,800 euros in 2016. The contrast with households whose head of household is a pensioner seems obvious: their gross income has jumped from 20,000 euros from 2010 to 25,500 of 2016. If the means are used instead of the medians, the differences are even greater.

The increase in the income of retirees is due, in part, to an increase in their income. But above all new pensioners with better work careers are joining and, therefore, with the right to a much higher benefit. That is to say, there is a compositional effect by which old retirees are replaced by more recent ones with higher pensions. On the other hand, the young households that are being formed face a scenario of high youth unemployment, high temporality and wages of entry to the labor market significantly lower than those of their predecessors.

As has already been argued in other studies, the Bank of Spain considers that there is a high generational component in inequality. And these figures show that young people were the main victims of the destruction of employment experienced with the crisis. It has been easier and cheaper to fire them by having a larger proportion of temporary contracts. On the contrary, pensioners saw how their benefits were preserved from the blow of the crisis. Successive governments have always argued that the elderly serve as support for many families and that they have a much smaller room for maneuver in the face of changes in their income. Hence they have protected their income.

In other countries, pensioners are among those who most reduce their assets as they retire and pull savings. However, the Bank of Spain survey reveals that they are the group whose wealth less diminishes.

In addition, access to a house among young people collapses. In just three years, the rate of ownership of a regular home has fallen sharply: 8.3 points. Also for the lowest rents: 6.7 points. And that has made the total proportion with own housing decrease. From 80.4% to 75.9%. In clear contrast, the weight in the wealth of other real estate has increased. It follows that young people buy less and rent more, while older people, with higher incomes and wealth, buy to rent and act as landlords, sources from the Bank of Spain explain.

But there are not even conditions to move to rent. Between 2012 and 2017, the percentage of young people staying at their parents' house has increased. Now just half of the people between 25 and 29 years old live with their parents. And between 30 and 40 years, one in four. Supervisor sources emphasize that the survey draws how the incomes and assets of those who are young today have evolved compared to those who were before. And they are clearly inferior.

In the opinion of the agency that directs Pablo Hernández de Cos, it is necessary to help young people by improving the rental market and facing the excessive duality of the labor market between temporary and indefinite. Although the Bank of Spain does not point it out, all academic studies say that it is lost of income in the first years of career then it moves to all working life.

Between 2013 and 2016, gross average incomes have improved for all groups up 9.7%. But above all the lower incomes have been recovered much more by the improvement of employment. The increase in pensions also influences. In 2016, the income of the families was restored until practically reaching the level of 2010, says the Bank of Spain.

The average and median income rises as normal with age, until reaching its maximum in the group between 55 and 64 years. Income also rises with the level of education. And it is substantially higher when a head of household owns university studies. Households where the head of the family works on their own account usually have higher incomes, although that is not precisely what is apparent from the statistics of the Tax Agency.

In short, income inequality has been cut. That said, the distribution of wealth has instead been much more unequal. Especially because of the negative evolution in households under 35 years old. In addition, the wealth of the richest has resisted a little better.