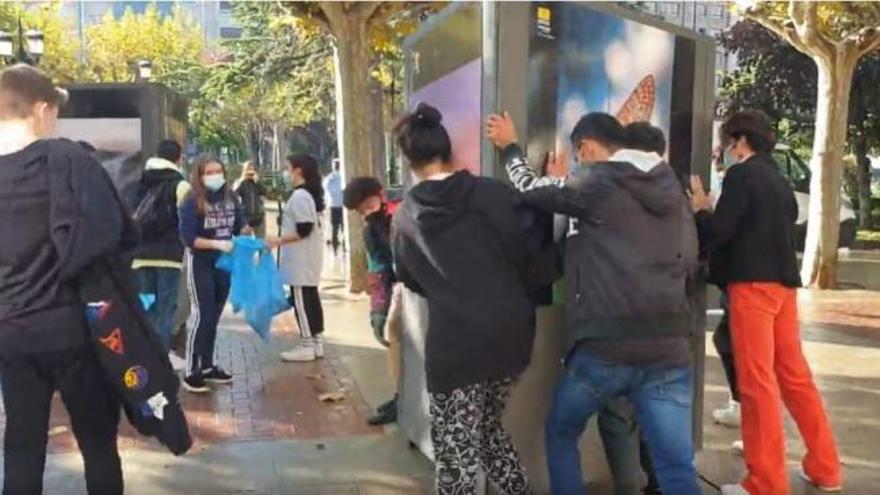 About twenty teenagers from Logroño they have organized to clean, from the early hours of this Sunday, the destruction of the incidents that occurred yesterday afternoon in the capital of La Rioja and relocate the furniture urban damaged by the riots caused by some 150 radicals, mostly young.

The author of the initiative is Pablo Alcalde, a 16-year-old boy and the son of a street sweeper, who has detailed to Efe that, seeing yesterday what was happening, what he has described as “embarrassing”, he began to mobilize his group of friends through social networks to try to organize and set an example to the citizens of Logroño because “not all young people are the same.”

Mayor, who was in the area when the events occurred and he went home “because it was scary”, added that he was surprised by the response his initiative had received and this morning, at 09:00 a.m., a group of twenty young people gathered in the central Paseo del Espolón, all of them provided with masks, gloves, bags of plastic and some brooms they bought to clean up the mess.

This young man, a high school student at the IES Batalla de Clavijo de Logroño, has specified that the city has dawned “quite clean”, but, even so, has stressed that there were, in the area of ​​the containers where the riots occurred, rubble of bottle glass, crystals, stones, loads of firecrackers and flares used by radicals, as well as sewers deployed from their place.

They have also placed part of the panels of an exhibition located on the Paseo del Espolón and that the violent people destroyed.

“Not all adolescents are the same. There are young people who are aware of what is happening and what happened yesterday evening was not a demonstration, but an act of vandalism, “he emphasized, while expressing his gratitude to the rest of the young people who have joined this initiative.

The mother of this young man, who has been a sweeper for 16 years, has told Efe that she feels “very proud” of her son and has hardly been surprised by what he has done with his friends because “I know him, I know how good he is. it is”.

“He wanted something for me and for my colleagues because he knows that not all people value the work and cleaning work that we do every day.”

The youth of our country is this: generosity, responsibility, commitment. Values ​​that enhance us as a society.

Thank you for your admirable reaction today in La Rioja.
Our strength is in being able to count on each other. Let us continue to fight the virus with unity. https://t.co/PBt53T7KVz

The President of the Government of La Rioja, Concha Andreu, in a tweet, has valued this initiative and said: “you are the image of how Spanish society is: unique and committed to the common good. Thank you.”

For his part, the President of the Government of Spain, Pedro Sánchez, also the social network Twitter, has pointed out that “the youth of our country is this: generosity, responsibility, commitment. Values ​​that enhance us as a society”, to which He added “thank you for your admirable reaction today in La Rioja”.

“Our strength is in being able to count on each other. Let us continue fighting the virus with unity,” he stressed.