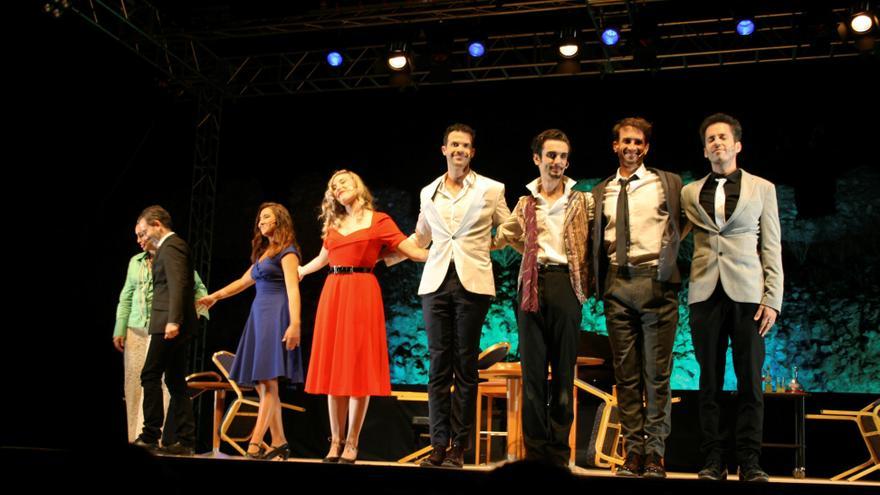 Olmedo (Valladolid), Jul 28 (EFE) .- “Jóvenes Clásicos” has fulfilled a dream: performing “El caballero de Olmedo” with its version, “Songs of Olmedo”, in the cradle of this work by Lope de Vega, and His enthusiasm and dedication has infected the public, who have appreciated this fresh, cheerful and very accessible adaptation.

One of the objectives of the director of this company, José Carlos Cuevas, is “to bring the classics to all audiences”, and this he has more than achieved, in an intelligent way, with successful musical pieces that adapt like a glove to the history of Lope -merit of Nacho Doña-, and that allows to open this genre, even to the smallest.

“We must ensure the future of the theater, and continue to create spectators,” he told Efe Cuevas, who has been able to see how this creation emerged “thanks” to the appearance of the pandemic, becomes great on the stage and strengthens that communion and social coexistence that has been lost in recent months.

And it is that “Songs of Olmedo” emerged as a collaborative project with the University of Los Angeles, within the framework of the Festival of Classical Hispanic Theater “The scene”, which sought to keep the flame of the theater alive during the global health crisis, projecting the contest via streaming.

The young Andalusian director had already fallen in love with the work of Lope de Vega when he participated in the version made by the National Classical Theater Company a few years ago, of which he was attracted by the “musicality of the verses”, hence he opted for transfer the same on the tables, in the broadest sense.

In addition, it is “a reduced version, which was adapted to the format required for the new live projection (streaming) of the ‘La scene’ contest”, and which represents an ‘essence’ of Lope’s verses, centered on that lyric that leads the love triangle of Don Rodrigo, Alonso and Inés.

“For us it is a dream to be able to premiere the work with an audience in Olmedo, a place where they know it very well, hence we have also attended with the utmost respect and with great responsibility,” said Cuevas, for whom the show This Wednesday in the Valladolid town has been “a milestone” for his company.

Precisely, that passion with which they have faced this challenge is what the spectators who have attended the representation, within the “Olmedo Clásico” festival, have cheered, together with the showiness of the montage and the good work of the actors, who have shown a chameleon ability to adapt to the stage.

The plot moves to the United States of the 50s, whose characters interact in a club where jazz and blues take on special relevance, but without forgetting the story of love, heartbreak, jealousy and envy that surrounds the relationship between the protagonists, and who have come to life more than ever on the Olmedan stage.

For this reason, it is important that the theater continues to have the support of the public, return to the companies the effort they have made during the pandemic to entertain people, so that culture does not stop, and for that it is also necessary that programmers and institutions are involved in this action.

“Young Classics” has put all the strength and courage to continue and, despite its short history, in its four years of life it has been sowing to be able to reap the harvest little by little, with this novel proposal, and with others such as “Marco Bruto. On treason” or “The avengers of women”, to which “Fuenteovejuna” will be added shortly.