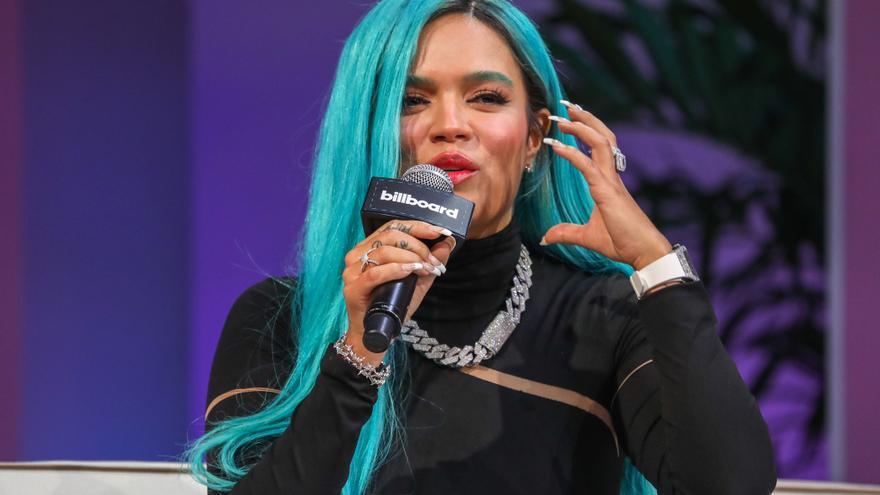 Miami (USA), Sep 21 (EFE) .- Karol G highlighted on Tuesday the sacrifices made to place himself at the top of the urban genre, in what has been a trajectory sustained by a single mantra: “You have to wake up saying: ‘ I’m fucking number one. ”

The Colombian has been one of the most important figures on the first day of Billboard’s Latin Music Week, which is held in Miami Beach (USA), and in which she took the opportunity to announce the publication today of her new single, “Everything was screwed up.”

In a conversation with Leila Cobo, the head of Latin music at Billboard, the singer explained that feeling “the ‘fucking’ number one” implies being “disciplined, hard-working, looking for ways out and ways to stand out.”

“I hate adversity, I cry for everything and I take it personally, but if something is clear to me is that the best comes from the crisis,” said the interpreter of “Bichota”, who confessed to being “very meticulous” and an artist who likes “be aware of absolutely everything” that surrounds the publication of his music.

She noted that both she and other urban music singers have gone through a lot of sacrifices to get where they are, but was happy that the discussion about female artists in a genre that was predominantly male is already a “past page.”

In that sense, she said that the question is no longer how does it feel as a woman to be singing reggaeton, but “what does it feel like to lead, to be leading this genre”.

The singer of 26 hits on the Billboard charts, 12 of them in the top 10, revealed that for a time she gave up music and went to New York and then Boston to learn more about the music industry.

“I came across proposals from people who made me feel very uncomfortable,” the singer recalled about her early years in the industry, which she started at age 14, and which motivated her to hang on to her dreams of being a singer.

He said that the decision to emigrate to the United States led to a discussion with his father, his great supporter and supporter throughout his career, as he highlighted during the talk.

He pointed out that “Mi Cama”, the first great global success of the Colombian and that aroused a great controversy at the time, achieved in its first 24 hours 16 million reproductions, a mark that has not been able to repeat with any other single.

The Medellín-born singer said that “Tusa”, another of her global hits, marked her generation and was heard even in countries where Spanish was not spoken: “We were number one everywhere,” she said.

Unfortunately, the tour that he was going to embark on after the publication of the song had to be canceled due to the covid-19 pandemic, a situation that led to a “horrible depression”, as he confessed.

“I was blocked at 200%,” she recalled, but added that the song “Bichota” emerged from that situation.

Billboard’s Latin Music Week, the series of conferences that precedes the annual Latin Billboard awards gala, which will take place this Thursday 23rd, began this Tuesday at the Faena Forum in Miami Beach, in South Florida.

The day had the Dominican Natti Natasha as one of its protagonists, to talk about the “blessing” of being an artist and a mother at the same time, as well as the Puerto Rican Farruko, who told details about an upcoming documentary about her career that will broadcast the HBO channel.

In the awards gala organized by the specialized magazine Billboard, the urban music singer Bad Bunny is the favorite this year, with 22 nominations.