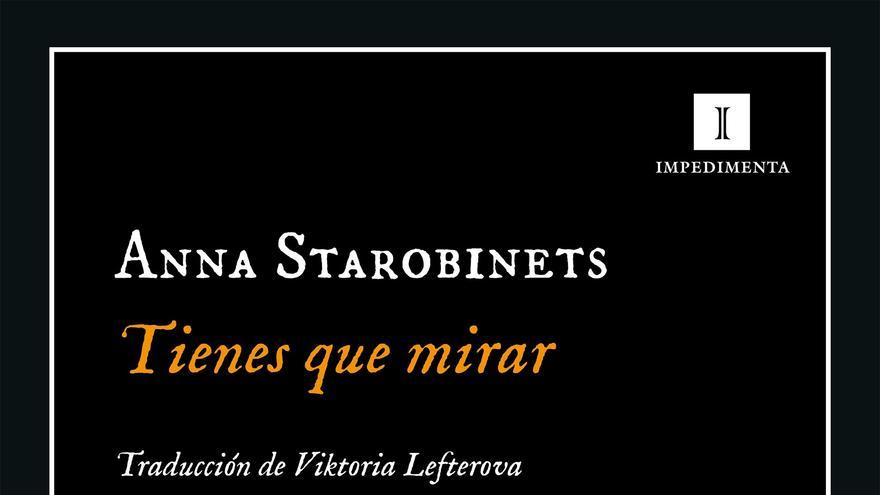 Madrid, Jul 20 (EFE) .- The Russian journalist Anna Starobinets does not consider herself a “strong woman”, but she is, something that the reader will verify after reading her novel “You have to look”, a book where she narrates the nightmare of having an abortion in her country for having a high-risk pregnancy, one more face of “sexist violence.”

Because in Russia, as denounced from the first to the last page, those women who have to have an abortion due to a high-risk pregnancy are forced to live an ordeal that has needed to count in this kind of “useful” vital guide, such as This is how he wants it to be “You have to look”, according to Efe in an interview on the occasion of its publication in Spain (Editorial Impedimenta).

And that is what Starobinets (Moscow, 1978) recounts in this book, that “horror story” that started at the moment in which in a routine visit to the gynecologist they told him that his “mini badger” would not survive the given birth. who suffered from multicystic renal dysplasia.

“I wanted to face my problem and tell my story because in Russia there are no books like that, since the subject of childbirth is a taboo subject in society, the cases of women who have to abort are silenced and I think a book was needed well, useful, that’s why I’ve written it “, she says about this work that has not been” cathartic “while sipping an iced tea to combat this heat that leads her to ask:” How can you survive? ”

A question that seems ironic in the face of that personal drama that begins at the moment when you have to decide whether to continue with the pregnancy, despite knowing that the baby will not survive more than an hour after birth, or interrupt it and thus avoid that physical pain to that creature.

A pain that rises to the nth degree when she decides to have an abortion, because it is from that moment that the protagonist faced two of the many faces of “sexist violence” in her country: the Soviet health system and Russian society, that which criticizes and labels women who decide to have an abortion as “murderers”, is the reason why this decision is made.

Because in Russia, “believing in miracles is natural”, “praying is natural”. “What is unnatural – he says – is when prayer and medicine, diagnosis and faith, exchange their positions.”

A reflection to which this journalist did not bow down and, instead of submitting and keeping quiet, she preferred to confront those opinions that women in her situation left on the internet, as well as the criticisms they received from that society that branded them “” killers. ”

“I wanted to know what I was going to face, that’s why I read on the internet, and I didn’t take criticism seriously,” admits Starobinets, well known in Russia for her children’s books and her work on screenplays for film and television.

Although the most painful part of “You have to look” is that in which she tells about her experience in those health centers and professionals to which she went for an abortion, places and people whom she cites with their own names, because if something does not have the journalist is fear.

“Soviet health care is very violent for women, when women go to give birth they tell them to be quiet, not to cry, and this is normal. There is no respect when you go to the gynecologist,” he says while acknowledging that the The first time she felt treated like a woman is when, together with her husband Sasha, she made the decision to go to Germany for an abortion thanks to the financial help of friends and family.

“There was the first time that a doctor put a sheet over my legs and covered me. In Russia they don’t, you open your legs and you feel like a piece of meat. Gynecologists explore you and never use that gel, and that. it is very painful, that is why women do not want to go to the gynecologist “, he explains about this practice, to which is added the fact that men, or any family member, can accompany a pregnant woman to her medical consultations.

“I have not been to the gynecologist for a long time, when I have had more money because I have been more popular I have saved to go to private clinics,” he confesses about what he describes as “sexist violence.”

As he admits, after the publication of the book in Russia he has not had “problems” with the Putin government, but he has suffered the wrath of society, including his own environment: “Many people told me that I was monetizing my life, that I wrote it to become famous. This made me very angry. ”

A fury that she was able to share with her husband, Sasha, a “talented man” who believed in freedom and who accompanied her during this vital process. But Sasha died when they both managed to father another baby, and that is why, for Starobinets, unlike much of Russian society, believing in God is something “impossible”.

“I lost the possibility of believing in God after the death of my husband; before this I thought that there was God but in a different way. When my husband died it was clear to me that there was no God,” concludes this chronicler of a reality that wants me to is known and reaches both men and women around the world.

Tags: abort, Anna, do you have, look, nightmare, Russia, starobinets