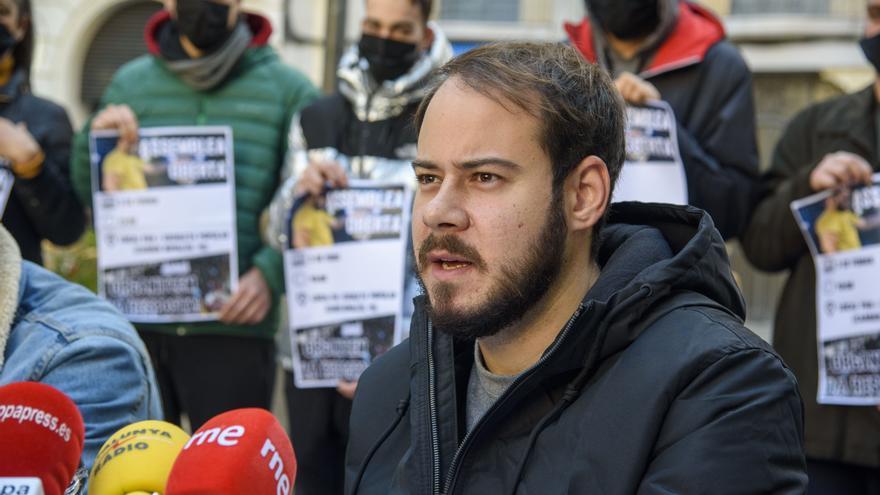 The rapper Pau Rivadulla, known as Pablo Hasel, whom the National High Court has given until Sunday to voluntarily enter jail, has affirmed this Monday that PSOE and United We “are being guilty, direct accomplices” of his entering prison . “You don’t have to agree with me to see that this is an attack on freedom of expression,” he said at a press conference in Lleida this Monday.

Last Wednesday, the National High Court gave Hasel 10 days to enter prison and serve a sentence of nine months in prison for a crime of glorifying terrorism, and insults and slanders to the monarchy and the State security forces and bodies for the messages he wrote on his Twitter account and expressed in his songs posted on YouTube, in one of the first cases in which those convicted of so-called ‘opinion crimes’ ended up in prison.

“The most probable thing is that on Sunday they will come looking for me to imprison me,” said the rapper, who has remarked that he will not voluntarily enter jail and will wait to be arrested. His imprisonment, he defended, is not an attack not only against him, but “they are using him as a scapegoat to scare the rest.” “Only mobilization can achieve improvements, not only my freedom but ours, and hopefully all this response will make me the last to have to go through all this, it takes a lot of mobilization for the State to back down,” he added.

As he has stated on other occasions, Hasel has insisted that he is not going to ask for a pardon and that he was considering exile, an option that he considers respectable but that he has ruled out. “If what they seek is to silence the message and that others do not reproduce it, the fact that they imprison me will achieve the opposite and may be more profitable for the cause than being exiled,” he said. In this sense, he added that he has seen in the case of Valtonyc, that “his exile has not created much solidarity, his situation has normalized.”

The decision of the National Court came after the Constitutional Court (TC) notified in November that it was inadmissible for the appeal that Hasel presented against his conviction, which was previously confirmed by the Supreme Court in June. Hasel was sentenced to nine months and one day in prison by the Appeals Chamber of the National High Court in September 2018, as well as the payment of a fine of approximately 30,000 euros. This court reduced, however, the initial sentence of March 2018 imposed by the Criminal Chamber, which amounted to two years and one day in prison.

According to the Supreme Court, the artist published on his Twitter profile – which at that time had more than 54,000 followers, today more than 100,000 – more than 60 messages between 2014 and 2016 in which he praised the figure of ETA members, such as the case of the former military chief of the terrorist gang, the late Joseba Arregi, who said he died tortured by the Police and the GRAPO as Isabel Aparicio, arrested in October 1979 and “exterminated as a communist”, according to his publications.

He also included tweets on his account that incorporated videos that incited violence, with comments that are considered extolling terrorism and humiliating for the Crown and other State institutions such as the State security forces and bodies. To this they added that in up to 1,915 tweets the words GRAPO, Monarchy, Borbón, Rey, ETA, terrorism, bomb, Police and Civil Guard appeared. Faced with the allegation that these messages were based on freedom of expression and opinion, the Supreme Court pointed out that this right “has some barriers” and is conditioned “by other rights and constitutional requirements” such as respect for the other and for ” the prohibition of conduct of praise of terrorist activities that fosters a favorable climate for their reproduction or becomes the germ, remote but real, of new actions of this nature “.

The sentence was passed with the vote in favor of the conviction of three magistrates, although it had the private vote of two magistrates, Miguel Colmenero and Ana María Ferrer, who pointed out that neither the Twitter messages nor the lyrics of the song “reach from the objective point of view is the range of criminality that corresponds to the crimes for which the sentence is issued. ”

Apart from the sentences imposed by the National Court, Hasel was also sentenced to six months in prison by a Lleida court for attacking a TV3 journalist while covering a press conference on a student confinement at the city’s university.