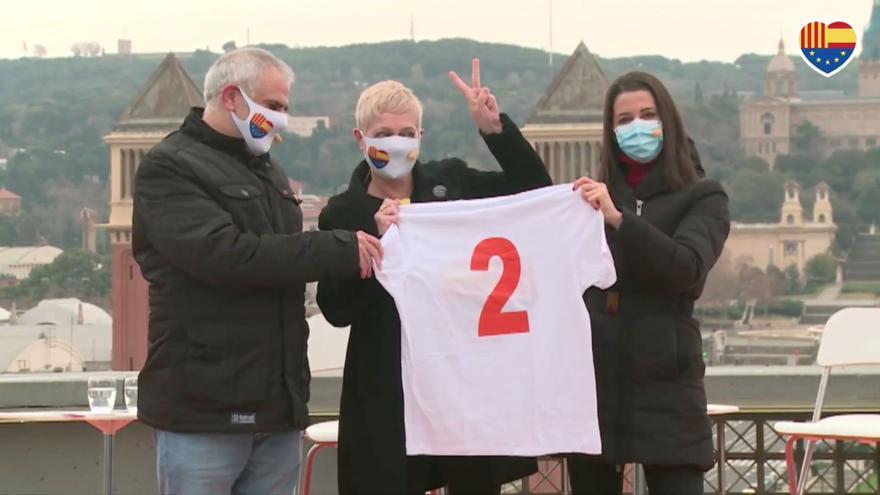 The political situation in the United States, after a mob of Donald Trump supporters stormed Congress on Wednesday, has crept into the speeches of Spanish politicians of different stripes, who have not avoided drawing comparisons and parallels that are convenient to their interests. One of those who has immersed herself in this has been the leader of Ciudadanos, Inés Arrimadas, who has spoken at length on the subject at an event held in Barcelona together with the number one of the Catalan candidacy, Carlos Carrizosa, and his rRecent signing as number two, Anna Grau. “You cannot repudiate what is happening in the US and defend the attempted assault on Parliament or that surrounds Congress,” he defended, after blaming “populists and nationalists” for what has happened in the Capitol.

According to Arrimadas, nationalism and populism are “two sides of the same coin” and has pointed out that “left and right populist discourses are alike.” The party leader has cited up to four alleged similarities between the extreme-right groups in the US and the Spanish “nationalists and populists”, such as the appeal to the “people” or the lack of respect and attacks on state institutions. , laws and justice.

“I think that if we look at what is happening in the US these days, and what is happening in Spain, obviously they are not comparable situations,” he said, “but what is indisputable is that both things must be condemned.” Arrimadas has also ensured that his is “the only party that without nuances and also being there in the front row that we condemn both”, in reference to the protests of Catalan independentistas before the Parliament and the demonstration of ‘Surround the Congress’ that had place during the investiture of Mariano Rajoy in 2016.

Both Arrimadas and Carrizosa, who have also referred to the Washington episode in similar terms, have avoided referring directly to the far-right or fascist groups. In the words of the leader, those who stormed the United States Congress were “hordes of uncontrolled madmen called by Trump.” “We in Catalonia know very well what that is,” continued Carrizosa, who has charged the president of the Parliament, Roger Torrent, for condemning what happened in the US while, as he said, “he refused to condemn an ​​attempted assault” of the Catalan Chamber.

Beyond the parallels with international politics, the event held this Thursday from the Plaza España in Barcelona aimed to present the journalist Anna Grau, who is incorporated as number two in the candidacy for the Catalan elections. Grau has assured that she joined Ciudadanos after seeing Arrimadas being insulted during an electoral day, a scene that she has assured that led her to want to enter politics directly. “You have to get involved in politics so that these things do not happen, not to thrive, not so that everything is beautiful,” said the journalist, who has been grateful to be able to join the training lists coming from the Civil Society entity Catalan.

Arrimadas has welcomed Grau praising his public role in opposition to the independence movement and considering that it is Ciudadanos where the “moderate voices” must be. As indicated by the head of the party, “in addition to showing that we can win over separtism, we have shown that we can govern and govern well,” she explained, on this occasion losing the opportunity to refer to the international context to talk about the governments in which it participates. Citizens who are supported by Vox. “Welcome, Anna, because it is necessary that people take the step and add all”, has thanked Arrimadas.