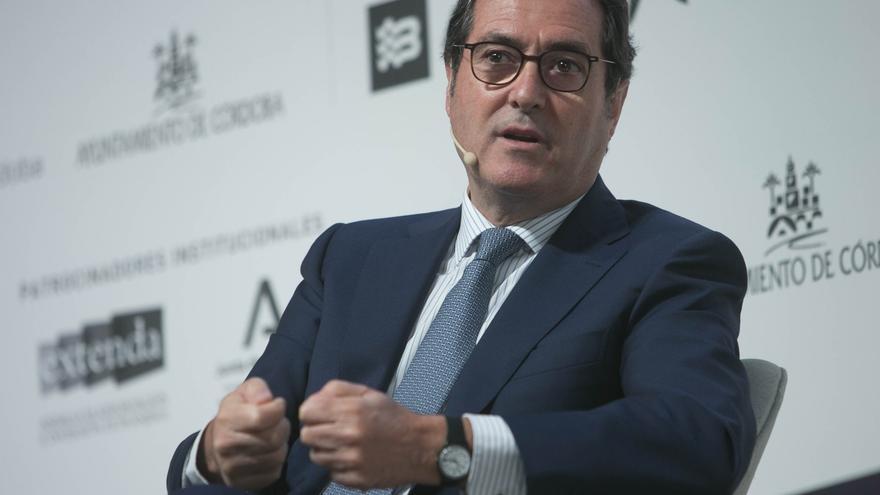 Antonio Garamendi, president of the CEOE, on Thursday raised the tone in front of the Government regarding the labor reform and pensions. The leader of the businessmen has criticized the “media noise” that has been generated and has charged against the Executive’s proposals that do not coincide with “the reforms that Europe demands.” Thus, it has charged against measures such as the reduction of the temporality that Work seeks in the negotiation with the social agents. “Temporality cannot be combined with precariousness”, Garamendi assured in a forum of the Spanish Confederation of Directors and Executives.

“We are going to work for an agreement but on the objectives that Europe sets,” Garamendi assured after his speech at the aforementioned congress, in which he coincided with José Luis Bonet, president of the Chamber of Commerce. Garamendi has shielded himself in this argument to reject the Government’s labor proposal. “Here they tell us about reforms or counter-reforms that are not what Europe is asking for,” he assured. “It is not worth it to me that now the bad guys are the businessmen when we do not agree with what is proposed,” he said. “We want seriousness and that there is no media noise that does not help to reach an agreement,” Garamendi insisted.

The leader of the Spanish businessmen has charged against the proposal that the Government has brought to the negotiating table with unions and employers this week. “Yesterday at the table they brought the same paper as a month ago, I do not know if the government has coordinated or not, but it is the same role,” he lamented, focusing on the proposal to reduce the temporality by 15%. “In their plans for 2050 they spoke of 23%, in 2050 it will be 23% but now 15%?”

He has also charged against the negotiation of the pension reform. “They brought us a sheet and a half to assess a proposal and with less than 14 days to give our answer, it is not serious,” he assured about the latest proposal that raises social contributions to cover the retirement of baby boomers. “The leaks cannot be allowed, it cannot be that the media had the document and the graphics earlier than we, who were asking for the data,” he said.

In addition, he has criticized United We Can, without citing them, regarding the first pension reform, which is currently in parliamentary proceedings. “We have found that, although when we signed, we complied despite being heterogeneous, part of the Government registers amendments to the pension agreement,” he pointed out. “How valid does the Government give me if a party corrects the agreements that are reached?”

With all this, Garamendi has ensured that currently businessmen “are more concerned about counter-reforms and the problems they generate than European funds.” “We go out to the field to play but it is the government that sets the rules for us, they must provide legal security, regulatory stability and quality of the standard,” he said, questioning whether this occurs in some government decisions such as the reform of the electricity bill, the rent law – “private property is going to be regulated” -, or the labor and pension reform. “We will do our job and we will do it well when we have the rules laid out in an orderly fashion,” he stressed.