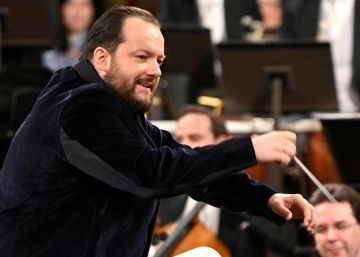 For an orchestra conductor, the Vienna Philharmonic invitation to take the lead New Year’s concert It is a privilege. This has been the case, especially since 1987, in Herbert von Karajan began the tradition of assigning each edition to a different director. But it is a privilege that should never be underestimated. That is the advice Andris Nelsons received from several colleagues, after accepting the direction of the concert this year. He was confessed by this Latvian teacher (Riga, 41), who combines the ownership of the Boston Symphony and the Gewandhaus of Leipzig, to the newspaper Der Standard, last December 27. For that reason, he said, he began working on the program a year ago until he developed his own idea of ​​each piece of the repertoire that has included overtures, waltzes, polcas and marches of the Strauss family and contemporaries. This year there have been nine developments, especially by Josef Strauss, in commemoration of the 150th anniversary of his early death at age 42, but also of his younger brother Eduard. There have been in turn compositions never before performed at the New Year’s Concert by Josef Hellmesberger Jr. and Hans Christian Lumbye. But the main novelty has been the music of Ludwig van Beethoven, for the first time on this date, in commemoration of its 250th anniversary.

Nelsons also received advice from his mentor and teacher, Latvian Mariss Jan-sons, recently deceased and three times director of this January 1 meeting in Vienna. “It is very important that you let the Vienna Philharmonic play,” he said. And Nel-sons has followed him to the letter. Moreover, he has danced with the orchestra. He already warned that he had nothing to teach in this music to the Vienna Philharmonic, so he has dedicated himself to inspire his musicians. And there is no doubt that he has achieved it.

The 80th edition of the New Year’s Concert started ideally. Nothing of a march, but an overture, of Karl Michael Ziehrer: his successful operetta The homeless, from 1899. A work very influenced by band music, with that initial march, but with passages of waltz that allowed Nelsons to take his first dance steps with the orchestra. He began, then, the first work of Josef Strauss, the waltz Greetings from love, dedicated to the centenary of the Salzburg Festival, as Michael Beyer recalled in his careful television performance. It was followed, by the same composer, the Liechtenstein March, where Nelsons made reality the “vitality, agility and charm” that highlighted the press after its release, in 1857.

In 2021 the chosen one is the Italian Riccardo Muti, who will direct the concert for the sixth time

And the music of Johann Strauss Jr. arrived, always the most represented composer at the New Year’s Concert: the polka Flower Festival, a composition that Lorin Maazel has only directed in the 1996 edition. Nelsons showed his own ideas with this music and directed much more slowly and playfully, something that the realization of Michael Beyer seasoned with beautiful firsts of the imposing floral decoration from the Golden Hall of the Musikverein. But the interpretation of the waltz was more interesting Where lemon trees bloom, as a tribute from Johann Jr. to Italy, with that reference to the famous fragment of the ballad of Mignon of the novel Wilhelm Meister’s learning yearsfrom Goethe. Nelsons knew how to masterfully link each section, which turned into an exquisite fresh sound. It was directed by Zubin Mehta, in 2007, and Welser-Möstm, in 2013, but Nelsons provides dramaturgy that combines that unmistakable way of “saying” the waltz of the Vienna Philharmonic. He closed the first part, another novelty of Eduard Strauss: the polka Suddenly. Here it was clear that, if the Strauss boy stood out on something, it was with this sparkling and light music.

In the interim, Georg Riha paid his personal tribute to Beethoven. A curious trip from the 19th to the 21st century, entitled Beethoven leaf swirls, which allows you to complete your Tenth Symphony, while we listen to several interventions with music by the composer of Bonn played by the members of the Vienna Philharmonic. It was the moment of all the retransmission where they participated more women in the orchestra, which were very little present in this edition, where we saw some new faces in the Viennese orchestra.

Nelsons opened the second part by displaying his size as an operatic director. A brilliant version of the operetta overture Light cavalry, by Franz von Suppé, from 1866. With the famous galop which represents the hussars, but also with the zingaro perfume of its beautiful clarinet solo. Before the first pre-recorded ballet scene, another novelty was touched: the French polka Cupidby Josef Strauss, where the Latvian director raised this minor composition. José Carlos Martínez, the first Spanish choreographer who collaborates with the New Year’s Concert, presented the waltz Embrace yourselves, millions of beings!, of Johann Strauss Jr., in the Winter Palace of Prince Eugene of Savoy. A title taken from a verse from the Schiller ode that Beethoven used in the choral movement of his Ninth Symphony, but that, in reality, hides a tribute to Brahms.

The Latvian director che complied with the traditional congratulation of the new year with an interpretation, exquisite and balanced, of the waltz In the beautiful blue Danube

The commemoration of the 150th anniversary of the inauguration of the Musikverein featured two of the three pieces that the Strauss brothers wrote. The waltz was more interesting Enjoy life, from Johann Jr., that the polka mazurca Frost flower, from his brother Eduard. Michael Beyer made, with his completion, a summary of the history and rooms of the building. And we hear between both pieces other novelties that worked as filler: the refined Gavotte, of Josef Hellmesberger Jr., next to Postillon Galopby Hans Christian Lumbye, the Danish Strauss. The last one served Nelsons to make the only funny wink of this edition: a timely intervention as a trumpet player, an instrument he played professionally, until 2001, when he dedicated himself to the direction.

The second pre-recorded ballet scene accompanied Beethoven’s only work on the show: six of his Twelve Contradances. José Carlos Martínez chose to innovate by presenting a kind of American comedy from the forties set at Beethoven House-Museum on the outskirts of Vienna.

But Nelsons faced the end of the program with the best of this edition of the New Year’s Concert. A sparkling and burlesque version of the fast polka Tritsch-Tratschby Johann Strauss Jr. and a reference interpretation of the waltz We dynamised (Mysterious forces of attraction), from his brother Josef. Neither Muti, in 1997, nor Barenboim, in 2014, have made that composer’s desire to translate into music the supernatural forces that seemed to hide in 1865 behind the dynamos.

The main novelty has been the music of Ludwig van Beethoven, for the first time on this date, in commemoration of its 250th anniversary

The Latvian director continued his party with the Philharmonic with the first of the three bises. This year was a sparkling polka In flightby Josef Strauss, who, in 1867, trying to emulate the flight of swallows. He fulfilled the traditional congratulation of the new year, with an interpretation, exquisite and balanced of the famous waltz In the beautiful blue Danube, from Johann Strauss Jr., which remains a kind of unofficial hymn of Austria and also a must for all the directors at the head of the New Year’s Concert. Nelsons tried, once again, to find his vision of the work within the tradition of the orchestra.

And, finally, Nelsons wore his power of suggestion and joy of making music with the audience of the Golden Hall in the traditional palm of the Radetzky March. This year a new version was touched to eliminate the adhesions of the Nazi arranger Leopold Weninger, although the differences were minimal. In 2021, Riccardo Muti will re-direct the New Year’s Concert. It will be his sixth time, with 79 years, and he will become the director who has directed it more times since, in 1987, it was decided that a different director would do it every year.