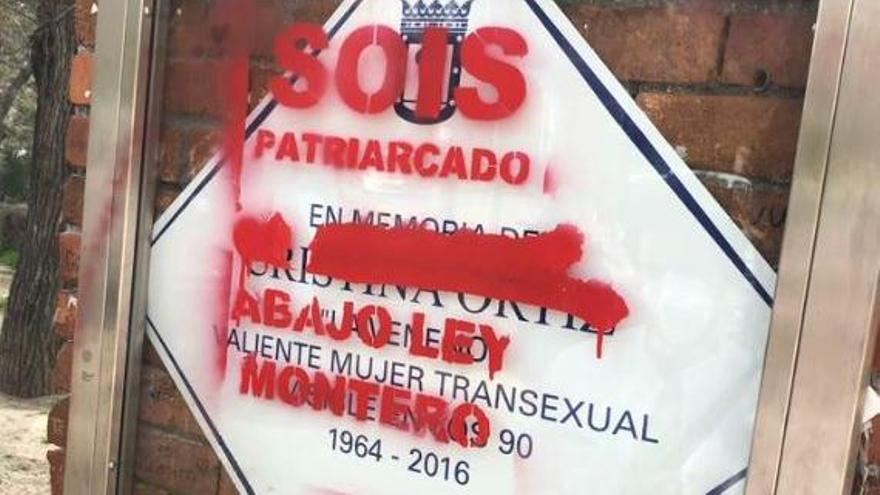 Just a few hours from March 8, the plaque that vindicates the figure of Cristina Ortiz, 'La Veneno', in the Parque del Oeste in Madrid has suffered a new act of vandalism. The graffiti were discovered by the people behind the literary blog Ecos y Tinta, who denounced the attack on social networks and were in charge of restoring the plaque with the help of several people who were in the park.

The messages "you are patriarchy" and "down with the Montero law" have appeared in red on the glass that covered the plate, in reference to the current debate about the Trans Law that tries to carry out the Ministry of Equality led by Irene Montero. It is not the first time that this claim in memory of Cristina Ortiz has suffered transphobic attacks: just a week after its installation it was uprooted the City Council did not replace it until a year and a half later, in December 2020.

The figure of La Veneno regained notoriety four years after his death thanks to the broadcast of the series 'Veneno', in which his story is told. After the issuance of the final chapter - in which it is explained how she asked that her ashes be scattered around the park where she was practicing prostitution for years, since she stated that it was the place where she had been freest and happiest - Followers came to the site to deposit flowers, photos and candles. This makeshift altar was finally removed by the City Council because the candles caused small fires.

Cristina Ortiz became popular in the 90s for her appearances in programs such as 'Tonight we crossed the Mississippi' and 'La Sonrisa del Pelícano' and died in 2016 after spending four days in a coma in the Intensive Care Unit (ICU) of Hospital La Paz de Madrid, to which she arrived after being found at her home with a blow to the head.

This new transphobic attack has been criticized by political figures such as Carla Antonelli, a socialist deputy in the Madrid Assembly and activist for the rights of trans people, who has described it as "vomiting hatred."