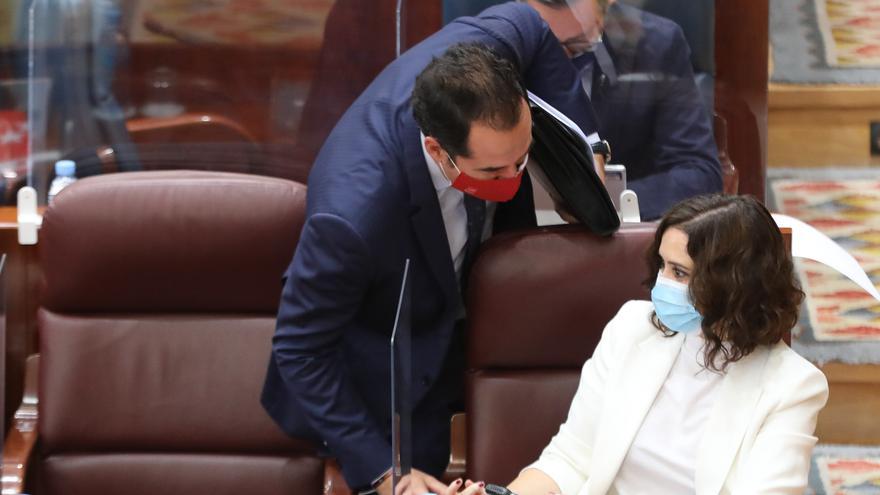 The confrontation carried out by the president of the Community of Madrid, Isabel Díaz Ayuso, against the central government is increasingly stark. But his government partner, Ciudadanos, has decided to distance himself from the strategy of the PP leader. This Thursday, the vice president of the regional government, Ignacio Aguado, has insisted on building bridges with the central administration to seek joint agreements in the fight against the pandemic and for this he has defended the Covid-19 Group of which he is part as the way to that consensus. “I am going to leave my skin for this group to exist,” Aguado said in the parliamentary platform where he was going to give an account of the steps of that working group with the Minister of Health, Salvador Illa.

For Aguado, everything that is “communication channels with other administrations are positive” and of course “there are not enough.” In this sense, he stressed that there will be a meeting again on Tuesday, which he hopes will be “fruitful.” “The future of many people depends on our ability to understand,” he remarked.

The problem is that the other side of the Government, the one represented by the PP, which is the one who makes the decisions, does not listen to the requests of its vice president. The opposition reminded him this Thursday of precisely that, that Aguado is a member of the Government and cannot act as if the president’s decisions were not with him.

“You are not a blue helmet, you are a member of the Government sits at this table … it should not be a placebo,” recalled the deputy of Más Madrid, Mónica García. In the same vein was the spokesman for United We Can-IU, Jacinto Morano: “You act as a mere spectator,” he lamented, while warning him that although he calls for a “cease-fire” between two parties that seem “alien” he belongs to the regional government. “You, who have the key, take us out in the cage in which you have put us with the support of Mrs. Ayuso,” Garcia concluded to ask him again to support a motion of censure that throws the Madrid president out of Puerta del Sol. ”

An accusation that also came from Vox, but to call it “unfair”: “For us it has been the Trojan Horse that Sánchez and Iglesias have used to apply the 155 sanitary and intervene in Madrid”, the deputy Íñigo Henríquez de Luna launched.

Aguado has advanced that he will take as a proposal to the next meeting of the Covid group that we must try to bring the accumulated incidence of the Community below 25 cases per 100,000 inhabitants. The opposition has made him ugly that he has not said how he intends to achieve it to which Aguado has replied that “it would be pretentious on our part to come with the magic recipe as politicians to end the pandemic.” And that he is not an epidemiologist.

The leading pistols of the day

The vice president of the Community began his speech by asking for “a political ceasefire” and for the “guns” to be lowered to be able to speak with “arguments.” “Today we have seen again how the pistols have returned to make an appearance, they have returned to be protagonists, of which I am not very proud,” said the leader of Ciudadanos in Madrid. For Aguado, it is necessary to lower “tension” and try “to be as practical and pragmatic as possible.” But the matter was not there and the worst part of the plenary session was yet to come.

The pistols have starred in much of the parliamentary day. If during Ayuso’s interventions, the president assured that the Government imposed the state of alarm “at gunpoint”, the PP later formed a show due to a gesture by the deputy of Más Madrid Mónica García that they interpreted as a “threat” .

During her speech at the vice president’s appearance, Mónica García has spoiled Serrano again that he does politics in this way and that his real “threats” are his “words” that point out to them every day “his false data, his mismanagement and your circus “. “Stop discrediting the institutions and their addition due to confrontation and lying,” the parliamentarian has launched, while Alfonso Serrano, along with the PP deputy Ana Camins have shown a photo of the deputy with the gesture that has made this tomorrow.

Serrano has asked for the floor by Article 135 of the Regulation and has once again accused García of being a “professional defamer”. He regretted that he accused the regional government of “stealing the money from Covid funds for other issues” with a “threatening gesture and with his hateful face, with his bile and with his sectarianism.” One more day at the Madrid Assembly.