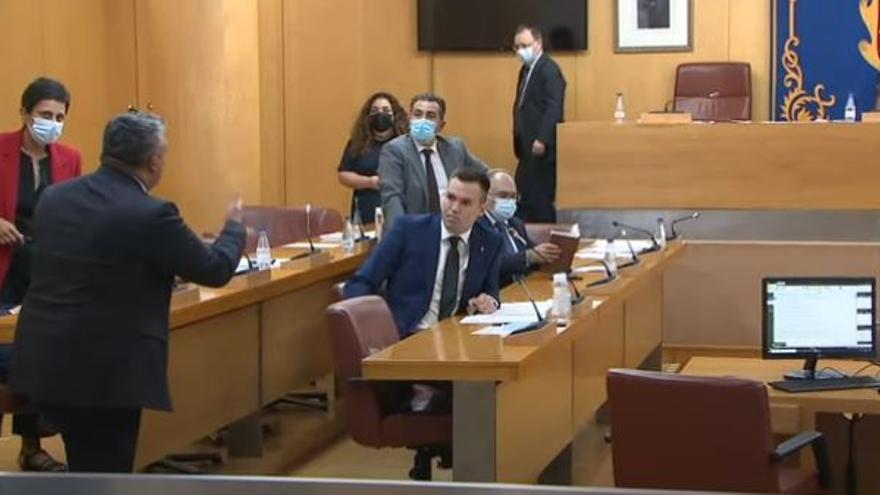 – “You are a scoundrel and you can’t with this type of people, you are a fascist.”

Thus, shouting between the Vox spokesman, Carlos Verdejo and the PP deputy and Minister of the Environment Yamal Dris, the plenary session of the Ceuta Assembly this Tuesday has been suspended. When it had only started for half an hour, the president of Ceuta, the popular Juan Vivas, was forced to stop it after the debate on the installation of a roundabout in the periphery led to a cross of insults and reproaches between Verdejo , and the rest of the groups on account of their behavior during the migration crisis unleashed by Morocco last week.

The Vox spokesperson has called it “shameful” that the Assembly has not convened an extraordinary plenary session on the “invasion” suffered and Vivas has attacked the attitude of his party during the crisis: “What seems to me a shame is that You did not appear all these days here, that you did not call to see what you could do for Ceuta, that several Speaker Boards were held and you did not appear to see what the position of this institution would be in one of the most serious moments of the history for this city. You were missing and I was proposing a defense strategy for Ceuta while Vox tried to burn Ceuta to the greater glory of populism, “he reproached you.

“I was not thinking about my voters, but about Ceuta and Spain, defending this city with the President of the Government,” said Vivas, of the PP. “The enemy was not in the Government of the Nation and his has been reckless folly: Ceuta is in need of calm, do not blame its omissions on others.”

The spokeswoman for the MDyC, one of the parties labeled “fifth columnists” in Morocco by Abascal, Fatima Hamed, has made Vox ugly that they “provoke to seek reactions that give them electoral revenue: they are national shame, a constant provocation and they expect revenue from the damage they do to Ceuta “. “You communicate by tweeting like a child and not like the spokesman of a Parliamentary Group: the rest of us have been at the foot of the canyon without looking for photos or headlines, at the disposal of our city for whatever is necessary,” he distinguished.

When Verdejo has recovered his turn to speak, Verdejo has responded to Hamed that “setting fire is proposing to declare persona non grata the president of the first party in this city, which is Vox.” “You will never have a deputy in Madrid like us, in any case you will have one in Morocco,” he snapped.

At that time, Vivas asked Verdejo to withdraw that phrase. “You are making the speech to Morocco and enormous damage to Spain,” he warned. At that time and after the Vox deputy refused to withdraw him, the Minister of the Environment Yamal Dris (PP) jumped in and both have argued loudly, first from the seat and then Dris has approached Verdejo’s seat. “You are not ashamed,” he repeated.

– “Yes, say it louder, and you are a soul of charity,” snapped the Vox spokesman.

As Dris left and the shouting ended, the rest of the games reproached: “He has already achieved what he wanted. He can now go to Madrid with his starter.”

About half an hour after the break, the plenary session has resumed.