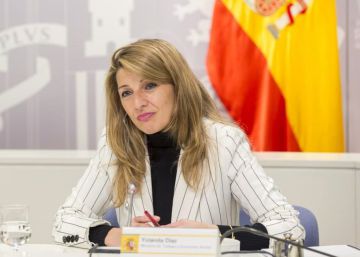 “Yolanda Díaz is already the best Minister of Labor in the History of Spain; and I am not mistaken if I say that millions of people on the left feel that she may be the next president of the Government of Spain ”. With this clear clarity, the United We Can leader, Pablo Iglesias, wanted to mark yesterday, whom he wants to be a substitute at the head of the party after his departure from both the Government and at the head of the purple formation.

Iglesias takes a step aside, and wants Díaz to replace him in the Executive, occupying the second vice-presidency at the same time as the Labor and Social Economy competencies but also announced that he wants to be his replacement as a candidate for the president of United We Can to the presidency of the Government in the next elections.

As Iglesias said yesterday: “In the last year we have consolidated the Government thanks to the Budget agreement.” It has been precisely the economic and social negotiations to reach said budget agreement that, in his opinion, “have clearly consolidated the leadership of some members of United We Can”, among which the figure of Yolanda Díaz stood out above the rest. . Although, in the announcement of his departure, Iglesias also mentioned the leadership to his number two, the current Secretary of State for the 2020 Agenda, Ione Belarra, whom he intends to promote as minister of this area and to the Minister of Equality, Irene Montero, who would remain in office.

With this enhancement of the budget pact and one of its main architects, the Minister of Labor whom he wants to promote as second vice president of the Government in a you to you with the economic vice president Nadia Calviño, Iglesias gives an obvious economic turn to power of Unidos Podemos within the Executive.

Diaz’s response came through Twitter: In this last year I have put all my effort into protecting employment and working people. This work, always hand in hand with social dialogue, is now joined by the challenge of the Vice Presidency. It will be an honor to continue working in this Government and with Pedro Sánchez ”, he wrote.

Diaz’s endorsements to occupy the second vice presidency, as Iglesias intends, are well known. In just one year of government, and with the immense difficulties experienced in this exercise, the Minister of Labor has led to the signing with employers and unions of eight major socio-labor agreements. As soon as he came to office, he started a rise in the interprofessional minimum wage of 5.5% from the employers to 950 euros. Subsequently, he has been one of the main architects – together with the head of Social Security, José Luis Escrivá – of the design of the scheme of temporary employment regulation files (ERTE) adapted to the Covid-19 crisis to maintain the employment of up to 3.6 million workers in the worst moments of the pandemic. Along with his initial negotiation, Díaz has also obtained the support of employers and unions for the three extensions of this ERTE design.

In parallel, it negotiated and again agreed with companies and trade union organizations an ambitious regulation of teleworking, which went from being practically non-existent in the Spanish legal system to being one of the most regulated frameworks of the European Union in this matter. It also negotiated the regulation of the rules on equal pay and equality plans, which also had the employer’s backing, until the last minute when CEOE-Cepyme decided not to sign, but which did have union support. And, just a week ago, the law saw the light that, in the minister’s own words, has been the result of the most difficult negotiation that has been carried out in the last year: the so-called riders law, which has regulated the working conditions of the distributors of the home delivery platforms and the access to the labor logarithms of all the companies. With this, it has been a pioneer in this type of regulation in Europe and has done so, again, with the backing of the employers and trade unions.

But no one is aware that the obvious and proven ability to negotiate and persuasion of Díaz now awaits the most difficult test: negotiating in the midst of the economic and social collapse caused by the pandemic, the dismantling of the 2012 labor reform, the companies cling to to rebuild themselves.

For now, it seems that Díaz has the support of Pedro Sánchez. And this gives him oxygen to continue trying to achieve labor, economic and social consensus. The distance of her militancy in United We Can, which she has manifested on occasions in public and in private (she originally comes from the Communist Party and the Galician coalition En Marea) and the independence that she has wielded within the Government would have helped her maintain the support of Sánchez.

Another war is the one that is opened to Díaz with the leadership of the purple party. Although those who know her assure that the loyalty that she professes to Pablo Iglesias makes it practically impossible for her to reject his order. He yesterday said that from the left “we must encourage and support Yolanda (Díaz) so that if she decides so and wants it, the militancy will be the candidate of United We Can in the next general elections and the first woman to be president of the Government of Spain ”. For his part, Díaz yesterday considered the candidacy of Iglesias to the Community of Madrid “brave and necessary”.

Vodafone closes all its own stores in Spain