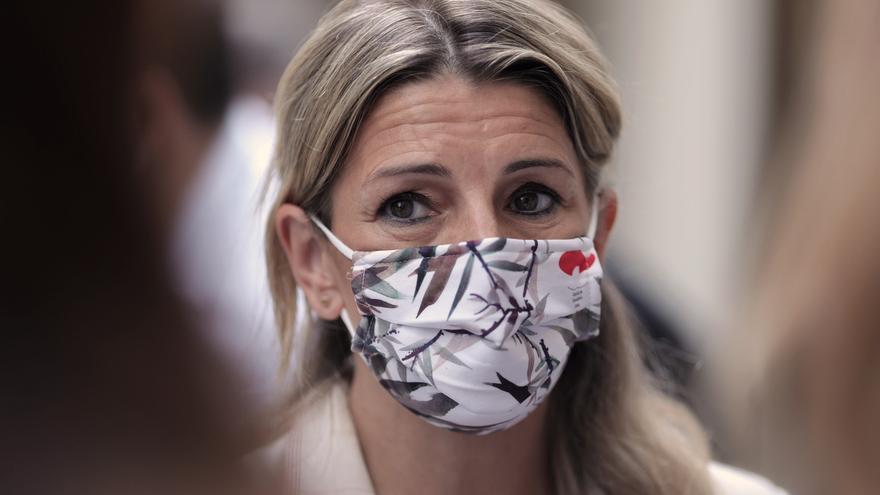 Yolanda Díaz is not enthusiastic about noise. He repeats it often and tries to prove it since his arrival to the Government, in January 2020. Partly because of this, who then presented himself as the Communist Prime Minister of Labor She has ended up being the minister and vice president of social dialogue and can boast a year and a half after having the most complete album of agreements with the businessmen of all the members of the Council of Ministers.

After receiving this spring and by surprise the double commission of Pablo Iglesias – to lead United We Can within the Government and to head the candidacy of that space in the next generals despite not belonging to any of the parties – Díaz chose to lower the decibels again. He did not say no, but neither did he say yes to the second of the commitments and it remains to be seen whether or not he will be the headliner in the elections that Pedro Sánchez insists on placing when they play, in 2023, after Spain occupies the rotating presidency of the European Union. While the second vice president thinks about it, she had taken that attitude of not gesturing more than necessary in the coordination of the other four ministries of United We Can within the Government.

But this week Díaz has begun to send some alerts inside the Government regarding two decisions on very sensitive issues for the space he represents: the future extensions of the El Prat and Barajas airports –3,000 million euros of investment that match regular with the green commitments and the 2030 agenda of the Government– and the authorization of the Naturgy takeover bid, a very sensitive issue for United We Can, which now sees the price of electricity rise from within the Government, in an escalation to which an end is not predicted and which was one of its arguments in successive campaigns to ask for the vote.

The announcement of the investment of 1,600 million in the El Prat airport caught Yolanda Díaz by surprise, as happened to the rest of the ministers of United Podemos, several of the PSOE and even the mayor of Barcelona, ​​Ada Colau, which has since emerged as the strongest detractor of the project, which he came to describe as a “big hit”. “Developmental policy whose results we already know,” Colau said in a interview on Cadena Ser Tuesday night, hours after the agreement between the Government and the Generalitat. In that talk at Hora 25, the mayor clarified that she was not only speaking for her because all her space shared that diagnosis and expressly quoted Vice President Yolanda Díaz.

True to her style of not overreacting or airing discrepancies in front of the microphones, the second vice president transferred her discomfort to the newly appointed Minister of Transport, Raquel Sánchez, and the head of the Ecological Transition, Teresa Ribera. Ribera herself, who appeared after the Council of Ministers together with the minister spokesperson, Isabel Rodríguez, limited herself to dispatching the agreement to expand the Catalan airport with good words about the necessary respect for the environment and without much enthusiasm. Government sources assure that Díaz made those calls, before taking a few weeks off, to set the position of his party, warn of his concern and announce that United We can be vigilant when the fine print of the agreement and the repercussions are known that the El Prat project will have not only on the land where it will finally be projected but also due to the increase in emissions that it entails and the consequences on mass tourism that the Government of Barcelona has been trying to limit for years.

While Colau exhibited all the harshness against the pact of the Government and the Generalitat, whose leaders warn that it will be the greenest airport in Europe, and asked that citizens be treated “with respect”, Díaz has for the moment expressed his disappointment within of the government. A clear message from a leader who has always avoided tensions within the cabinet, but who tries to make people see despite the fact that airport policy is not in the Government pact

The outward protests have been left in the hands of the deputy and ecologist Juantxo López de Uralde, founder of Alianza Verde, who assured that the pact with the Generalitat “is not a correct decision” and once again recalled that we are in a “climate emergency” . “We must stop being euphemisms and say that a policy for the future involves a reduction in infrastructure,” concluded Uralde in an interview on Cadena Ser, alerting the government of which his own party is part.

Also this Thursday the spokeswoman for United We Can in Congress, Sofía Castañón, charged in an interview on RNE against the Government’s plans and added: “What we say in the media, obviously, we say in spaces where we have the possibility, the privilege and the capacity.” An allusion to the messages that Díaz sends from within.

From the outside, the announcement of the airport expansions had given More Country ammunition, Errejón’s party that defines itself as a green and feminist force and that has not stopped charging against the Government in recent hours for the contradiction implied by the announced 2030 agenda and Sánchez’s commitments to reduce emissions and that commitment to increase the two airports with the highest capacity. United We can try to avoid that the contradictions involved in being part of a coalition government being in a frank minority leave an open highway in fields very sensitive to its electorate for the Errejón party, which has just reaped a great result in the Madrid elections .

The second alert from the ministries of United We Can to the Government corresponded to the Department of Social Rights, led by the new leader of the party, Ione Belarra, against the decision of the Council of Ministers to authorize with some conditions the takeover that the Australian investment fund IFM has launched to take over 22% of the shares of the energy company Naturgy.

Belarra, also a member of the Council of Ministers, warned through a Twitter thread that Spain “loses the opportunity to protect its energy sovereignty, which is key to firmly committing to climate neutrality and to guaranteeing affordable access to energy for all citizens”. Belarra did not act on his own, according to the sources consulted, Díaz was not only aware of and agreed to uncheck United We Can from an action that comes at a very delicate time, with electricity prices setting record highs and without the Council of Ministers has managed to stop them, beyond the provisional measure of lowering VAT on the electricity bill. The second vice president herself, who represents the wing opposite to the one responsible for economic policy and first vice president, Nadia Calviño, also expressed her party’s disappointment.

United We can add these two disagreements to the internal lawsuits of the Government for the revaluation of the minimum wage and the limitation on housing prices, as well as the differences over the monarchy reflected this week by the criticisms launched by Belarra herself, also from Twitter –and that were not commented on or endorsed by the president or by the socialist wing of the Government–, before the “serious democratic anomaly” that in his opinion means that Juan Carlos I is still on the run of Spain a year after his departure, when his opaque fortune is being investigated by the Prosecutor’s Office and the Treasury. However, Díaz reserves the letter from Pedro Sánchez, the same one that Iglesias used to discuss face-to-face with the president on issues stuck in the ministries.