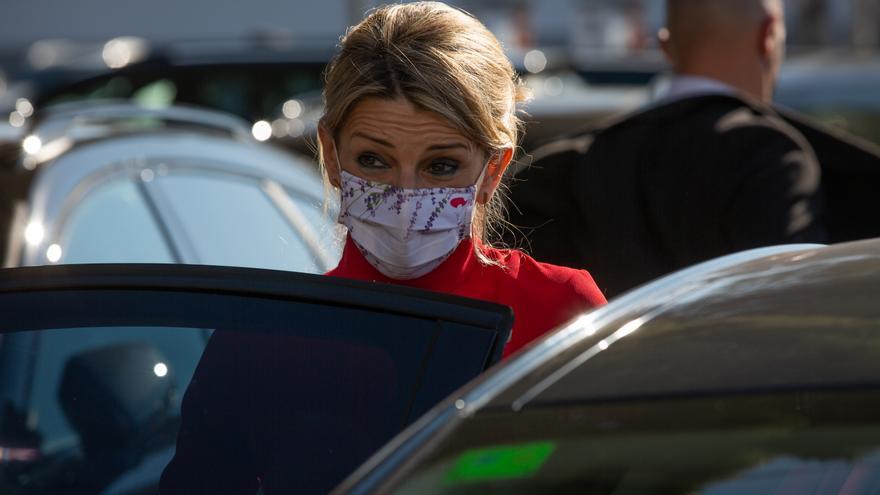 Gabriel Rufian launched a challenge to Yolanda Díaz on January 19 at a press conference in Congress to discuss the labor reform decree that Congress will vote on next week: "This reform is a make-up." On a personal level, the ERC spokesman had a message for the Vice President of the Government: "Republican Esquerra does not negotiate or vote for personal projects, and I say this with respect for the figure of Yolanda Díaz." He sounded a little contemptuous, albeit with respect.

All the decrees and bills that the Government transfers to Parliament are personal insofar as they come from a Ministry directed by someone. He seemed to say that he was not impressed at all by what Díaz is at stake in this stake in the face of his future candidacy as head of United We Can. And it is true that a lot is played, practically everything.

Diaz has picked up the gauntlet. It has not been limited to starting a negotiation with the nationalist partners of the coalition government, who add up to 21 deputies. He has also traveled to Barcelona with the intention of putting pressure on the Government and receiving support for the reform from the CCOO and UGT, which are strong in the Catalan industry. He wants to turn the game of expectations on its head. It is not only she who risks a lot. Those who oppose the reform will have to give explanations for opposing the improvements it means for workers, he warned. Here it rains for everyone and everyone can get soaked.

Dialogue with skeptical parties is not doomed to failure, but its chances of success depend entirely on the definition of 'success'. Moncloa has vetoed any change in the reform agreed with the unions and employers. That leaves these parliamentary groups with the uneasy feeling that they are only needed to push the button. Parliament has nothing to say about it, because the negotiation has been outsourced to the Government and the social partners.

Diaz's offer that some elements that are outside of this reform be postponed to a later dialogue is received with disdain by the interlocutors. "Our humble experience of negotiating with these people (he was referring to the PSOE and United We Can) is that what you don't negotiate now, forget it," said Rufián.

To begin with, Díaz is not arguing that this is the only possible reform or that it is a minor, albeit significant, change. No embarrassing defenses. The Minister of Labor considers it a milestone in the fight against job insecurity, something that had never been done before. In a conference on Wednesday at the CCOO headquarters in Barcelona, ​​he said that those who reject it or say that it is "light" only show "a profound ignorance." They ignore that the supremacy of sectoral agreements is going to lead to wage increases for many workers – on this, he said that "the change is brutal" – and that many temporary contracts allowed until now will have to become indefinite.

In his defense of the reinforcement of the agreements in this reform, he has the full support of the big unions, which is logical. The end of the ultraactivity of the agreements (the automatic extension of the collective agreements while a new one is negotiated) had been one of the great gifts of the Government of Mariano Rajoy to the companies. Unions such as ELA or LAB in the Basque Country also want regional agreements to have precedence over national ones, and both the PNV and EH Bildu support them. In many negotiations in their autonomous community, it is what they have already achieved in the past at the negotiating table or with pressure on the street.

The first day of Díaz's visit to Catalonia made the reluctant partners decide that they had to give a common answer. They made it with a joint appearance on Thursday at the Congress of parliamentarians from ERC, EH Bildu, CUP and BNG with a statement that does not close the doors to continue negotiating, but with a high and appraised price: seven measures among which are the prevalence of provincial and regional agreements, the administrative authorization of collective dismissals through an ERE, and the recovery of compensation for unfair dismissal of 45 days.

Yolanda Díaz already had an answer for this point and he told it in an interview in Hora 25 on Wednesday night. Since the labor reform of 2012, much has been said about reducing this compensation. It was interpreted that its amount was a dissuasive factor for layoffs, something that had not been confirmed in successive crises that ended with an immense destruction of employment. Undoubtedly, reducing it benefited the companies.

The vice president explained that the agreed changes have been made with those who suffer from precariousness in mind. "What this rule does is give protection to hundreds of thousands of temporary workers who barely had severance pay," he said in the interview. He admitted that compensation for permanent workers is an issue that United We Can unsuccessfully tried to include in the investiture agreement with the PSOE.

On top of that, he raised a discrepancy in concept with those who brand the labor reform as a failure for not having included the issue of severance pay: "The problem in our country is not dismissal. It is precariousness."

Díaz boasts that he never abandons a negotiation and that he will continue trying until the end to get the affirmative vote of those four critical parties. His hands are tied by Moncloa's decision not to touch the text that received the support of the CEOE. That allows Esquerra to criticize an approach that denies them the possibility of introducing changes. "How can you negotiate when very important people in the government say that you can't touch a comma and that you don't want to process it as a bill," said Jordi Salvador, the deputy negotiating on behalf of ERC.

Without the support of those 21 deputies, the Government can only aspire to have the support of Citizens and small parties and see if it reaches 175 seats by the hair, although for that it would need the abstention of the PNV, which is not guaranteed. That would give a propaganda trump card to those opposed to the reform that will harm Díaz and United We Can, which is sure to be used in the next elections. They will say that the PSOE and UP have only been able to approve the reform that satisfies Ciudadanos.

"The entry of Ciudadanos (in support of the reform) expels left-wing formations," said Díaz. As with the chicken and the egg, we will have to ask ourselves what came before, the 'yes' of Ciudadanos or the 'no' of those four games. In the answer to the question will be knowing who loses in this rupture of the majority that made the formation of the Government possible. Workers should also be included, because in case of failure of the decree law it will be very difficult for there to be another labor reform in this legislature. That won't bother the CEOE at all.