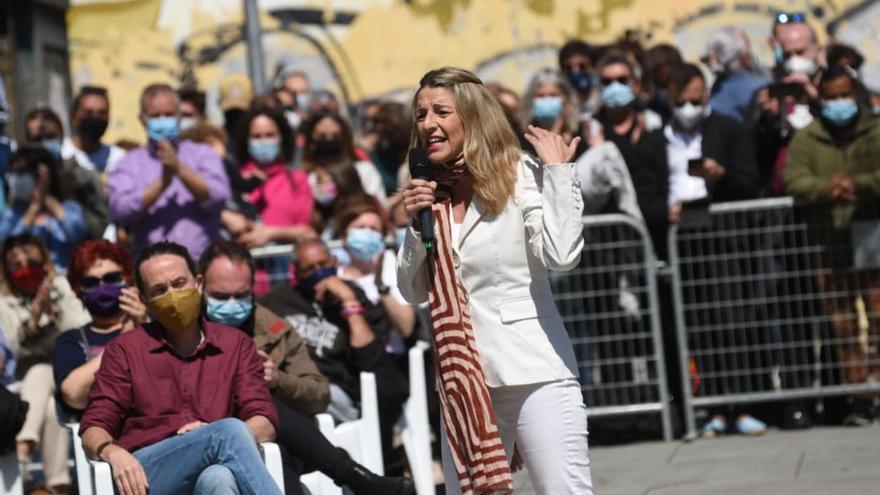 The Second Vice President of the Government and Minister of Labor, Yolanda Díaz, has intervened this Sunday in the act that closes the festivities that commemorate the centenary of the PCE, praising the work carried out by the central government during the management of the pandemic and anticipating the political future of the left-wing coalition.

“Come on, I am going to raise a project in your favor, a project that is already underway, that is here, in every corner of our country. They are not waiting ”, highlighted the Minister of Labor, who also detailed that it is“ an urgent task to raise a country project in favor of the people ”. Díaz argues that this is the way to “corner hatred.”

Likewise, he has been impassive about the future of the labor reform. “Believe me, we are going to repeal the labor reform,” he pointed out. “If we don’t, the country, the Government and Spain will be wrong.”

The minister has participated in the closing ceremony of the centenary of the PCE festivities that has been held in the Madrid municipality of Rivas Vaciamadrid. Along with Díaz, the union leaders of the UGT and CCOO, Pepe Álvarez and Unai Sordo, have also taken the floor; and the secretary of the communist party, Enrique Santiago.

Participants’ interventions have emphasized the presence of “social dialogue” as a measure to face the economic consequences of the pandemic. “After so many years of neoliberal dictatorship, today the State is more necessary to address the future challenges that citizens have,” Álvarez pointed out.

For his part, Sordo has made a tour about the presence of the centennial formation in our country. “The PCE was on the right side of history, something that not everyone can say,” he stressed. Likewise, he has defended that there is currently a time of “historical revisionism” that seeks to “whitewash” the 40 years of dictatorship and “undervalue” the work of the training led by Santiago “for the recovery of rights, freedoms and democracy in Spain. ”.

“That they do not sell us democracy and the transition as an elite pact, it was pushed from the street”, has influenced the applause of the ten thousand attendees, recalling the work of Atocha’s lawyers, among other figures linked to the political formation.