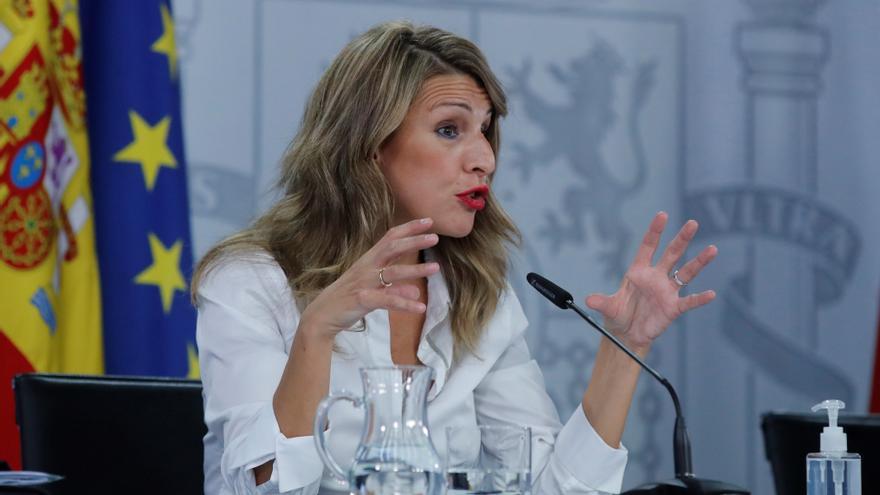 The Government is inclined to raise the minimum interprofessional wage this 2021. This was revealed this Friday by Minister Yolanda Díaz, who did not want to specify a specific figure for the increase in the SMI until hearing the proposals of the unions and employers at the negotiation called on the matter next week. In 2020, the minimum wage is located at 950 euros per month. “Of course, we do not share the freeze,” the minister said in TVE’s ‘La cosas clara’, a measure demanded by businessmen, as reiterated yesterday by the leader of the CEOE, Antonio Garamendi.

Minister Díaz thus confirms that the Executive’s position on the evolution of the SMI advocates the rise, after the Ministry of Labor and the Government spokesperson had been quite cautious on this issue until now, with the premise that we had to wait to find out the positions of the social agents at the dialogue table.

The majority unions, CCOO and UGT, have already publicly demanded the Executive to raise the minimum wage. The leader of CCOO, Unai Sordo, stated this week that the union “would not accept” a freeze of the indicator that marks the lowest salary of salaried people in Spain and the general secretary of UGT, Pepe Álvarez, opted to increase it to the “environment of 1,000 euros “this 2021.

For its part, the CEOE employers have also expressed their position, which advocates the freezing of the SMI this year marked by the coronavirus crisis. “We think that this is not the time to talk about these issues,” Antonio Garamendi said yesterday. The president of the employer’s association highlighted “the one that is falling” for many companies, especially many of the hotel and commercial industries, “which are those affected by the minimum wage.”

Look at the past, pensions and Europe

The Labor Minister has argued her rejection of the SMI freeze for various reasons. Among them, he has especially highlighted three. The first involves a look at the past. Yolanda Díaz recalled that “in the entire history of democracy” the interprofessional minimum wage has never been frozen except on two occasions, during the term of Mariano Rajoy, which the minister has framed in a policy of “cuts and austerity” that it is not the one defended by the coalition government. It is true that, if you take a look at the evolution of the SMI in democracy, it had never increased as much as in 2019, when it rose by 22.3% after an agreement between PSOE and United We Can.

Second, Díaz has called to look at what the countries in our European environment are doing and stressed that “everyone” is agreeing to increases in their minimum wages for next year. The Ministry of Labor explains to this medium that there are numerous examples, such as the case of France, which foresees an increase “close to 1%”, of Germany, of “2.7%” and of Holland, of “1, 9% “, among others.

And, finally, the minister has also argued that “nobody would understand” that the SMI was frozen when the Government has agreed to revalue pensions by 0.9% in 2021, according to the inflation forecast for next year, and has approved the same rise for the salary of public employees. “No one would understand, in the income policy that we are carrying out and in a progressive government, that we would not do the same with the workers who need it most, to accompany them at least on a path that allows not to lose purchasing power,” he said. Yolanda Diaz.

“I am not going to give an amount because I owe it to the social dialogue table. Like everything else, we will discuss it and hopefully we have an agreement,” said the person in charge of Labor, so as not to reveal the increase figure that the Government is studying.