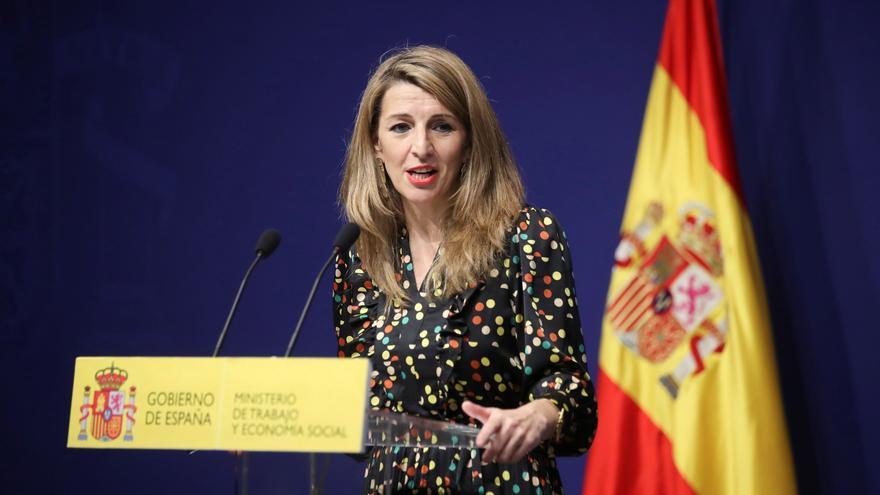 “I anticipate that we are in the process of ratifying ILO Convention 189”. With these words, the Third Vice President of the Government and Minister of Labor, Yolanda Díaz, announced on Tuesday the start of the ratification process in Spain of this important international agreement that equates the rights of domestic workers with those of all workers. Its compliance means ending the exclusion of these employees from unemployment, a historical claim of the movements of women workers, which they mobilized just a few days ago for this reason.

The Ministry of Labor had already communicated its intention to ratify Convention 189 of the ILO (International Labor Organization), but for the moment it has not given deadlines in this regard. Yolanda Díaz has responded this afternoon to a question in the Senate from a representative of Esquerra Republicana, Ana María Surra, in which she has advanced that the Government has already officially begun the ratification process with the “process of compiling all the reports.” by your Ministry.

Afterwards, the reports “will go to the competent Ministry of Foreign Affairs,” the vice president said. “We are going to proceed with the eradication of this injustice,” Yolanda Díaz stressed.

The Minister of Labor has warned in her response that a Vigo court has raised a question to the European justice about this lack of social protection and, “on March 3, the European Commission has said something important: not to give social protection, fundamentally the unemployment, this group of workers violates Directive 79/7 “. Díaz has covered this criterion before the “debate” that Spain is going to undertake shortly.

On March 30, Domestic Workers’ Day, several groups of workers once again demanded from the Government, and specifically from Yolanda Díaz, the recognition at last of access to unemployment protection. Household employment, which employs some 600,000 people, the vast majority women, It is the only one in our country that does not generate the right to any unemployment benefit and the only one in which you can be fired without alleging any cause, among other peculiarities that make this profession one of the most precarious.

An agreement for the equalization of rights

The demand for the unemployment of domestic workers has traditionally been articulated within the movement in favor of the ratification of ILO Convention 189, which more broadly equates the rights of this group of employees with all workers. For example, in Spain domestic workers demand that they be included in the General Social Security Scheme, a promise that this coalition government and other precedents have delayed. At present, these female employees are included in a Special Regime in which their contributions to Social Security are covered, but also the social protection to which they are entitled, such as retirement pensions.

“Although it has taken a year, we have been in a pandemic,” Yolanda Díaz recalled about the ratification of this agreement. The vice president recalled that the Ministry of Labor has also transposed other directives, such as exposure to carcinogens, “and for the first time we have granted an unemployment benefit to domestic workers.”

The vice president recalled this temporary allowance (three months) linked to the crisis due to the pandemic, which has already expired, as well as the specific campaign of the Labor Inspectorate to guarantee that domestic employees do not earn wages below the SMI. Only in the first stage of the campaign, of an “informative” nature to households where alleged irregularities were detected, six million euros in unpaid wages have surfaced for female workers.

“Nothing can be built on precariousness,” stressed Yolanda Díaz. The domestic workers demanded just a few days ago to the vice president not only that the Government comply with this ratification, but that it do so as quickly as possible, since the situation of the workers has worsened a lot with the crisis of the pandemic. “The impact has been brutal. We have companions on the street, asking at food banks, because they are not really giving us solutions,” warned Rafaela Pimentel, a domestic worker from the Territorio Doméstico association.

Sustainability, demand and opportunity for Spain

John Müller: All against Madrid