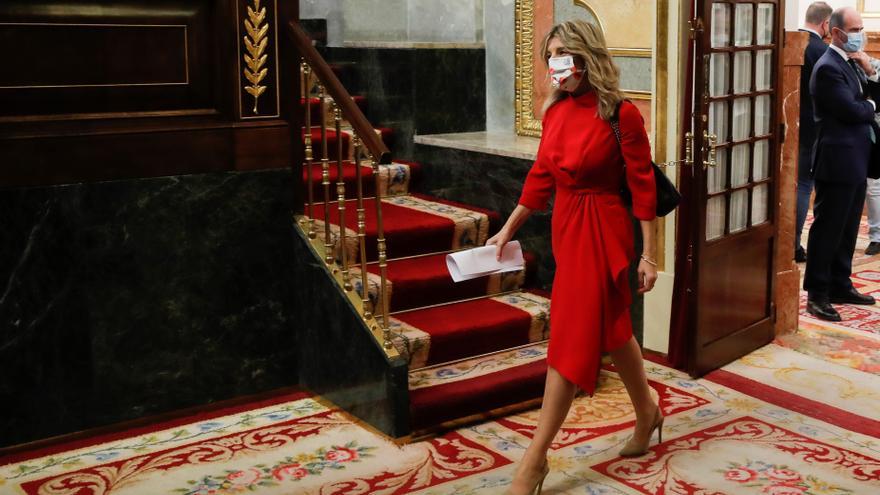 It is in the manuals and it is in political practice. To build a leader in times of disaffection, one needs, among other qualities, to have passion, optimism, humility, some accredited management, resistance, discipline, the ability to shape consensus and know how to listen. And there is a part of the left to the left of the PSOE that is sure that the second vice president, Yolanda Díaz, has them all. A social leadership, without a party and without a clear project yet, but with which he has proposed to weave his particular 'I have a dream' (I have a dream) in the style of Martin Luther King.

Bridge all the gaps, swap blacks for workers and still find some similarity between the champion of the defense of civil rights of African Americans and the fight against poverty and the Minister of Labor. Perhaps in their fight against non-discrimination. Or perhaps in "the narrative bombast", his detractors ironically.

Yolanda Díaz, her supporters say, has been willing to have eyes when others had lost them, gives "peace and love" in a framework of tension and hatred and wants "to change people's lives." And that is what has allowed her to be perceived as the maker of a historic agreement and a supposed paradigm shift in labor relations for which he has thanked "thank you, thank you, thank you" to the Government, social agents and even journalists.

The bombast with which it has managed to sell the labor reform has perplexed locals and strangers because it has neither reached where it was intended nor has it ended with the most damaging parts of the rule approved by the right in 2012. In fact, if it had been led by the PSOE, a part of the Spanish left would be safe today demonstrating in the streets because it neither recovers the costs of the dismissal nor does it suppress the power of employers to substantially modify the working conditions of the worker. It is recognized by the unions, certified by employers and shared by a good part of the Government, where they admit that the pact undoubtedly has much more political value than labor, despite the undeniable advances to end precariousness.

The fact is that Díaz, to whom many already attribute a "own brand" within the Government and every day further away from that of United We Can, feels in each intervention proud of his country, of the unions, of businessmen, of journalism and of people in general, to whom he always emphasizes that he speaks from "love and affection."

"This reform [dijo el día de su aprobación en Consejo de Ministros] turns the page to precariousness in Spain. The fundamental thing is that it is a norm that brings the recovery of rights in the face of cuts, to the norms that caused so much pain. This agreement will improve the lives of the workers of this country (...). After more than 42 years and 52 labor reforms, I dare say that there are women and young people who have never known a contract that was not garbage in their lives. This country never loves itself. I'm going to try to make us love each other a little more ”.

Who is going to reject exquisite forms in a scenario like that of the public sphere where insults, disrespect and outbursts are constant? Díaz is empathetic, the government's highest valued minister, cultivates media relations like no one else, squanders good roll and aspires to light a new non-party project in multiparty Spain. It works for the construction of a transversal, progressive, feminist and environmental platform of which there are not yet too many details, beyond It is supported by Ada Colau, Mónica Oltra and Mónica García, and that rejects noise, egos and organic structures.

The official slogan in La Moncloa, for the moment, is not to enter the rag and value its governmental work, although sometimes it clashes with other ministers and has maintained bitter controversies in which it has shown its most acid face, the one that does not correspond with his public image. A different matter is that the paternity of government initiatives and collective successes such as the labor reform or the SMI rise and that the socialists are going to remain silent.

In fact, the answer that Pedro Sánchez gave to journalists in his balance of the year when they asked him if he was concerned about the popularity and prominence of Díaz was a serious warning to the Vice President of Labor, according to different government sources. "All I can say is that I am delighted with the work you are doing," he said with the best of his smiles. But ... There is always a but when a socialist speaks of the minister: "I have always said that when ministers are appointed, we are already ministers of the Government of Spain, not of a political party." A good listener ...

The president does not want dissonances in the Executive in the style of which day in and day out were also fought in the media when the vice-presidency was held by Pablo Iglesias, but he will not allow the most popular minister of the Government to be her own entity or work from inside for your personal promotion. And this is what several ministers of the PSOE, but also United We can, accuse her of, where relations with Irene Montero are non-existent, with Ione Belarra, only formal and with the rest of the political heirs of 15-M, every day more distant.

The prevention of Sánchez with Díaz that they already speak unambiguously in the Executive has not been the result of the battle that his possible electoral rival has fought with Calviño during the negotiation of the labor reform, but they began long ago, when he discovered that “ to each one he says what he wants to hear ”and“ that sometimes he did not tell the whole truth about the negotiations with unions and employers ”. This is how a socialist from the Sanhedrin of Sánchez tells it, who also affirms that the former chief of staff of the Presidency, the now repudiated Iván Redondo, "advises the vice president, via Pablo Iglesias."

They also did not see with good eyes that he sold his meeting in the Vatican with Pope Francis as a private audience and yet he will move to Rome with his entourage in the Falcon. For some time in La Moncloa they have observed that Díaz uses his government agenda as an excuse to hold promotional events for his campaign in the afternoon in all the autonomous regions. Something that does not like in La Moncloa, and much less in the PSOE, where jokes and nicknames to the Minister of Labor have become a constant.

Nobody is aware that if the broad front to which it aspires takes hold, it will be an electoral rival in the face of which socialism will have a complex dilemma between the need for Díaz to obtain a good result that allows them to continue in the Government and avoid, at the same time, shrink your own electoral space. In the PSOE there are those who suspect that the minister could suspect a gradual distancing from the government action to end up leaving the Council of Ministers when there are a few months left for the generals, as the last blow before announcing her candidacy for the Presidency of the Government. They are the least because the majority of the socialist feeling believes that it will need until the last day "to use the institutional platform, which is the one that gives it focus, content and the structure that it lacks as it does not have its own party." In any case, it is an option not to be ruled out because it would also mean, given its popularity, a torpedo on the waterline of socialism.

At the moment, the immediate presidential concern is in that the parliamentary partners validate the reform with their affirmative vote before January 31 that left the Council of Ministers without any modification. The Sánchez's call to responsibility and the invocation of “common sense for the legislative power to respect the agreement with the social agents, something that has not occurred for 10 years "has not been a good start for the negotiation with the parliamentary groups. Once again the stable allies complain that the Government is acting as if it had an absolute majority and not 155 seats and with a false conviction that its usual partners will not let the government left fall to leave the way clear to a right twinned with Vox. Basically, the reason for the definitive support, such as It has been to achieve the agreement with the CEOE, it is called 140,000 million, which are those that are at stake in European funds and are so necessary for the economic recovery and the future of thousands of companies.

In any case, Díaz will continue with his particular 'I have a dream', Luther King's most famous speech in defense of a harmonious coexistence between equals, of "a beautiful dawn that ends with a long night of captivity" and of "a day in which the valleys are summits ”.