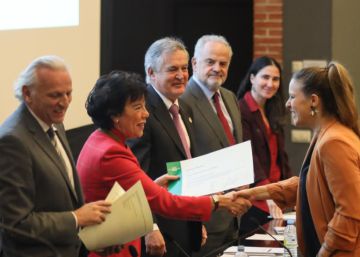 Language and ethics are the main cement that must unite all the elements of good journalism. Of the two, the Cuban journalist Yoani Sánchez affirms that the second is more difficult to achieve because it is born from personal commitment to objectivity and truth. "Ethics in the press begins by being honored in the management of the informative raw material, conscientious in the verification of data and attached to the reality of what we are telling," said the founder of the digital newspaper on Tuesday. 14ymedia during the award ceremony of the 32nd promotion of the master's degree in the UAM-EL PAÍS School of Journalism, and the inauguration of the 34th course, which was attended by the Minister of Education, Isabel Celaá. The 33rd promotion currently develops practices in different media of the PRISA Group.

Journalism knocked on Sanchez's door and had no way to block his way. With the launch of the Generation Y blog in 2007, his life took a turn. These were the times when the trade seemed to have lost the compass, driven by digital technologies and social networks. "Many bet that the new journalism would have to be faster and more immediate, with greater integration of audiovisual elements, more interactive and democratic," said the journalist to remember that in the middle of the technological maze the central point of any work was underestimated Informative: the story. "In the end we are storytellers. Our field is not fiction, as in the case of novelists, because we tell real stories, which happened a few minutes or several decades ago."

Facing a task with these characteristics in a country like Cuba was not easy. The journalist recalled that in authoritarian societies information is still seen as treason and in that environment the press has only two positions: applaud power or be condemned to exist in illegality and harassment. For Sánchez, information ethics does not yield to pressures or self-censorship. "In regimes allergic to information freedom, the reporter becomes a truth activist," said the journalist, who has found that there is no more effective factory to fake news and post-truth that populism, or laboratory from which more elaborate bulls come out than from an authoritarian regime. "Hence the exercise of ethical and quality journalism is of vital importance in the current times," he said before stating that the job of informing is now "in the spotlight of too many powers."

Sanchez has lamented that in countries like Honduras or Mexico a report can cost the life of its author, while in States like Cuba "the ruling party swears that journalists do not kill on the island, although the truth is that they have killed us journalism by force of threats, arbitrary arrests, confiscations of work supplies and pressures to go into exile. "

He Director of the UAM-EL PAÍS School of Journalism, Álex Grijelmo, Sanchez has been referred to as a "fighter for freedom of information" and stressed that despite the pressures and inconveniences, the Cuban journalist decided to stay on the island, exercise journalism there and "have the courage not to conform." Grijelmo has said that violating the laws of journalism is the opposite of journalism, has claimed professionals responsibility, social commitment and ethical sense and has maintained that respect for professional ethics makes journalists reliable. "A journalist can reach the highest intellectual and human height, but also fall into the greatest weaknesses. In those shameful cases we can defend ourselves well, and proclaim that the latter is not journalism."

The Minister of Education He has reflected on the relations between the media and politicians and their role in a democracy. After assuring that it is a mistake to make politics according to the media, he has argued that there must be a "healthy distrust" between the press and politics. For Celaá, press freedom is the true democratic nature of a country. "Politicians and journalists work for the same people: citizens" and "democracy and citizens need quality journalism," he stressed.

Celaá has insisted that politics and the press have "different rules of the game. Different rhythms, and although they need each other, they should not be identified. They should not be confused. And yet, sometimes -the worst-, they can overlap. They do so when a politician confuses his project with a sum of actions adapted to the short term of a press in need of daily impact measures. Or when a media outlet accritically serves the interests of a part of the social body ".

The academic act was attended by the honorary president of the PRISA Group, Ignacio Polanco, and the rector of the Autonomous University of Madrid, Rafael Garesse, who has highlighted the great capacity of both teachers and journalists to influence society. Especially, at a time when the scientific and technological revolution is marking the future.

During their more than three decades of life, 1,255 students have graduated from the UAM-EL PAÍS School of Journalism. Grijelmo explained that some of them direct the media, are in charge of information services, work in radio stations, television networks and printed or digital newspapers throughout the Hispanic area. The academic institution has the strong support of the Autonomous University of Madrid and the PRISA Group, editor of EL PAÍS, and with the help of Bankia, the BBVA Foundation, the Carolina Foundation and Iberia.