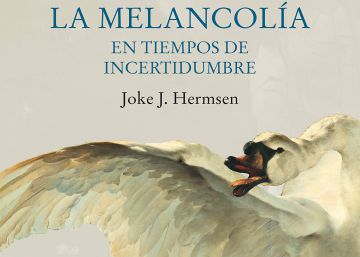 Dutch philosopher and novelist Joke Johannetta Hermsen (Middenmeer, 1961) presents an idealistic and well-meaning essay that proposes a generalized critique of current societies in the West. At the beginning, it seems that the work will focus only on the study of the concept of melancholy in its many nuances and paradoxes, which will rediscover it for the current reader with original views, however, the author has broader views. It is true that the first pages describe the phenomenon of melancholy, of which we all know that it is that “bittersweet sadness” that often numbs the body and gives wings to the imagination; that emotional state whose causes are motives as diffuse as the desire to be in a place other than the one we occupy, the longing for the past, the memory of childhood, of parents and siblings, when we lose them; or the fear of death; or that it is simply due to a sadness of mind for no reason to clarify it. It is also true that the author makes a brief historical review of how melancholy was understood from antiquity to the present day. In the Middle Ages they considered it “diabolical temptation” that prevented monks from being firm in their faith in God. In the Renaissance and Romanticism it was believed that it was the mark of wise men; All geniuses had some melancholy. They overcame their nostalgia, sadness or dejection creating works of art. At present – and this is the repeated thesis of the essay – melancholy loses its genuine denomination and is transmuted into mere “depression.” Depression is fought with drugs, not usually “creative” and, according to Hermsen, it is the common feature of countless people who live and suffer in our “capitalist” and “consumerist” society. The symptoms are similar to those suffered by the melancholic, but in the key to tragedy: add in apathy, despair and block the individual. It is caused by social circumstances that surpass us: the demands of work and lack of leisure; or the fear of losing what we have to the threat of terrorism or because of foreign immigrants; and it is also caused by the cerril nationalism. As a specialist in Lou Salomé (the muse of Nietzsche and lady of psychoanalysis) and Hannah Arendt (the great Jewish and German political scientist), Hermsen draws on some of the theories of both women – in the personal sphere of self and in the context of polis— which effective guides to overcome depression in the modern world. With this, the supposed essay on melancholy ends up transformed into a utopian vision of how society should be in which healthy and creative citizens are responsible in the common enterprise of becoming more human. Hermsen advocates a plural society in which cosmopolitanism, thought, art and “hope” in a better future (the concept is taken from the philosopher Ernst Bloch, who also comments) are values ​​that prevail in our environment. If we succeed, the fears that lead to xenophobia will disappear; well, leaders like the Dutch Geert Wilders or “Santiago Abascal in Spain” would have no arguments To access the power. Overcoming depression is thus a social challenge; we must learn from suffering to suffer less, and open ourselves to hope. Laudable ideas are those of this book, but they may leave the old-fashioned melancholy cold.