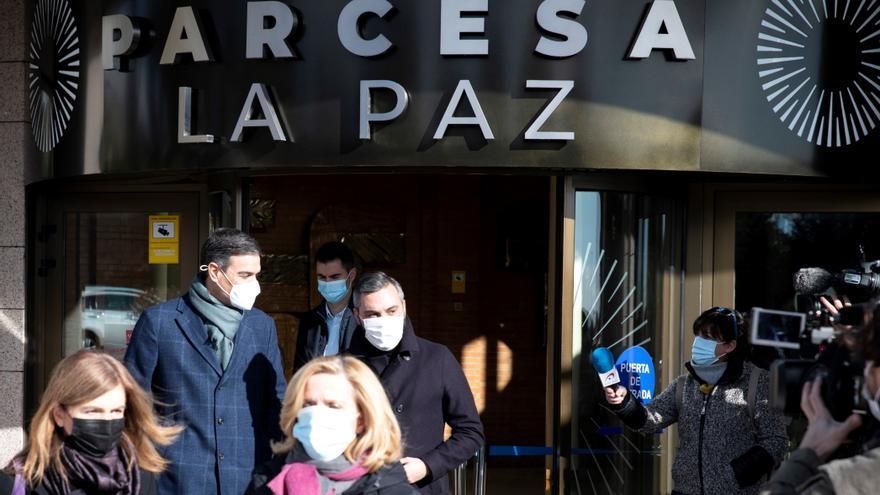 The world of culture and politics has fired Almudena Grandes, who died this Saturday. The novelist will be remembered as "the writer of memory", who "gave voice to the forgotten and the humble" and who made Spain a "better country": "Yesterday stones rained on Spanish literature." Those have been some of the comments of actors, writers, directors and politicians who this Sunday have attended the La Paz Funeral Parlor (Alcobendas), where the remains of the writer are veiled, to accompany family and friends in the last goodbye to a one of the most relevant figures in Spanish literature in recent decades, the one who "as a writer of memory, will remain in time."

A woman "clearly committed to speaking, to our collective memory and to her country because from her dimension and intellectual contribution she has made our country a better country," said the President of the Government, Pedro Sánchez, one of the first to attend. to "pay tribute" to Almudena Grandes, who died this Saturday at her home in Madrid as a result of cancer that was detected in September last year.

The Executive has also attended the Minister of Culture, Miquel Iceta, who highlighted his "taste for history, the recovery of memory, his incredible writing quality and his feminist and left-wing character"; and that of the Presidency, Félix Bolaños, for whom Almudena Grandes "gave a voice to the forgotten and made us recover their memory and history." Also the Minister of Social Rights and Agenda 2030 and Secretary General of Podemos, Ione Belarra, who has indicated that the gratitude to the writer Almudena Grandes "is infinite."

That memory has incardinated the discourse of friends, colleagues and representatives of the institutions of culture and politics, to the point that the former president of the Government Jose Luis Rodriguez Zapatero has defined her as "the writer of the memory of memory: we it taught the consolation that is in the memory and the search for a lost justice that is in the memory ".

But the vast majority have also praised her commitment "to the most vulnerable and forgotten", "to the defeated", a woman who, in the words of the Ombudsman, Ángel Gabilondo, "has given voice to the supposedly insignificant, who are people who they are history with a lot of meaning for our country, what she calls 'the survivors' and that it seems that sometimes we forget ".

Many of those who have come here had her as the reference writer of their generation, as the president of Congress, Meritxell Batet, has emphasized, that is why they have lamented her death at 61, "too young". But praise for Grandes has extended to his overt commitment to women. She, a fighter committed to feminism, was "a great public voice for many women," as former Vice President of the Government Carmen Calvo has recalled.

All have given an account of their intellectual, social and political stature, highlighting the mourning that since this Saturday dresses the Spanish narrative for the "irreparable loss" left by Almudena Grandes.

The president of the Film Academy, Mariano Barroso, has underlined "joy" and "dignity" as notes on the life and work of the writer. "We are going to remember Almudena happily, as she taught us. She has taught us to remember, she has taught us the importance of memory and thus we will always remember her, and as she wanted: happy."

Nobody like the writer and journalist Juan Cruz has graphically described the impact of his death in Spain: "It is as if stones had rained yesterday on the recent history of literature," he reflected.

Those most visibly affected have been the closest. Her group of friends from Madrid and Cádiz - she had a house in Rota, where she was considered one more neighbor - who have avoided making statements, such as the singers Ana Belén and Víctor Manuel.

Neither did the film directors Montxo Armendariz and Fernando Leon de Aranoa. Others, such as Greater Wyoming and Joaquín Sabina have spent hours with the family and in particular with the writer Luis García Montero, her husband.

Scarves from Atlético de Madrid, the club of his loves, have been seen in the funeral home, which has precisely posted a photo on social networks of Almudena Grandes with the team's shirt. Tribute that the city of Madrid also hopes to make to her if the request that the spokesperson of the mixed group in the City Council and member of Recupera Madrid, Marta Higueras, has announced, to present an urgent motion in the next municipal plenary session to be named daughter favorite of Madrid and has, in addition, a street, square or library in his honor.

Other personalities who have come to say goodbye have been the State Attorney General, Dolores Delgado, accompanied by her partner, Judge Baltasar Garzón; the general secretary of Workers' Commissions, Unai Sordo; and Father Angel, who said: "people leave us, but their goodness always remains." Like Almudena.