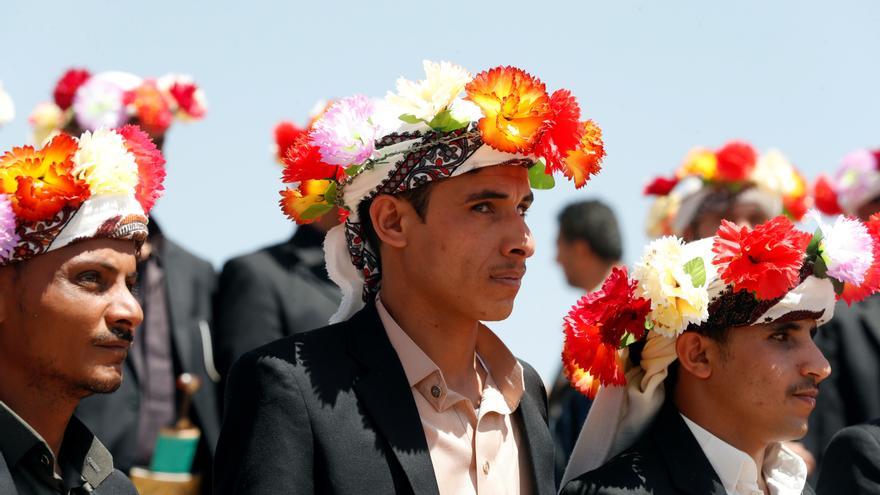 Sana’a, Mar 10 (EFE) .- Hundreds of guests dance to the beat of drums and wave traditional Yemeni daggers in the air, while a handful of curious neighbors closely watch a special event held once a year in Sana’a. since 2017: the mass wedding of visually impaired men.

The 40 bride and groom, with different types of visual impairment, enjoy the hearing spectacle from a chair, dressed in garlands of flowers on their heads and a traditional white tunic, which can be seen under a black jacket tied with a golden belt from which it hangs. the traditional dagger.

Despite being a wedding dedicated to blind Yemeni men, the ceremony is no different from a wedding party in the Yemeni capital, where more than five years of war have failed to end the celebrations.

Women, for their part, do not suffer from any type of disability and celebrate the union in a place separated from their future husbands, as tradition indicates based on the strict Islamic regulations that govern the country.

“May Allah make you happy forever!” A town crier shouts enthusiastically through loudspeakers, above the cheers of the bride and groom.

The venue is illuminated with white lights and fireworks fill the sky, while curious neighbors, from their balconies or windows, watch the show attentively.

Today is the big day for 26-year-old Hamdan Mansur Zuail, who can finally marry after family issues have prevented it in recent years, as he explains to Efe: “I’ve been waiting for the wedding for more than three years,” he says while a hairdresser finishes her headdress for this occasion.

“I could not describe how delighted I am. I even feel that I am the happiest person,” says the blind young man.

Despite no official data on blind people in Yemen, Zuail is one of 4.5 million Yemenis with some form of disability, according to 2019 World Health Organization estimates.

Exclusive weddings for the blind have been held every year in Sana’a since 2017, with around fifty couples to reduce the costs of the event in this way, the spokesman for the Yemeni Society of the Blind, Jamil al Hemiary, explains to Efe.

The celebrations take place only in the capital, so the lucky ones have to travel from other parts of the country: this year they come from 13 different provinces.

According to Al Hemiary, around a thousand people are registered with his association, which has offices in seven different provinces of Yemen to provide coverage for the visually impaired.

On this occasion, the association offers each groom a dowry of about 500,000 Yemeni rials (about $ 830), an amount that is also financed by private entrepreneurs and independent organizations.

That figure represents a great help for people with disabilities in Yemen, a country that is the scene of the largest humanitarian catastrophe on the planet, with 80% of its population in need of some type of humanitarian aid, according to the UN.

The devastating effects of war are being felt even more on people with some type of disability, since they have much more difficulty fleeing violence and accessing health and humanitarian services in the country.