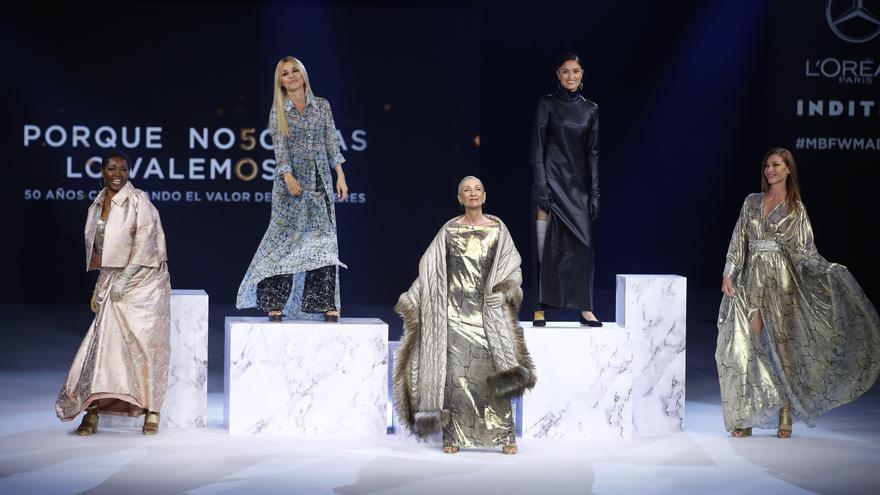 Madrid, Apr 10 (EFE) .- The apprentice of the latest edition of the “Masters of Sewing” program, Yelimar Moreno, has paraded this Saturday at the Mercedes-Benz Fashion Week Madrid (MBFWMadrid), with one of Angel’s creations Schlesser, who opened the third day of the Madrid catwalk.

Before wanting to dedicate herself to sewing, Yelimar Moreno (Caracas, 1989) combined her advertising studies with her work as a model, a career that was cut short when she lost her right leg due to a traffic accident when she tried to escape with her husband. of an attempted kidnapping. Some time later he moved to Spain and, for three years, has lived in Barcelona.

“I am extremely excited and wanting to step on a catwalk again,” the model told Efe during the hair and makeup session prior to the parade, the first to be done in Spain.

Yelimar and Juan Carlos Mesa, creative director of Angel Schlesser, met during the recording of the program “Maestros de la Costura”, when the contestants attended the firm’s workshop, at which point the creator was struck by their beauty and personality.

“The program has only given me good things like this. It is very special for me to be here”, in a parade in which Juan Carlos Mesa, creative director of Angel Schlesser, has opted to show the diversity and inclusion of women, whatever your condition, age or style.

With her long hair gathered in a ponytail decorated with golden thread, Yelimar has paraded wearing an evening dress, black with faux fur and French sleeves, which she complemented with elegant gloves, from the autumn-winter 2021 collection.

“I am happy to be part of a parade like this. I defend diversity. If we were all the same it would be very boring,” said Yelimar, who assures that during the program she has felt “very loved by the Spanish people”, who has seen in it a “representation” of Venezuela, his country of origin.

“They have opened the doors of his heart to me,” she said excitedly, remembering the messages of affection she received through social networks.

Her love of sewing comes from her mother, a dressmaker, and, although she could not study fashion design due to financial problems, sewing was one of her therapies after the accident.

From “Masters of Sewing” he only saves “good moments”. “I left with a good taste in my mouth” and he acknowledges that he had a “special connection” with Lorenzo Caprile, his words in the last program “are a memory that I will carry with me for life. It was a magical day. (Photo)