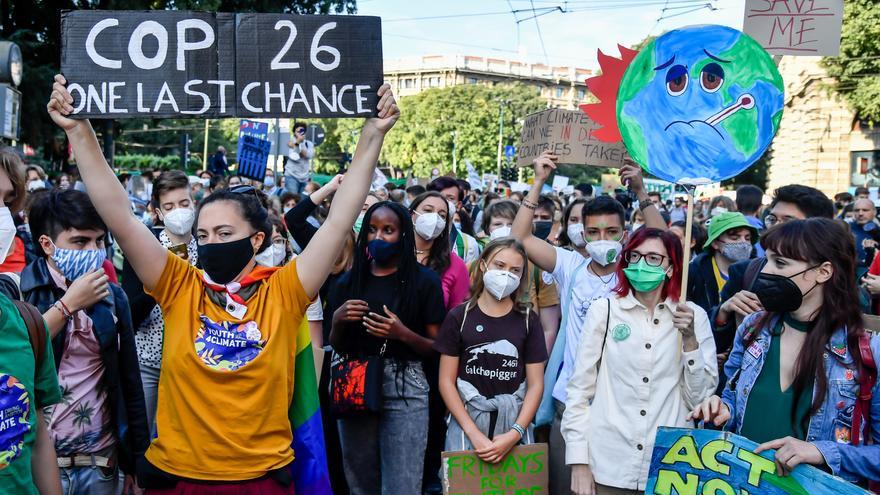 “It is important that our voice is heard because the future is ours.” This is how Diana Pineda, a young Mexican climate activist, summed up her feelings at the Glasgow Climate Summit on Thursday. Pineda has participated in a forum for Latin American and Caribbean youth that tries to show that they have not fallen into inaction and can go from protesting to proposing to tackle the climate crisis.

The attitude of Pineda and his colleagues tries to break a growing feeling that disaffection or hopelessness has been installed in the fight against climate change. Especially in the younger generations, who came out in crowds to show their disappointment in the wake of the strike started by Greta Thunberg in 2018. COP25, the one held in Madrid, was the Youth Climate Summit in a year marked by demonstrations mass events and an unprecedented mobilization until the arrival of the pandemic.

Today, the youth movement for the climate continues to gain muscle, but skepticism and disaffection have permeated its discourse in the face of the climate cynicism into which the COP held in Glasgow can fall if the promises are not translated into ambitious policies. “It is not that there is disaffection with the climate movement, but rather that there is a loss of faith in institutional spaces as they chain disappointments”, explains Irene Rubiera, who began her activism at Fridays for Future: “It was logical in 2019 after all the movement started with Greta “. Now 22, she acts as a legal observer for Ecologists in Action. “You have to facilitate rotation in an organization like Fridays,” he says. At the same time, he describes that “we have a lot eco-anxiety and it is understandable that that faith is lost, because we have 26 COPs without many solutions “.

This year, an international group of psychologists has portrayed how this disappointment affects the mental health of young Europeans: out of 10,000 respondents, 77% stated that they “were afraid of the future”, 68% were “sad”, 63% anxious and up to 37% felt “doubts about having children.”

Irene Vivas Lalinde, delegate of the Federation of Young European Greens in Glasgow, says that “in the majority there is a lot of disappointment at not being able to really influence the processes, that we are not allowed to enter the negotiation spaces, of including the word young, but keep it pretty shallow. Many activists have felt intimidated or had anxiety in the blue zone [la oficial]”And he adds that, on the other hand,” there is anger because the COP looks like a furniture fair, with much greenwashing (a term that refers to green marketing practices designed to create an illusory image of ecological responsibility), and the claims fall on deaf ears. “

The political scientist and executive advisor of the ecology and development organization ECODES, Cristina Monge, explains that the youth movement “is in a different phase” because the beginning “is a moment of explosion and explosion” that “is difficult to maintain for so long. weather”. The figure of Greta Thunberg, turned into a true icon, “generated an enormous impact”, but “no longer has the surprise or novelty effect”. And to this is added the arrival of the pandemic, a key element, in his opinion, to explain the current dynamics, because it has contributed to the “general demobilization of movements.”

Irene Rubiera confirms that “climate activism has been changing and the COVID-19 pandemic has had its influence.” A good part of that momentum and the movements that were even planned to be carried out were suddenly stopped, like the 2020 climate summit itself, which was postponed for a year. That has also raised expectations about what may happen in Glasgow, while also bringing the danger of further disappointment. “I always think that something positive will come out, but then I go angry,” confesses the observer.

“This COP is already a failure”, Thunberg dared to say at the demonstration called by young people in the Scottish city last Friday, in which criticism was heard of “empty words” and messages about “the festival of hypocrisy “which, in his opinion, the meeting has become. “We are facing a new COP, but how many more will we have to celebrate for the leaders to realize that their inaction is destroying the planet?” Asked Ugandan activist Vanessa Nakate.

“Actually, I don’t think you understand how terrifying it is to be 20 years old now,” says Rubiera. He refers to the fact that “when things like Filomena happen I think: ‘Oysters! When I am 50 years old this will be like this all the time.’ We have already grown up studying climate change in textbooks and I am going to be here at to get to that scenario. I’m going to have to manage it. It’s a scenario that, first, generates confusion and then is quite scary. “

For Emilio Santiago Muíño, climate anthropologist at the Higher Council for Scientific Research (CSIC), this does not mean that the movement has lost steam. “In this context in which the pandemic has not yet ended, I believe that the reading is positive and that we cannot consider that it has lost strength,” he says. In what the researcher does agree is that he may be giving himself “a certain feeling of disappointment or disappointment that is leading to perhaps skepticism prevailing in public speeches”.

In his opinion, the disappointment “is more than justified” because in the face of scientific evidence that warns of increasingly catastrophic consequences and already irreversible effects, “climate inaction is scandalous.” Monge, for his part, points out that expectations are high “and it is also necessary to evaluate what has been done with perspective”, but “it is logical that more ambition and speed be asked” and doing so “is part of the function of the company. social and youth mobilization “, believes the specialist.

Vivas Lalinde says that he has “worked a lot on the subject of anxiety through meditation and self awareness, but I perceive that there is a lot in many and many activists … It is complicated, because the more you know the worse “. Despite all this,” I believe that I will never stop being committed. Another thing is that the tools you use can change. It is difficult to say ‘this far I have come’ when I know that it is likely that when I am 54 years old the world will warm 3 ° C … It is difficult to escape the facts “.

Muíño also names another factor that can contribute to youth disaffection. “All the summits present a more or less recurring pattern that is characterized by a lot of rhetoric about measures that are not insignificant, but are far from what is needed according to what science dictates. Perhaps the youth movement had put in this type of events expectations that do not correspond later with what is agreed, and that may be a jug of cold water and translate into a more frustrated speech “, thinks the researcher.

The Young Green delegate affirms that “activism is there and will continue to grow in numbers and intensity in the face of the passivity of the international community. What is clear is that the urgency that many young people feel is not felt here.” Also that “despite the anger and disappointment, I do see young people thinking of running for elections in their respective countries, people who, although they know that much of the blah blah blah focuses on these spaces, believe that they can change things. From there”.

Rubiera, Vivas, Thunberg … they all coincide in the distance that separates their way of seeing the climate crisis – which has a direct and safe impact on their future – and that of those who are in command these days in Glasgow. But they also agree that “we are also the privileged part of the world” compared to impoverished countries. As the ecologist emphasizes: “We play in easy mode.”