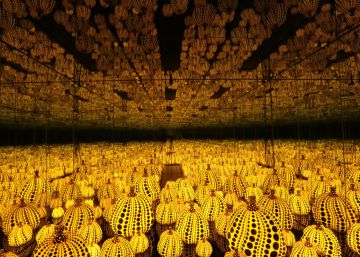 “You cannot eradicate violence using more violence.” Thus ended the letter that Yayoi Kusama Send to Richard Nixon, on November 11, 1968, a year before he became President of the United States. In the letter, the Japanese artist explained that the Earth “is like a small mole among millions of other celestial bodies, a place full of hatred and struggle in the midst of the peaceful and silent spheres. Let’s change all this, you and I, let’s make this world a new Garden of Eden… ”. Sure enough, I was inviting him to participate in an orgy. That was the deal: Kusama offered sexual services to Nixon in exchange for the ceasefire. in vietnam. “Calm your manly fighting spirit!”, He said goodbye in the letter. As far as is known, Nixon did not answer and the war continued for another seven years. Kusama never put a president back on the spot and continued to develop, as she calls it, her childhood hallucinations.

Four years before the attempt to make peace reign in the world, he had mounted his first exhibition in New York, in December 1964, in the gallery of Gertrude Stein. In the room, a rowboat full of penises or phallic protuberances sewn and stuffed. He painted the wall of the room with the reproduction of the photograph of the boat. He continued down the hallways and ceilings of the gallery, building an infinite mosaic and titled it Aggregation: One Thousand Boats Show. “Wow, fantastic Yayoi! I really like this “, says Kusama who told him Andy Warhol before the work.

Two years later, in April 1966, at the Leo Castelli gallery, Warhol took up Yayoi’s idea and multiplied the head of a cow by 100, in pink and yellow. It was his first major exhibition: the Pop art, thanks to Kusama. The artist, broken, took refuge in her studio and covered all the windows so that nobody could steal anything from her again. It was the first, but not the last time, that they took ownership of his ideas. Machismo and racism did the rest and Kusama became an invisible figure. Also for Yoko Ono, four years younger, despite overlapping circles of friends, and living two parallel life and career careers since the 1950s. This story is spun by disagreement.

In 1965 he created his first Infinity mirror: infinite rooms of labyrinths covered with mirrors from which it seems impossible to escape and from which it does not appear to escape. He transformed his paper work, the repetition of his paintings, into an experience of perception. Throughout his career – he turned 91 on March 22 at the Tokyo mental hospital where he lives by choice – he has set up more than twenty rooms that celebrate life rather than suffocate it. At Smithsonian Institution Hirshhom Museum The opening, on April 4, of the largest exhibition of these rooms and their organic sculptures was planned. In fact, the institution acquired two of the rooms for its collection last February, although they did not disclose the price they paid for them. Kusama – the most coveted living artist, with the highest prices on the market and exhibitions around the world, as well as a permanent museum opened in Tokyo two years ago – has imagined a world without borders between reality and hallucination.