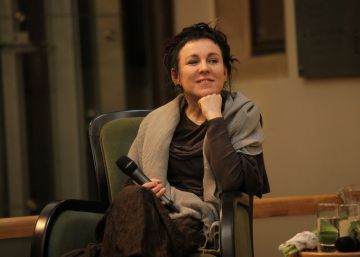 The Wanderers (Flights) of Olga Tokarczuk It was published in English in 2018. Anagrama will do it in Spanish on October 23. However, the novel had come out 10 years earlier in Polish. The book waited 10 long years before being known in English. But from then on everything happened very quickly, with the speed of the planes. He was first awarded the Man Booker International Prize for the best book translated into English (Jennifer Croft signed the translation) and now he receives the Nobel Prize. It is a very original book, very diverse and written with a lot of creative freedom. In it, self-fiction meets Sebaldian scholarship and the most imaginative fiction. Mix real and fictional characters. Sometimes it sounds daily, sometimes academic essay. There is no main character. It is not necessary in the 21st century. The voice of the narrator is what unites the whole novel. And the subject. The theme of displacement, travel. The trip in time and space. Is there another issue that best portrays our days?

In December 2010, I agreed with Tokarczuk at the European Literature Festival in New York, thanks to an invitation from Eduardo Lago. The German Jenny Erpenbeck and the French Philippe Claudel also attended. Tokarczuk seemed to me a very serious, rigorous writer. Last year I saw her again at the Brooklyn Library. He presented his novel with his translator. Not many people. He talked about his obsession with anatomy, very present in the novel. “We know a lot about the universe, about the stars, we study them every day. But how little we know about our bodies, about what's going on in there right now. We do not know anything. Hence my interest in anatomy. ” He talked about Europe and Poland, his country, a country that was invaded first by the Germans and then the Russians (not the Soviets) and Polish, a language that has given such good writers as Zsymborska, Herbert, Milosz, Zagajewski, Kapuscinski, Mrozek … He talked about everything this but also of his hair, which many people think is rasta. "It's not a rasta, Polish women used to comb their hair like this." The force of prejudices, prejudices that she constantly fights. He did not want to pronounce on Polish politics. She had come to talk about literature and politics can disfigure everything. In question time, it seemed he didn't remember well what he thought when he wrote The Wanderers 10 years before His mind was in new projects, in new books. "What I want is to return to Poland and write." Now you can't do it for a while. The Nobel prize rewards an original, scholarly and free writer. Pure literature of the 21st century.

the key is that you don’t have big toes