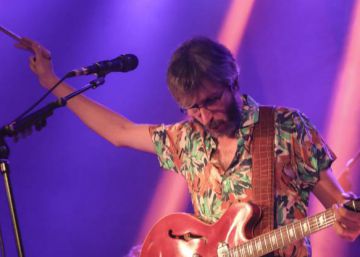 A Galician proverb says that “it never rained that it doesn't escape”. Maybe at some point in the last decade to Xoel López This saying from his homeland came to mind. At some point that began in that transit already known to all when he left the Deluxe project, he became the Americas, changed his artistic name and turned his style towards a different sound horizon.

It has been eight years since the publication of Atlantic, the first album with which he entered a new cycle. New and daring. Why Atlantic It opened a window with a landscape so vast that, at first glance, it was fading, especially to all those who had already assimilated the concept of Deluxe pop-rock so much, with so much Anglo-Saxon blood flow, that they felt bloodless. In fact, many rejected him. Atlantic It was something else, and sometimes something else is too much for those who just want the same as always.

However, the landscape was revitalizing. Not only Atlantic It ended up being an album of suggestive beauty and deep poetics (one of the best albums of Spanish music of the last decade), but it was only the beginning of the road. Then they arrived Paranormal Y Dreams and bread, in which the artistic landscape expanded to more unexplored territories, where Latin American folklore shared space with Stones Roses or The Jam, where the cumbia could be put funk and vice versa.

A vibrant panorama that has been gaining consistency on every tour. A few days ago I was in one of the two concerts that Xoel gave at the Circus Price in Madrid and this territory shone again and nothing new and yes very real and alive. There was a moment among several in the performance in which it was perfectly embodied. It was when the group launched with Bullets, composition belonging to his latest album Dreams and bread. That song with “soul and merengue spirit at the same time”, as described by its author, was a sound spree. He reminded me that in one of the many talks I have had with Xoel he told me: "I come from traveling like a saltimbanqui and I can't help this from sneaking into my music now."

Saltimbanqui, like his music, like him when he moves like a snake on the stage, like those percussions that bounce through his songs with joy, like those choirs that jump with enthusiasm with his voice, like that sound landscape he has offered us for years . It is the Xoel philosophy. A thought so unprejudiced and so eclectic that it should be praised with the same energy with which it is displayed live. One way of perceiving music that, if you have not yet done it completely, will end up in the coming years by opening a gap in younger generations of Spanish musicians. With the impulse of other saltimbanquis as Depedro.

The greatness of Xoel López is to have taken his audience to a new territory. There may be a lot of effort, but there is also a lot of natural and unstoppable curiosity in a musician who shows that the word artist fits him like a glove. When listening to Xoel, an artist is seen in all his conception. Following instincts, chasing muses and exploring spaces while playing with music and making the listener play.

In all this time since he traveled to America and then published Atlantic, Xoel arrived, like fine rain, some discredit, resignations and lack of understanding. I know for himself that also personal doubts, such as those of all the artists who change the pace from the security of the levels reached. In all this time, he must have thought many things and had to rethink them, but as the Galician proverb says: "It never rained that it did not escape." Today, the musical landscape of Xoel, like its Galician land, knows how to take advantage of the arrival of the sun and looks full of freedom and color.