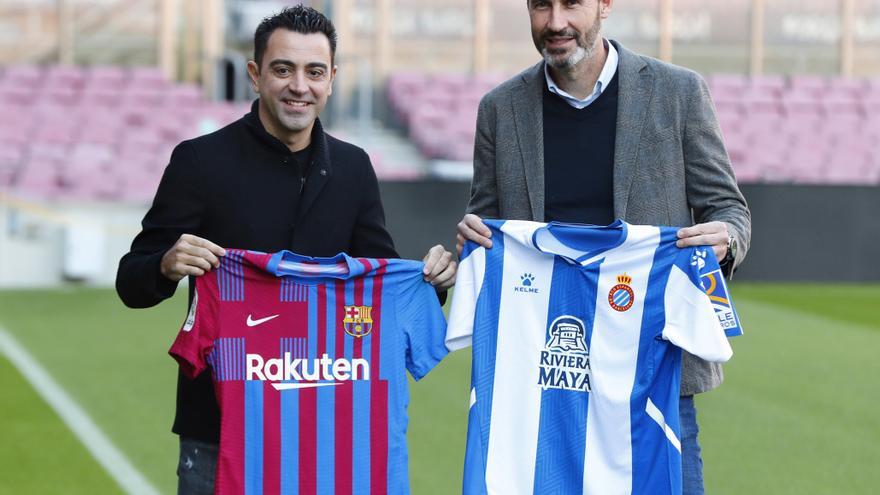 He first posed on the Camp Nou lawn with Vicente Moreno, the Espanyol coach. And then he took a seat in the press room. Not two weeks have passed since Xavi is the new technician of the Barça. Not two weeks in which he has lived after his spectacular initial start, the stadium was even opened to receive a coach, something totally unusual, taking refuge in the sports city of Sant Joan Despí.

Xavi has spent days trying to accelerate the implementation of his work method to reactivate a team that has been walking depressingly for years. He has been chatting with the players for days, especially at the individual level, in addition to implementing the new order of coexistence in a locker room eroded by the passage of time, with the leadership questioned since Messi’s departure. “I’m less nervous than when I was a footballer”, has confessed.

🔊 Xavi: “I’m less nervous than when I was a footballer”# BarçaEspanyol pic.twitter.com/3mblwtbj4A

Xavi appeared in the press room of the sports city dressed in a blue tracksuit, work clothes that he has used these days. At first he was alone. With hardly any players due to the exodus of the national teams. Later, with the entire squad. His long and serene speech lasted 32 minutes in which he had time to answer up to 25 questions. “The pressure is now for me and for the staff, not for the players“, has recognized the new manager of the Barça.

He has called for the help of the public (“it’s a derby, we need the fans”) and the strength provided by the home players, especially at such a delicate time. “When things go wrong, they pull the car. The players also feel bad and want to change. They want to regain feelings and win. Whether they are young or old, we are all in the same boat. It is difficult to be a Barça player,” said Xavi. .

“This positivism and illusion that has been generated around the club we must return in results from tomorrow“, said Xavi, warning about the” tactical wealth “that the” Espanyol worker of Vicente Moreno “gives off. Although Barça, which is ninth in the league, cannot make more mistakes.” At home it must be like a fort. We played a derby and you cannot fail, “he stressed.

The key concept of his Barça is clear to him. There are principles that are non-negotiable for the new coach. “We want to play well, create chances in attack, not speculate, press something, play in the opposite field … This way it is easier to get to the result. We cannot fail, we have urgencies. But without putting pressure on the players. I have already told you that the pressure is now on me, not on them. We are restarting a project, we want our game idea to be seen. ”

Xavi Hernández, in his first training session as a Barça coach. FCB

Without Ansu Fati, without Dembélé, without forwards …

The problem is that, as it already happened to Koeman, Xavi does not have the necessary resources to propose that game model, based on the game of extremes. “We don’t have Ansu, we don’t have Dembélé, we don’t have Martin“, he said in reference to Braithwaite. Nor to Kun Agüero.” I have not yet decided on the eleven, but we will have to pull young people, they are already prepared. We saw it in the Barça B game, “said the coach.

“It may be that there is some surprise,” revealed the coach, who continues to spin around the eleven with which he will debut on the Camp Nou bench, handcuffed as he is due to the lack of alternatives in attack. That is why he wanted to be understanding with Luuk de Jong (“everyone starts from scratch, everyone must be important”, he said about the Dutchman), in addition to showing his hope with Coutinho.

“Coutinho can be very important for the team and for the club. He has talent. He must find himself again”

“He has to regain confidence. He is a player who can be very important for the team and for the club. He has talent. He must meet again. He will have opportunities because he is a footballer that I personally like. Because of talent it won’t be because he has it “, Xavi said about the Brazilian whom he has urged to regain” lost confidence “after months of even feeling like a stranger to himself.” He must find himself again. ”

“I didn’t have to be a sergeant or anything. It is a question more of order than of discipline“He specified the famous code of conduct that he has established in the Barça dressing room.” This order must be followed. When I’ve had him, both as a player and now as a coach at Al Sadd, things have worked out. We are a pineapple, we are a family. Standards have been given a lot of importance, but they don’t have them. It is a matter of order, it is not necessary to shout or be a sergeant, “the coach stressed.

Alves kisses the shield during the presentation. JORDI COTRINA

“It was a decision between all of us. The president told me about it, I gave it a spin and it was done. Dani Alves is going to add us to everything. He is a positive uncle, a winner, who transmits character, has soul”

In this sense, he wanted to value very positively the return of Dani alves. “It was a decision between all of us. The president told me, I gave it a spin and it was done. Dani is going to join us in everything. He is a positive uncle, a winner, who transmits character, has soul. We have not signed him today for tomorrow but we have seen his last matches. He is a spectacular footballer, one of the best at the associative level. It will add us to everything“, has indicated Xavi.

“We have been very heavy”

Then, the coach has acknowledged that he has taken advantage of these days prior to Espanyol’s visit to establish his method at the Camp Nou. “We have been very heavy with the group. We have given the plate a lot. We have been heavy with what we want in defense, in attack, individually, collectively and by lines. I hope that tomorrow we can see things already, both in the game of the team as in the tactical and psychological issue, but we are aware that we are here to get results “.

“We are Barça, we must be fighting for all the titles, although we know that we are not starting from scratch. I want to transfer that positive energy”

Hence the need to beat Espanyol to safely start the new project. “I am calm, I am very positive, I am happy and excited. Less nervous than when I was a footballer. The most difficult thing is being a footballer, I want to convey my idea to the players. The sensations are good. I want them to feel happy, “he said, taking all kinds of pressure off” young people. ”

🔊 Xavi: “Memphis is a very important player for us”# BarçaEspanyol pic.twitter.com/8kdqG4gaal

But with a speech, at all times, full of ambition. “We are Barça, we must be fighting for all the titles, although we know that we are not starting from scratch. I want to transfer that positive energy. We are not in the position that Barça deserves, they must be at the top fighting for the title and qualified for the next phase of the Champions “, has remembered Xavi.

“Being culé I am going to leave my life so that this works. We owe ourselves to many people and we cannot fail them”

He then appealed to what is. And to what has always been. “I am culé. Now I am the one who has to decide. I am here to make decisions. I think we will go well. I will give everything to make it go well. I’m from Barça, I want it to work. As a culé I’m going to give up my life for this to work. We owe ourselves to many people and we cannot fail them. You cannot fail in values, in respect, effort, work, sacrifice. Not in that. The public must be very proud of the team even when we don’t win. ”