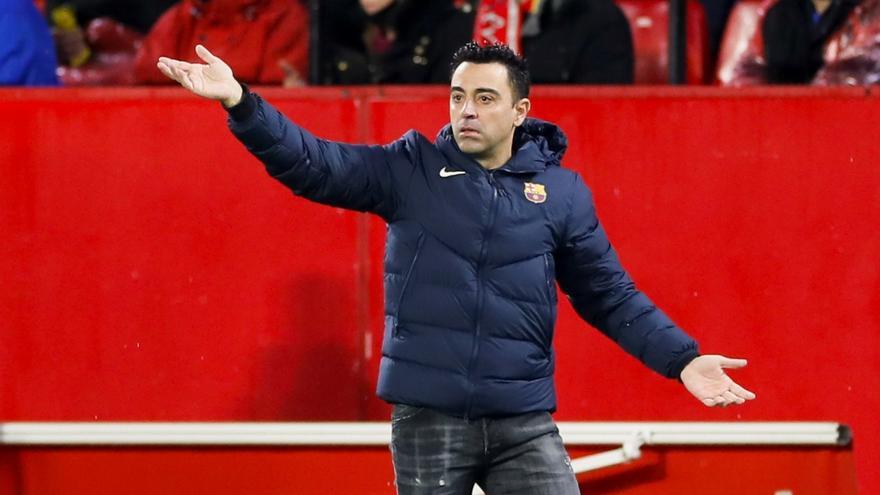 The coach of the Barcelona, Xavi Hernández, admitted after the tie to one in the field of Sevilla that "he has a bittersweet taste for not having achieved the three points", although he stressed that he believes his team is now "on the right track." Xavi considered "a shame" the tie achieved in numerical superiority in which it was "a good option to have finished the year well", but stressed at a press conference that "we must insist because the path is the right one", since the Barcelona, ​​"as with Elche", has completed "a great game." "I regret not having won. We should have done it after more than twenty minutes with one more. They have taken fouls, which is a way of defending. I am unsatisfied because the question is to give continuity to the good game for 90 minutes", added the Catalan technician.

The Barcelona coach estimates that, "despite the 1-1, the image has been very good"because his team has" tried to the end, but it couldn't be, "and he avoided referring to the referee's performance because" nothing is gained "and, furthermore, he only tries" to help him because whistling is very difficult. "

Lopetegui: "We have fought a lot and demonstrated character"

Julen Lopetegui, coach of the SevilleHe highlighted the dedication of his team and considered "a penalty for the conceded goal", because "he knew of Araújo's power in this type of action." "In the second we improved, we were squeezing them, but the expulsion -of Jules Koundé- forced us to take a step back when we were better. There was another game. The team has done a great job against a great team, something that must be valued very positively, "added Lopetegui at a press conference.

The Gipuzkoan coach did not want to influence the action that cost the French central defender the red card, who "knows that he has made a mistake, that he has let himself be carried away, he has lacked ground". In any case, he indicated that "it is a question of age" and was "sure that it will not happen again, because Jules is one of the players who learns."

The sevillista coach praised the youth squad Juan Luis Sánchez 'Juanlu' and Valentino Fattore Scotta, who debuted in the league in the final minutes, because "they have helped a lot in a very complex situation", something that "is to congratulate them."

Papu Gómez: "Until the expulsion we had them controlled"

The Argentine midfielder of Sevilla Alejandro 'Papu' Gómez regretted this Tuesday "the expulsion" of his teammate Jules Koundé, as he considered that "until then", his team "was not suffering" and had "controlled" the Catalan team. "I think it was a bit uphill after the expulsion, but we played a good game. Koundé is already great and will criticize himself, he will surely be angry. We were not suffering until the expulsion, we had them under control. It's a shame because we wanted to win it. . We were doing well, "Papu Gómez told Movistar.

The Buenos Aires footballer praised Barcelona by stating that "they have a lot of quality and if the pressure doesn't come off, it is normal for you to be in danger", especially because "you allow them long-distance shots." The Argentine international, who scored the goal in a strategy action, explained that "this morning, after watching a couple of videos", the coaching staff thought "that there could be a hole there and it came out perfect, round".

For his part, the Dutch defender Karim Rekik described the last game of the year as "a very tough game against a great team" and regretted that it "was complicated by the expulsion", although he considered that "the draw is fair", despite that "they have had more of the ball." "Personally, I am happy with the left-back game. I have tried to give everything on the field. Now, the holidays will be good," concluded the Tunisian-born footballer.

Araújo considers the tie against "a great rival" "a step forward"

Ronald Araújo, Uruguayan defender of Barcelona and author of the tying goal, considered "a step forward" having completed "a great game against a great rival and on their court". Araújo believes that the Barça fans were "superior, especially in the second half, "and he told Movistar after the game that it was" a shame not to have won ", although he indicated that" within the year "that his team is completing" it is good to be there. " been a very good first part of the season, but the objective It is close, "he said.

The Uruguayan center-back considers that Sevilla's goal, which came from a corner, "was his merit, that they did very well", and that the goal in the tie scored by him, also in a corner kick, is " a rehearsed play because they defend standing up and in the zone ", but" the curtain of Busi -Sergio Busquets- "facilitated their shot. "We are working a lot on the punch. Ferrán -Jutglá- is giving us a great help, although we need a little more goal," concluded Ronald Araújo.