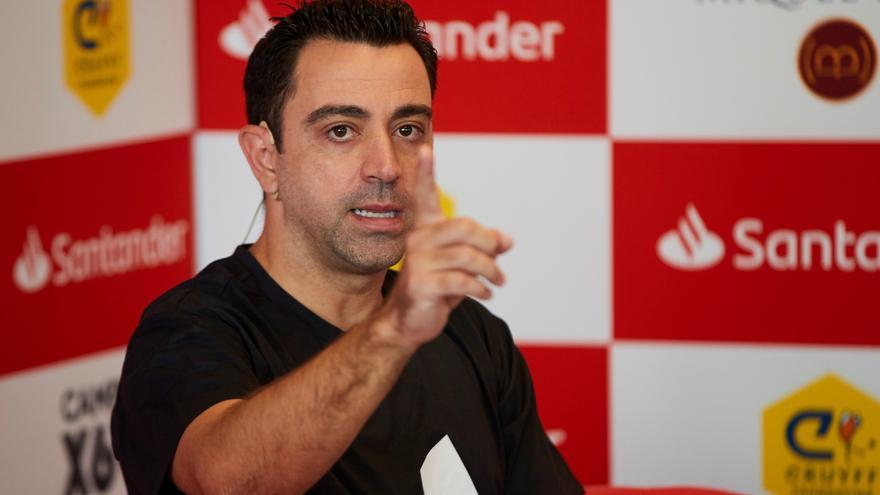 Xavi Hernandez, the former player of the Barcelona and the current coach of Al Sadd, assured this Thursday that He has not spoken with the president of the Barça club, Joan Laporta, “During the last months”.

“I am always in the market. I have a very good relationship with Laporta, in the end he is there to make decisions and I have not been able to speak with him or anyone on the board of directors lately. They have decided to continue with a coach who has a contract, who is Koeman and he is a legend, and he must be respected“, he said when asked – at the presentation of his summer campus at the Santander Work Café on Passeig de Gracia – if he was surprised that Barça did not call him this summer. In any case, he ruled that”it’s a dream and an illusion to return to the club“of his life.” But I’m not in a hurry, although I’m ready and I’m sorry, “he added.

“I did not separate myself from anyone because I did not mark myself with anyone. I already made it clear that I would not be active in the Barça elections,” he said about his relationship with the candidate Víctor Font in the last elections. “I have a very good relationship with Font and Laporta and I do not think that it has harmed me that I was wrongly related to a candidacy,” he considered.

Regarding whether it bothered him that there were certain opinions that doubted whether he was prepared to train Barça now, Xavi said that, erroneously and due to ignorance, it is said that “the Qatar league and the Asian Champions League have a lower level than they really are. there are, and this is halfway between the Spanish First and Second Division “. In this sense, he advanced that his idea “is not to take a previous step to train Barça B before doing it with the first team “, because he is currently training in the elite of football.

Xavi also admitted that talks often with Barcelona players like Ter Stegen, Sergi Roberto, Leo Messi or Sergio Busquets, “but not on these issues.” In addition, on Busquets he said that if he were the Spanish coach, he would wait for him “for the Eurocup“Despite the positive for coronavirus. On this issue he also opined that” all the players of all the teams that go to the Eurocup would have had to be vaccinated.

He also gave his opinion on the future of Leo Messi in a Barca key: “Because of everything that is happening I think Messi will continueBut it is his decision and he has earned the right to decide because for me he is the best player in the history of football. ”

And about his summer campus, whose new edition was presented this Thursday, he explained that the idea came from his father and his brothers “and it has been growing”, and that its purpose is to “enjoy and promote the values ​​of sport.” The campus is sponsored by Banco Santander, is based in El Collell (Banyoles) and has 300 boys and girls: “I am telling them that I hope they can reach the highest level in football, but also that there are many more things in life than football and that they should not be frustrated. ”

One of the current stars who passed through the Xavi Campus in the past was Alexia Putellas, current European champion with Barcelona. “It is wonderful to see all these players who have made history play,” said the former Barça player.