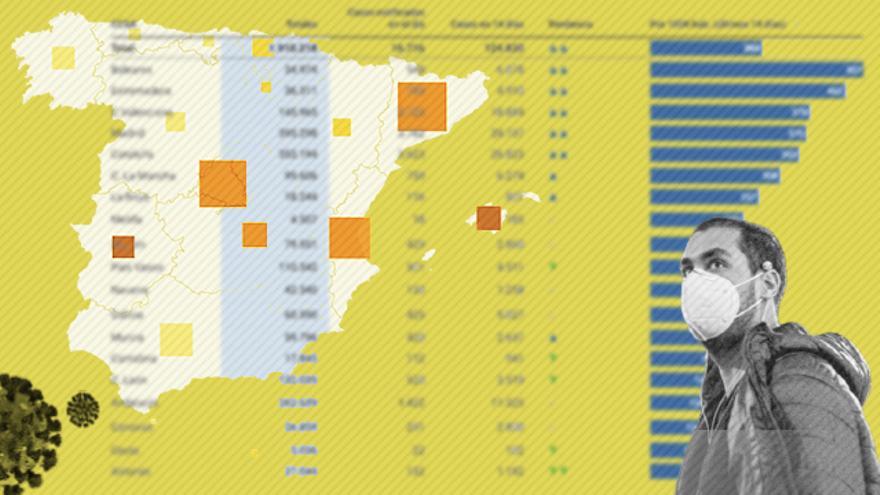 The COVID-19 pandemic is not over even though the mass vaccination campaign has been launched. It is still very active in Spain and in the world. In fact, the indicators have been increasing for days, drawing a picture that epidemiologists describe as “worrying.” Whether or not it is called third wave, the disease reappears. COVID-19 is close to two million infected in Spain and exceeds 50,000 deaths with a confirmed diagnosis, according to the registry of the Ministry of Health based on data from the autonomous communities. If those cases with high suspicion of having SARS-CoV-2 are considered, as the INE does, the figure would climb much more. This is the radiography offered by epidemiological data at the beginning of 2021.

The curve goes up again

The coronavirus has once again increased its circulation in Spain. That is, contagions grow. This Thursday, more than 18,000 new cases were reported, the worst figure in the last month and a half.

Evolution of the curve of new cases, admissions, ICU and deaths in Spain

This Monday, the director of the Emergency Center, Fernando Simón, spoke of “possible stabilization” of the rebound, but muted it: “With great caution.” The week has diluted that little hope. The pattern of behavior of the pandemic has been repeated again as transmission grew after dates marked as holidays. It has happened with the bridge of the Constitution and the onslaught of Christmas is expected. Later, in the same vein, the hangover on New Year’s Eve may arrive, already in 2021.

The current situation is shown (figure from 7 days ago to reduce delays) compared to the maximum peak of cases, admissions, ICU and deaths

The accumulated incidence in the last 14 days in Spain, which shows the relevance of the pandemic, has been placed at 279 cases per 100,000 inhabitants. It is the worst data since the end of November and continues to evolve upward in almost all the autonomous communities.

However, some regions such as the Balearic Islands, Madrid or Extremadura show data with which it seems that the disease is tightening and escaping control. In the Balearic archipelago and Extremadura, two of the communities with the best data recorded in the first two waves, the 500 cases have already been exceeded and in the Community of Madrid there are already 400 new infections per 100,000 citizens in two weeks, closely followed by the Valencian Community, both in full escalation. The winter weather conditions, which have provided an intense cold front, favor meetings in closed environments. One more ingredient for these incidents to skyrocket at the start of January if epidemiological risk situations are not avoided: numerous meetings, with short distances, closed and relaxing the precautionary measures in a festive environment.

The latest update of the map with the data of more than 5,400 municipalities that elDiario.es publishes every week points in the same direction. More than half of the Spanish population lives in localities where infections are growing. Only a quarter of the Spanish population resides in municipalities where the cases have decreased in the last two weeks. Data from large capitals such as Madrid or Barcelona are worrying, where cases have grown by 62% and 92% respectively in the last two weeks. In Palma, the capital with the highest incidence –790 cases per 100,000 inhabitants in two weeks–, the increase has been more than 100% in that time.

It is the most dramatic data that grows as long as a specific treatment is not given or the herd immunization plan is completed based on the administration of vaccines. The first, at the start of the new year, seems still far away. The second will take months, at least until the summer, when about 70% of the population can be immunized.

In the second wave that occurred in autumn, the peak of deaths came at the end of November, almost a month after the peak of infections at the beginning of that month. He was close to 300 dead. With saw teeth, the efforts managed to reduce the figure to around 120 already heading towards the end of the year, but in recent days it has grown again (on December 31 there were 148). The pandemic has shown that the price in lives always comes late with respect to the increase in cases.

The official number of deaths from COVID-19 offered by Health refers to people with a confirmed diagnosis and exceeds 50,000, although the National Institute of Statistics shows an image closer to the real situation despite the fact that it may have diagnostic inaccuracies because it collects data in which the patients suspected of suffering from COVID who die are also attached to this statistic.

The great concern. The more general cases, the greater the volume of patients who need to be admitted to a hospital. And, at the end of the chain, there will also be more severe cases that will need to enter the ICU.

At the beginning of 2021, the general situation is that almost one in ten hospital beds in Spain has a COVID patient. And one in five intensive care posts is for a person with the coronavirus. Both percentages speak of the growing pressure in the health system. In a context of increasing number of infections, the ability to care for everyone who needs it begins to crack. In the first wave, hospitals dedicated themselves exclusively to the pandemic. In the second, without reaching that extreme, there were centers in different autonomous communities that slowed down consultations, suspended surgeries and postponed diagnoses. Many health centers were overwhelmed by the accumulation of tasks: treating patients, tracking contagion chains and making up for time lost during the spring with the chronically ill. As if that were not enough, in January, the country is in full flu season. And in the coming weeks, health centers will also have to tackle the vaccination campaign.