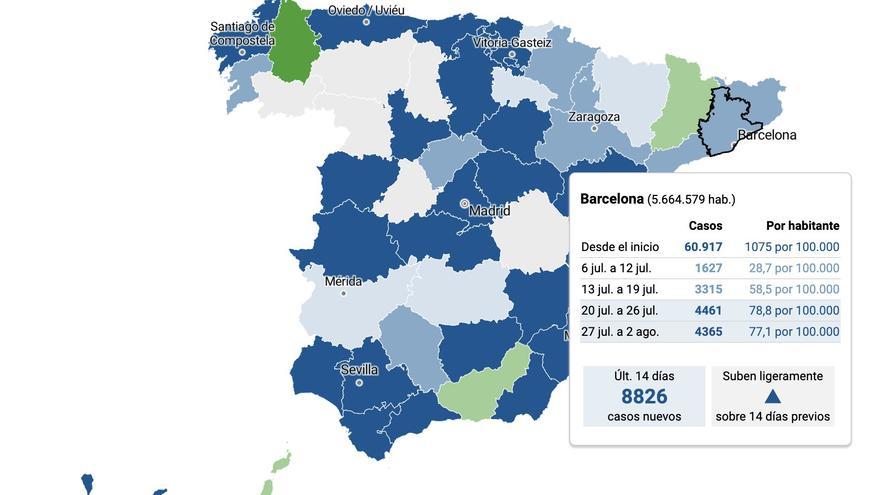 In the midst of a wave of outbreaks, Spain has been registering an important rebound in coronavirus cases since the beginning of July, which places the country as a whole almost daily with the highest positive figures recorded in seven days since the start of the de-escalation. The situation is, however, very different in the different territories, which is why experts agree that the situation should not be diluted in the global data, but that understanding what is happening also requires a fine analysis on a smaller scale, as is the case of the provinces.

At this level, the Carlos III Health Institute (ISCIII) offers data through the National Epidemiological Surveillance Network (RENAVE) and does so by the date of onset of symptoms or the date of diagnosis for asymptomatic cases. Although there are more and more provinces in which the number of new infections has exploded in the last two weeks, a time frame based on the map that can be seen below, the situation is still heterogeneous and there are some provinces in which New cases even descend, especially those in which the first outbreaks were registered, such as Lugo and Lleida. There are also several provinces where the circulation of the virus is still low and there are only three dozen cases in the last two weeks. In the second tab of this map, the one referring to the cases accumulated by inhabitants in the last 14 days can be seen which are the provinces most affected by the outbreaks.

The containment measures adopted in the first major outbreaks detected after the de-escalation have made it possible to limit transmission in the provinces of Lleida, Huesca or Lugo. In Barcelona, ​​although it continues to register increases, the speed at which the virus spreads has decreased in the last week. Something that also happens in Zaragoza. This is not the case in Madrid, which registers an exponential increase in the number of weekly cases in the last month after the start of the de-escalation marked by the absence of significant outbreaks. The evolution of the situation in each province since the start of the pandemic can be seen in the following graphs.

Evolution of the number of new cases according to whether cases have gone up in the last two weeks over the previous two, they are going down or remain unchanged or with few cases. It shows the average of the last 7 days by symptom onset date or notification date

Figures not comparable to March

Although the numbers of infections are increasing, experts indicate that they cannot be compared with the curve in March, when the rise in infections led to the confinement of the population of the entire country as of day 14. “The surveillance system is completely different from then, “stressed the spokesman for the Ministry of Health Fernando Simón. If four months ago only the cases of those who went to hospitals in the most serious state were detected, that is, “the tip of the iceberg” in the words of an epidemiologist, now it is detected between 60 and 70% of asymptomatic cases thanks to contact tracking systems when a positive case occurs. Although the system is not working perfectly (communities track suspected cases to a “very low” level in the midst of a wave of outbreaks, with Catalonia and Madrid at the tail), it is bringing to light many more cases, and Spain is approaching the 300,000 infected with COVID-19 confirmed since the start of the pandemic.

Profile now has changed: the median age (the central number of the fork) has gone from 60 to well below 50, and if before May 10 those under 30 accounted for 7% of the total, now they are one in every four. Fernando Simón blames the drop in age both on the situation of seasonal workers and the risky conditions in which they live and work, as well as on the attitude of “young and not so young” and the relaxation of protection measures.

We are dedicated to covering the coronavirus epidemic and its consequences. If you like our work, support us. Our independence is possible thanks to the commitment of more than 55,000 members who pay for us to be free.