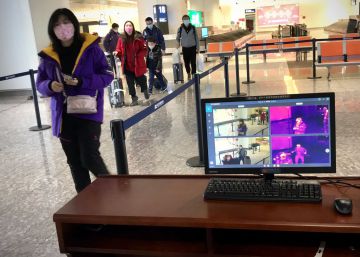 Wuhan’s coronavirus has already arrived in Europe, where France confirmed on Friday the first two positives Registered in the continent. And this despite the Chinese effort to increase and intensify its measures to tackle as soon as possible the rapid expansion of the pathogen, which has already left at least 41 dead and more than a thousand infected in that country, according to the latest figures offered by Bloomberg, in addition to another 20 patients diagnosed in eight countries –USA, Thailand, Vietnam, Singapore, Japan, South Korea, Nepal and France; and one in Taiwan.

The first cases in Europe were announced in Paris by the French Health Minister, Agnès Buzyn. Two have been diagnosed in a hospital in the French capital and are apparently related to each other and the other in a health center in Bordeaux, in the southwest of the country. Although all three patients are admitted, they have not transcended more details about their state of health. Buzyn predicted that they will probably be diagnosed more cases in France in the next few days. In Spain, Sanidad ruled out two cases under study in the morning, but at night, the Basque Country Health Department reported that they had a patient with some suspicious symptoms that was under surveillance and had recently visited Wuhan.

Meanwhile, at the epicenter of the outbreak, China fights the crisis with measures from the most spectacular to the most basic. From the search for possible cases using the most modern technology, to the traditional chivatazo to locate undetected cases. Perhaps the most spectacular measure, colossal, is full-scale construction of a field hospital with capacity for a thousand beds and it will be finished in 10 days, on February 3. It has not been repaired in the media: workers receive a salary that triples the usual to progress as quickly as possible, according to the Hong Kong newspaper South China Morning Post. To accelerate the work, prefabricated modules have been chosen.

The idea of ​​setting up a newly built hospital and referring those infected with the coronavirus reproduces what was done in 2003 during the Severe Acute Respiratory Syndrome (SARS) epidemic that left more than 700 dead. Then, Beijing ordered to build a specialized clinic, that of Xiaotangshan, on the outskirts north of the capital. About 7,000 workers took just a week to build.

In addition, nine provinces and municipalities, including the megalopolis of Beijing and Shanghai and the Hubei province, the epicenter of the infection, have declared the highest level of public health emergency. This leaves the response to the crisis in the hands of the State Council – the Chinese Executive – which on Friday warned that “the spread of the virus has not been cut” and “local authorities must take more responsibility and hurry up.”

Efforts will focus, in part, on locating those who have been able to leave Wuhan, the city where the contagion originated, and other nearby areas in the risk zone, to determine if they are carriers of the pathogen provisionally known as 2019- nCoV. The provincial government of Hubei has assured that it will investigate how it has spread and how the infected left Wuhan and where.

Beijing, where at least 29 cases have been detected, has also begun inspecting people who have passed through Wuhan. Your airports will begin to take the body temperature of each passenger. The local government of the Chinese capital and that of Shanghai have begged those who have gone through “key areas” of risk to remain at home or in quarantine for 14 days.

The State Council, for its part, has requested information from the public about possible cases in which the disease is hidden or the number of infected is manipulated. Those who know something will be able to leave details anonymously on an Internet platform that is usually used to report corruption cases. The Executive has also announced that it will send teams of investigators to examine violations in control and prevention procedures.

The Chinese authorities have already extended the quarantine that began to be imposed this Thursday in Wuhan to 14 cities in Hubei. In total, almost forty million people, half of the population of this province, have restricted their freedom of movement, to an unprecedented extent in these dimensions.

In Beijing, sections of the Great Wall and the emblematic Forbidden City have been closed until further notice. In Shanghai, Disneyland has temporarily ceased operations. 70,000 cinemas have also been released and the producers have suspended the premieres they had for this time of year, one of the most attended theaters for the Lunar New Year holidays. The Chinese basketball federation has also announced the postponement of its matches.

On the ground the situation is far from being flattering. Wuhan hospitals are overwhelmed and their supplies are at a very low level. The main health care centers have publicly requested donations of all kinds of protective material from Friday, from disposable sanitary masks to glasses and surgical gowns. As published by the state-owned newspaper The paper Hospitals only have this type of equipment for just five days. To alleviate this saturation, the Chinese Army will send military doctors to reinforce local health personnel.