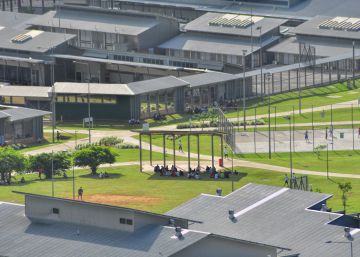 The Australian Government announced the Wednesday that will offer flights to its citizens trapped in Wuhan City to be quarantined for 14 days on Christmas Island in a controversial migrant detention center. But the transfer will not be free. Each person who wishes to be transferred to the island will have to pay 1,000 Australian dollars (610 euros), according to reports The Sydney Morning Herald.

When the quarantine is over, they will be taken to the city of Perth, on the west coast of the country, from where the rescued will have to pay the return to their homes. This city is known for being one of the most isolated metropolis in the world, with the next closest city (Adelaide) more than 2,100 kilometers away. “I can't clean a hospital in Sydney or Melbourne to isolate people, ”Australian Interior Minister Peter Dutton said yesterday in defense of the measure.

Christmas Island is known for hosting an immigrant detention center heavily criticized by human rights organizations such as Amnesty International. Open in 2008 and closed in October 2018 (it was reopened in 2019), this center has been the scene of riots, suicides and scenes of self-mutilation, due to the harsh conditions to which the people held there are subjected. Many of those who passed by were minors.

Since 2013, the year the Coalition (a union of right-wing parties) came to power, the Australian migration policy has been based on systematically repelling all those illegal immigrants trying to reach its shores. Once intercepted, migrants were transferred to Christmas Island and other centers outside Australia. Currently, there is only one family of four people living on Christmas Island (a couple from Sri Lanka with two girls born in Australia), who reports The guardian, has not been notified of the Government's plans. The family was arrested in 2018 at their home in the State of Queensland, because their visa had expired the day before. Since its reopening in February 2019, the center where 109 people work and there are four detainees has cost the State 16.3 million euros.

Some of the Australians in Wuhan have already shown their rejection of Morrison's plan. "Many said they can't accept it ... After all, many Chinese-Australians know what kind of place Christmas Island is," said Moko Yong, one of the people trapped, in statements to the local media. The Age

“We are focused on the most vulnerable, especially babies and the elderly. That would be our priority in any operation we can implement, ”Australian Prime Minister Scott Morrison said Wednesday when he announced the evacuation plan. The Executive stressed that the operation has yet to be agreed with the Chinese authorities. Currently, there are 600 Australian citizens trapped in Hubei province.

"[DE ACCIÓN]We are moving very, very quickly to make sure that we can put together this plan and carry out the operation, ”Morrison added after insisting that those who wish to accept the aid must decide quickly. For his part, the Prime Minister of New Zealand, Jacinda Ardern, said they are working so that New Zealand citizens trapped in Wuhan can also be evacuated.