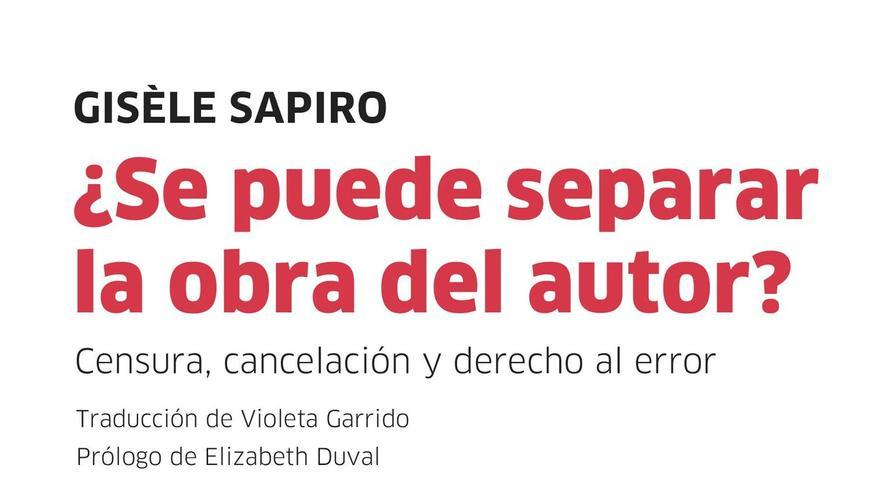 Since some years, the debate has not stopped growing in the networks and outside them: What do we do with the work of artists who have committed sexual offenses? And with those who defended xenophobic or anti-Semitic positions? And with those who supported dictatorships or criminal regimes? Do we keep reissuing books that make apology for the pederasty? Do we reward directors accused of rape?

It has recently been published in Spain ‘Can the author’s work be separated?’ (Intellectual Key). Sociologist Gisele Sapiro, disciple of Pierre Bourdieu and with a prestigious track record in France, received the following commission from the publisher Seuil: write an essay that will try to put pause and rigor in the debate, attending to the particularities of each case. Confinement was then decreed, which meant having time — though also much more difficulty in accessing some bibliographic sources — and she accepted.

The book brings a foreword by Elizabeth duval which helps to place the question in Spain, where it has had much less development than in France or the Anglo-Saxon world. In these pages Duval confesses his adoration for the poetry of Gil de Biedma, but without forgetting its episode of child abuse and prostitution in Manila. And it also reminds us when, in 2019, Albert rivera declared that Cristina Morales placeholder image, the recent National Narrative Award, “should not collect that money from the Spanish people” for having said that he was glad of the riots after October 1 in Barcelona.

Already in the rehearsal, Sapiro carefully studies the case of Peter handke, whose Nobel Prize unleashed numerous criticisms from those who considered him a defender of Slobodan Milosevic; calls into question the relevance of continuing to reward Roman polanski when new accusations of rape weigh upon him that cannot be judged because they have prescribed; and reviews the case of Gabriel Matzneff, an author who has repeatedly recounted in non-fiction books his sexual encounters with minors – in Spain the matter had some repercussion when ‘The consent’ was published, where the writer Vanessa Springora revealed her version of how those encounters had been in which she was 14 years old and Matzneff, 49-.

Polanski at the 2017 Cannes fetsival for his film ‘Based on a true story’. Roman Polanski attends the ‘Based On A True Story’ screening during the 70th annual Cannes Film Festival at Palais des Festivals on May 27, 2017 in Cannes, France.

Asked about the reception of the book in France, Sapiro replied that “in fact, I have brought together very different cases in a single book to be able to deal with the subject as a whole. I think that is the reason why my essay has been so good reception”. It was precisely the Polanski case that gave rise to the only negative criticism: ‘It was at Le Monde des Libres’. The critic was surprised that I was more severe with private behavior than with ideological positions: it is a strange reading, because on the one hand Polanski’s rape took place in a professional setting, not at all private, and on the other hand I am not lenient with the ideological. I have also had one or two rare attacks, very violent, very marginal, with a clearly sexist and right-wing approach, to which I did not respond. Oh, and a fit of Emmanuel pierrat, Matzneff’s lawyer, who he saw in my book – which he obviously hadn’t read – an extension of the American cancellation culture. I did respond to him publicly. ”

When the earthquake of the #MeToo, in France some actresses and writers, such as Catherine Deneuve, Catherine Millet or Briggitte Sy, they signed a manifesto, without reply in other European countries, against “sexual puritanism”. The signatories condemned the conduct of Harvey weinstein and other abusers, but they defended “the freedom to pester, indispensable for sexual freedom.”

“The manifesto,” says Sapiro, “was signed by dominant women who reproduce male domination in the name of sexual freedom. In her opinion a woman must accept insistent and awkward flirting, and even allow oneself to be touched at work or in the subway, and to do so out of compassion for the sexual poverty of others. For them, this does not affect their dignity or integrity. Of course, this manifesto comforted the dominant male world, which remains convinced of its power of seduction. Powerful men who abuse their position of power are concerned with their charisma and not with their victims, who objectify when they interpret their refusals as flirtatiousness. This manifesto, which was unmarked from the MeToo feminists, contributed to discredit the movement by passing it off as a radicalism from the United States and totally alien to French culture. ”

Precisely to put an end to both abuse and that “insistent and clumsy flirtation” that can occur in the workplace, the author proposes “a deontology of labor relations in collaborative arts such as film, theater, opera, dance, or fashion. Some professional organizations are already thinking about it. As for the individual arts, a deontology cannot be established, but there is an ethic of the profession of the writer or of the artist, an individual ethic of creation that refers to the subjective responsibility of the author, and a responsibility of cultural intermediaries ” .

In cases that have to do with conflicting ideological positions, one of the main elements to settle is what the author’s intention was, be it an essay or a comic monologue. “In our liberal democracies, writers and artists are free to challenge the social order and criticize regimes or religions -explains the author-, but not to incite crime or damage dignity and the reputation of individuals or groups based on their origin, religion, gender, or sexual preference. In these cases, the courts must judge the crime. ”

The problem is not freedom of expression, but now racist messages use fiction to escape justice

In that sense, Sapiro denies that freedom of expression is at risk today: “The decisions of the courts confirm that justice takes into account the fictitious dimension of the texts, except when it comes to defamation or invasion of privacy. The problem is not freedom of expression, but now racist messages use fiction to escape justice, as in the case of the magazine ‘Valeurs actuelles’. There a story was published in which a deputy from La France Insoumise [el mayor partido de la izquierda francesa actual] She was portrayed as a slave, with drawings showing her with an iron necklace around her neck; the slaveholders were Africans and not Europeans. She filed a complaint for “public insults against an individual because of his origin” and the weekly argued that it was a fiction. In this case it was not enough and the author of the news and the writing were fined “.

The essay also addresses one of the most difficult cases for the Western canon to digest, that of Heidegger. The ‘Black Notebooks’, Protected in their day and finally published between 2013 and 2015, they ruined decades of efforts aimed at preserving the figure of the German philosopher. In them all the anti-Semitic thinking of the author is condensed. Still, there have been intellectuals who have defended Heidegger, arguing that his position was due to an error, confusion, or wandering of the philosopher.

“Can we say that the intellectuals who called for the execution of the hostages were wrong, such as Maurras [el principal referente histórico de la extrema derecha francesa], who wrote ‘death to the Jews’, like Rebatet, or who said like Brasillach ‘don’t forget the little ones’, that is to say, the children, at the time of the Jewish raids? What was the misjudgment? Can we relativize the stigmatization of vulnerable, persecuted and oppressed social groups, which legitimizes the physical violence to which they are subjected? Is it a matter of opinion? I think that the speeches are performative, they have a stigmatizing effect that later legitimizes the policies. “In addition,”neither Heidegger nor Maurras ever expressed the slightest regret“And he concludes:” If these intellectuals, these ‘influencers’, these ‘opinion makers’, holders of symbolic power, are not responsible for their words, I don’t know what the notion of responsibility means. ”