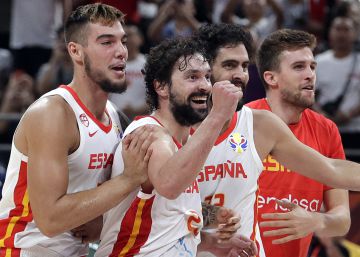 In moments when fear becomes a chill that travels from the head to the extremities, the rivals shrink their wrist and heart. In the moments in which the emotion suspends the discernment to Spain, the memory of the champion is unleashed and the blood burns. The true Serbia of the World Cup turned out to be Australia, a stony and graceful team at the same time; tall, wide, long and deep. From famed Paty Mills to the unexpected Nic Kay, from Dellavedova to Bogut. But with them the Spanish team could also, for resilience and lucidity, for heart and head. And by ambition. No one mentioned the word 'silver'. “There are players who know how to play in these situations and in the end they emerge. Experience and personality are a value. The value of the experience ”, launched Scariolo. All the players who resisted all Australian attacks and escaped all ambushes were running through his mind. "Ricky has made a great second half, Rudy an extraordinary defensive game … Victor (Claver) has been amazing again … Sergi (Llull) a great game, Pau (Ribas) has helped a lot … Also Willy, Oriola and Juancho have laid their brick ”Reviewed the coach. All, but especially one.

The name of the match was undoubtedly Marc Gasol. The NBA champion came to the break with only four free throws in his file, but scored 29 points in an outcome for the team's hemeroteca of feats. “It has been a bit like ketchup, which costs to open it but when you get it it goes everywhere. The basket was uncovered, has made important shots and has greatly complicated the rival's plans. Tactically it is very important because it takes away from the hoop those who protect his painting ”, explained the coach between jokes and see before analyzing the deed that was worth the pass to the final. “Australia made it difficult for 50 minutes but, once again, the sum of heart and brain we have had has been higher. We have been able to play patiently with complicated moments, without falling apart at any time. They were 11 points up, Mills was doing us a lot of damage, they took a lot of rebounds … but the competitive character and personality has led us to never throw in the towel. Afterwards, we arrived with a lot of head to the decisive moments of the game, ”explained Scariolo, who confessed to having enjoyed the uncertainty. “The most beautiful thing is when you have to challenge yourself, show coldness and concentration to talk and change things or let those who are doing well on the court act. The funniest part of my job is to play matched matches, ”he said.

Scariolo continued to knead words to define the feelings that crowded him. “Perhaps it is the most unexpected medal. Only with heart you don't win. That, knowing them, I can take for granted. But then you have to add a lot of head. The last 16-17 minutes has been a lot of head. We live to get medals and win titles, but getting to the last day with these players is to be grateful. We have enjoyed the road and we want to complete it ”, completed the coach, who is one step away from conquering the NBA and world gold in the same course. Just like Marc Gasol, who, like the first phase, put a temper on doubts, in the victory he was fed up with euphoria. Exhausted after his exhibition, he only visualized dinner and the massage table.

"I give everything always and you always expect the result to be positive. I am very happy to be in the final, it was our wish. Now to rest as quickly as possible because on Sunday we have, nothing less than the World Cup final," began his Parliament, wanting to expedite the procedures before the microphones. "To which one has entered, or a couple in a row … It is what happens sometimes, when you enter rhythm it is easier," he resolved in a flash the analysis of his exhibition to talk about the collective. "We have been believing in this for many days, since July 23 we concentrated and started working to get here. We are happy to be here and now, as always, with ambition to the fullest. "Do they have the gold in line? They asked him." When we jump on the track we want to win, to work, to do it especially together … And since we are here … ”, he finished.

To size Marc's memorable performance, it was enough to listen to Juancho Hernangómez. “Marc Gasol has come to implant his name. He has been the leader, that's it. He has had a first part a bit like that, but in the second he has dominated and thanks to him we are here. He has made four key free throws at times when the head can play tricks on you. It has been our mvp and has taken us to the final. Now we have to go to die, ”he released suddenly, almost without breathing. "It was probably the best game I've ever lived in my life … This team is like that. We have all played with eggs. It seemed impossible, but when you never stop dreaming these things happen. Basketball is impressive and today we have touched the good side of the coin, ”he continued between his mouth open and ecstatic. “The pride that this group has is amazing. It has cost us a lot but we have taken it forward. Now, where the legs do not reach, the heart will have to reach again. This team was born with this and in each championship it is exceeded, ”Juancho completed. The key to this sequence of feats? They threw Sergio Llull. “We learned from Navarro, Pau, Felipe… Now they are not here, but they will be happy to see us in the final. We are going to fight it, ”closed the Madrid player, appealing to pride, to memory, to the memory of the champions. The ambition of the group was summarized by omission. No one mentioned the word 'silver'.