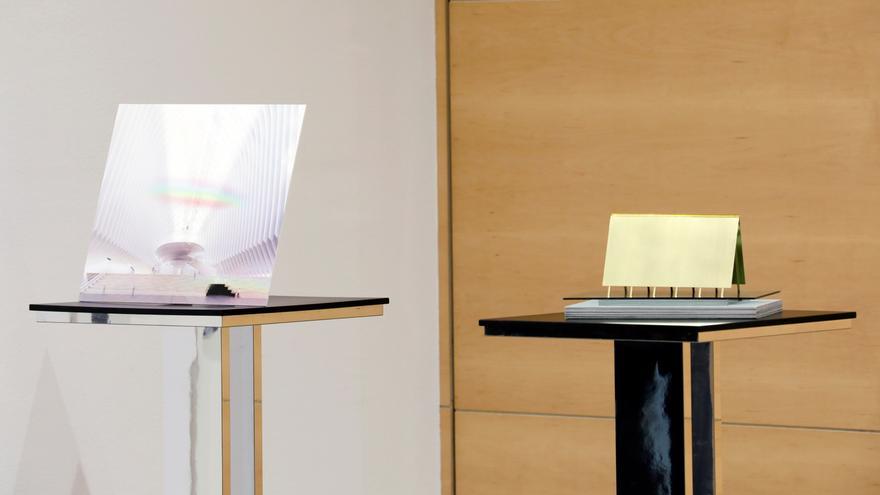 València, Apr 21 (EFE) .- The Arc al Cel, a project by Inma Femenía that will take advantage of sunlight and reproduce the rainbow inside the Agora, and the Palafit, a sculpture by the artist Anna Talens whose reference point is agrarian architecture characteristic of the Community’s aquatic ecosystems, will be the permanent works that the future CaixaForum València will have, which will be located in the Ágora building, within the cultural complex of the City of Arts and Sciences.

In a press conference, the deputy general director of the La Caixa Foundation, Elisa Duran, has assured that the forecast is to open the CaixaForum de València to the public in July 2022, at which time these works will be presented, which will remain unchanged. permanent in the ninth CaixaForum of LaCaixa.

The artist Inma Femenía explained that the Arc al Cel, which will be seen at a height of 30 meters, will take advantage of natural light and “we can only see it when the methodology allows it”: “When it enters through the windows there will be an optical system that will decompose the light and it will allow us to see it ”, he highlighted about a project that has been carried out ad hoc for the space.

Femenía has stressed that it is an “immaterial and intangible” work, that “integrates and dialogues with the project” and that it will reproduce the “emotions and meanings” that this optical phenomenon transmits, since, by looking at it, “we will be able to intuit the iconic character of utopian landscapes that the rainbow usually represents ”.

Regarding the Palafit, Ana Talens explained that “she could not understand the project without understanding where it will be”, since it is immersed in the Ciutat de les Arts i les Ciències complex, in the old Turia riverbed.

For this reason, he has stated that the pools of water next to the Agora made him think of the “fruitful and tragic” history of the city, as well as the rice fields and the lake of La Albufera, “a space for thought” which is the one that Talens wants to “activate”, at the same time that he has affirmed that this work will look towards La Albufera.

Thus, he recalled that the stilt houses are historical constructions prior to the barracks, built on water, and that they were similar to “agricultural temples”, so, with this work, he intends to reflect that these constructions “are not only for the past , but as an image of the future ”of a city that has“ many natural qualities ”and that has“ its own self-esteem for the earth ”.

The deputy director of the La Caixa Foundation has stated that these works “integrate and dialogue with the natural and organic ecosystem created by -the architect- Enric Ruiz-Geli”, in charge of the project, as well as highlighting the need to recover the field of culture.

To recover culture, the content to visit “has to be worth it”, acknowledged Duran, who has not advanced the exhibitions that will be seen next year at the Agora, “since the pandemic has forced all exhibitions to be rescheduled that they had planned ”.

Duran has concluded that culture “has established itself as a basic element for the health and emotional well-being of people, and helps to overcome people’s feelings of loneliness”, while ensuring that the alliances of the Fundación La Caixa with the British Museum or the Louvre will continue to be produced, in addition to having, as he said, more than 1,000 of his own works.

For his part, the regional secretary of Tourism, Francesc Colomer, has assured that “never the title of City of Arts and Sciences has done so much justice as now”, since at the moment the complex is “a vaccination point against to tragedy “while” showing art as an expression that exalts life. ”

“With this CaixaForum, València is in a position to be more beautiful and more cultured,” added Colomer, who stated that the institution is a “blessing” that adds and improves the positioning of the Community’s tourist brand: “It is a brilliant contribution towards excellence.”

The director of CaixaForum València, Álvaro Borrás, has assured for his part that the CaixaForum “are twins” in terms of content, but that each CaixaForum is unique: “What we want here is for this one to be more unique than the others, both because of be the last, as for the uniqueness of the space and the building ”.

Regarding the works, he pointed out that 25% of the remodeling and retrofitting of the building has already been carried out and that “structures are already emerging”, in a building that will have a restaurant, two exhibition halls and an auditorium.