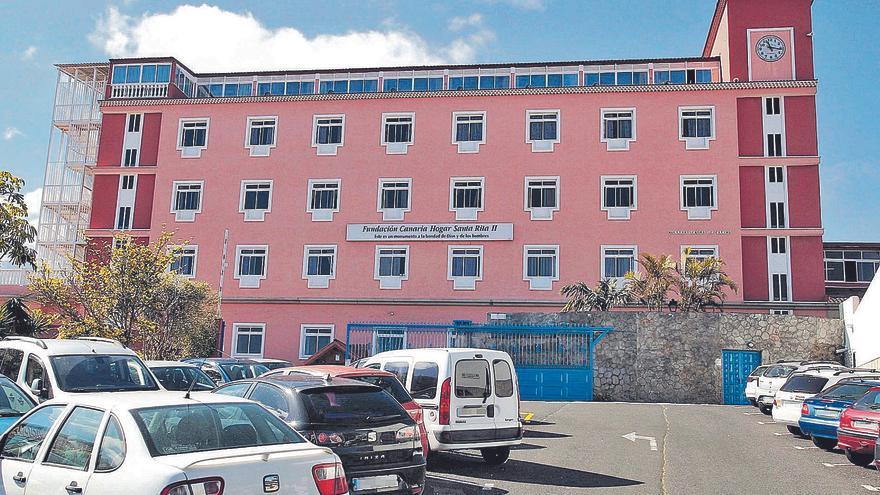 The Hogar Santa Rita II residence -in Puerto de la Cruz, Tenerife- maintained a weak Covid-19 protocol active after finding the first five positives in the residence that occurred in the Fray Leopoldo building. This was reported last Friday by the workers of the macro-residence to the Provincial Labor Inspectorate, through the UGT, given that the center did not maintain the necessary health conditions to guarantee the safety of users and their workers after notifying their first positive at the end of November.

According to the complaint filed by the union, many employees returned to their jobs still waiting for the results of the PCR that had been carried out the previous days with the screening directed and carried out by the Canary Islands Health Service (SCS). Nor was an exhaustive cleaning of the workers’ uniforms being carried out, nor had maximum protection material – such as FFP2 masks – been supplied to personnel who did not go directly to isolation areas, who were only provided a surgical mask to the entrance, something that, on the other hand, is the minimum required in the protocol set by the Ministry of Health.

Part of these situations were corroborated by the president of Hogar Santa Rita II, Roque Silva, who told this newspaper that “if they are well, without symptoms, they should go to work” because “it is not known whether they will test positive or not.” . “It is such a rare issue (the coronavirus), you do not know where you are going to catch it,” alleged Silva, who recalled that “if it tests positive or if they have symptoms, the worker is sent home immediately.”

However, for employees it is precisely this period of time from when a worker undergoes this targeted screening until he tests positive and is isolated that has been able to have an impact on the outbreak, which already has 195 positives. And it is that, in that time, the infected worker has been able to have contact with other colleagues and users of the center. “I worked side by side with a colleague pending the test result for an hour lifting residents and bathing them together; They called her to tell her the positive during the shift, ”says one of the employees who preferred not to reveal her identity. She, like other workers, has been urged to return to their jobs on the premise that there were not enough people to cover shifts, despite having been in recurrent close contact with these positives.

The complaint, to which this newspaper has had access, also reports with “concern” that since October the company that owns the Hogar Santa Rita II has been informed that “crowds in changing rooms” were occurring. The need to provide sufficient protective equipment and that, due to the fact that only nursing clothes were washed in the center, it was not possible to guarantee “traceability” of the hygiene of the uniforms of the rest of the personnel – there are also doctors, technicians and auxiliaries.

It should be remembered that 420 employees work in Santa Rita II and that, although its Covid-19 protocol imposes that they must work in a sectorized manner, without changing from one building to another -the complex is made up of five buildings-, the service needs have been tax. According to the UGT, employees have had to cover the losses of their colleagues in order to carry out their work, which has forced them to move from one building to another without control. But they are not the only ones, until a few days ago, users in better health, “moved a lot within the center,” as the president of Santa Rita II explained.

In fact, in the complaint to the Labor Inspectorate it reflects in this sense that “every day” it has been providing “different information in relation to the management of user care, mainly in terms of their location.” An opacity aggravated by the fact that many of the positives have been diagnosed among workers “who perform tasks in areas other than isolation.” As the union recalls, these workers have only been provided, until last Saturday, surgical masks.

The spokesperson for the Workers’ Commissions, Natalia Aparicio, for her part, affirms that the workers have complied with the protocols imposed in the company to the letter, and recognizes that it is “difficult” to know the origin of the virus that has entered the place where they almost live without shame. 600 elderly people with an average age of 70. “We were ten months without incidents,” recalls the president of Hogar Santa Rita, who points out that to this day they still do not know if the first contagion occurred “by staff or by visits from relatives.”

In this sense, UGT sources argue that there has been little control of visits, given that “between 50 and 60 people could enter in two shifts a day”, which prevented staff from controlling them. “We are 420 workers but not all of us have direct contact with users,” they explain from the union and affirm that “since August we warned that this protocol was not the most suitable.” “They tend to be very vigilant,” alleges Sara, one of the affected relatives who points out that workers are usually very vigilant, but who has seen with her own eyes how both residents and some visitors skip the recommendations of the health authorities. The complaint was filed last Friday, when the positives in coronavirus confirmed by the Ministry did not exceed thirty and workers began to be informed of the results of the second screening carried out ten days later at the site. On Sunday the positives amounted to 79 and on Tuesday, those affected were already 180. With these results, the Canary Islands Health Service decided to intervene in the macro-residence, whose management at this time has been assumed by the Nuestra Señora de la Candelaria University Hospital . Yesterday 15 new cases were reported in the center, of which 14 are workers and one a resident. With these data, the total number of confirmed cases now rises to 195.