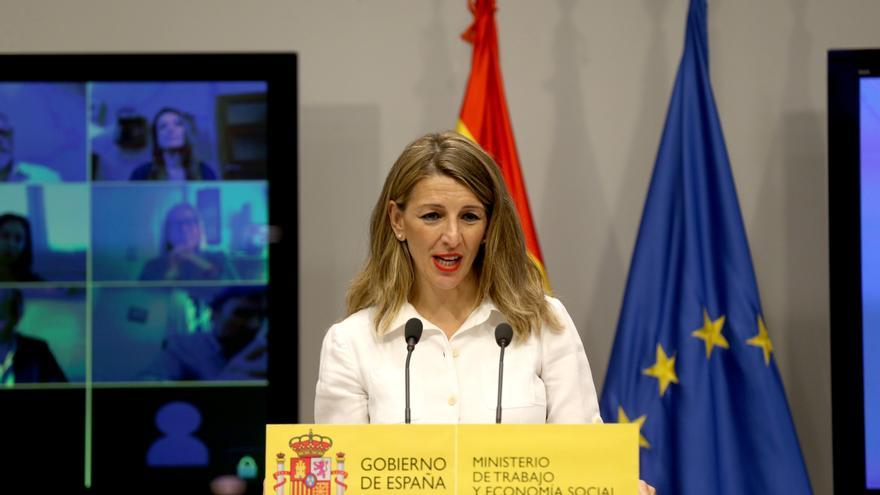 The social dialogue table has resumed talks this Tuesday to close an agreement on the future teleworking law. Unions, businessmen and the Ministry of Labor are discussing negotiations, which according to knowledgeable sources, have got off to a good start. The department headed by Minister Yolanda Díaz has proposed raising the definition of teleworking to 30% of the day outside the center, so that all employees who comply with this percentage of their working hours at home would be under the new legislation. The Ministry’s movement aims to reduce the CEOE’s reluctance to the initial document that proposed considering distance work with 20% of the day outside the center.

In the latest version of the draft of the Distance Work Law, dated August 3, accessed by elDiario.es, it was specified that “it will be understood that distance work is regular when, in a reference period of three months, a minimum of 20% of the working day, or the equivalent proportional percentage depending on the duration of the contract, is provided under this modality ”.

The minimum percentage of the day to declare remote work had become one of the rejection elements of the employer because they argued that people who chose this type of work only one day a week would already be affected by the new legislation , which could entail a series of expenses and obligations for companies. In the opinion of the CEOE, a telework day obeys to policies of labor flexibility and conciliation agreed with the employee.

With the increase to 30% of the day, it is expected to solve this obstacle. The unions had initially opposed allowing an increase in the working day, but were open to negotiating for the regulation to go through.

Sources of social dialogue assure that the conversations to advance in the regulation of this work modality that has been imposed to prevent the expansion of COVID-19 have restarted well this Tuesday, without so much reluctance on the part of the businessmen, so Progress continues, as in the meetings in the first week of August.

Then at the table it was agreed that companies would not have to bear all the costs of teleworking, any reference to “indirect costs” was eliminated and their compensation was left to the agreements. “The latest version of the text is an improvement over the previous one, since it includes approaches transferred from the business sector to the Secretary of State for Employment,” sources from the employer’s association told this media at the time, although they stressed that there were still “elements of improvement “.

With the regulation of telework, the Government tries to equate itself with the rest of the EU countries, where either through labor legislation or through collective agreements, most countries have teleworking regulations. In Spain, status of workers It includes in its article 13 under the heading of “remote work” this type of employment, but it does so with many shortcomings. It is so poorly defined that the Government was forced to include in Decree-Law 8/2020, of March 17, of extraordinary urgent measures to face the economic and social impact of COVID-19, Article Five so that the telework had a “preferential nature” over measures such as temporary cessation or reduction of activity.