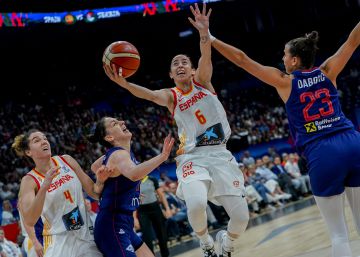 Spain will fight for the gold of the Eurobasket against France after imposing its resistance against Serbia in an ecosystem of extreme hardness. The touching group of players captained by Laia Palau did not defeat only one team, it contained and surrendered to an entire country. Mondelo's team dominated a basketball game first and then won a patriotic battle in which Belgrade was overturned. The Spanish ones survived to all the hostilities. Whatever happens in the final, they will reach their seventh consecutive medal in all the major tournaments as a prize. In the absence of defining the color of the metal, since the bronze of 2001, the Spanish team will rise to the continental podium for the ninth time in the 10 Europeans played this century.

7,194 spectators in the Belgrade Arena.

The stony character surpassed the volcanic environment. In the presentation, the Spanish players jumped to the track of Belgrade Arena smiling and optimistic, dancing in a circle in the center of the track, with Laura Nicholls and her battered ankle enlisted without fail, with the Vals del Obrero of Ska-P and his Resistance! as a motivational soundtrack. Without fear of the scenery of a Comanche territory, something less numerous than what was painted on the eve of the 5,900 spectators of the quarterfinal match between Serbia and Sweden single to 7,200 in the semifinal – but fierce and fanatical in the role of sixth player. Immutable to the environment, Spain could with all, raffled the ambush, left on the road to another host, and signed one of his great deeds of this cycle. Sometimes Marta Xargay and Laura Nicholls (36 minutes on the track both), others Anna Cruz and Silvia Domínguez (crucial against the rival ring), as many Laia Palau, Cristina Ouviña and Laura Gil (squeezing the intangibles), many Astou Ndour (from new top scorer with 17 points), and also María Pina (with a key basket in her 36 seconds of play) … they all took the boat ashore after placating the Serbian tide with basketball and competitive courage.

There were no minutes of trial or concessions. There was no time to lose to mark territory, emotional and basketball. With pride on their backs, the two teams launched from the initial jump to a poignant fight. Pure balance of departure. The mobility of Petrovic could not with the intensity of Nicholls, the canchero spirit of Dabovic did not surpass the claw of Palau … In the guerrilla war there was hardly room for maneuver. He found Xargay with a pair of triples in his first three attempts that put in value the defensive application of Mondelo's set. It was the presentation of credentials from Spain, with the dress of the big days.

They were soon loaded with a pair of personal Palau and Ndour, but the resounding appearance of Silvia Dominguez cleared the problem and served the selection to build their first spurt coinciding with the closing of the first quarter (21-11, 10 m). Eight consecutive points from the base of the Perfumerías Avenida in its first five minutes, reduced the local effervescence and allowed Spain to work with confidence in its party plan in the middle of the noise. That income was what they defended during much of the duel.

He gritted his teeth Serbia not to disappoint the country but, at every horn horn of the premises, Mondelo's team responded by pulling resources. Anna Cruz (nine points in her six minutes on the court in the second quarter) picked up the baton of Silvia Dominguez and turned the Maljkovic team into a match and I can not. Spain was an idea; Serbian, a sum of emotional outbursts (37-30, 20). The boiler of the Belgrade Arena did not finish taking temperature because, between the local parish, the memory began to weigh as much as the illusion.

The environment played against, but the precedents were all favorable for Spain. In his idyll with the podium, Mondelo's team had defeated Serbia in the 2013 European semifinals, in the second phase of the 2015 continental tournament and in the Olympic semifinals of Rio 2016. A sequence that reduced the flight of this Balkan generation but that did not stop them from being European champions in 2015 precisely. In that championship the Spaniards only lost a game, the semifinal against France. A defeat of the few that counts the selection in its excellent recent balance. Spain was presented in the semifinal with a total accounting of 43 victories and only seven punctures (three of them before the unattainable USA) in the big tournaments played in the last seven years. There are already 44. The legend of the six consecutive medals will have continuity. There will be a Spanish party in Belgrade. "We have bundled up the blanket and we are going to try to close the dance floor," announced Mondelo on the eve. Your wish was fulfilled.

To try to avoid it at all costs, Belgrade whole turned to create a claustrophobic atmosphere. In the resumption the ardor and decibels rose on the track and in the stands. It was not the day of the third Dabovic, Petrovic, Jovanovic, overwhelmed by the Spanish defense, but, with the passage of minutes, Serbia turned the race into a national question of first level and dreamed of the final. The duo Danilovic-Tomasevic, president and vice-president of the Serbian Federation, began to send constant messages to the referees within a hand's reach of the track, the fans turned definitively in the cause and Brooks and Stankovic came to the rescue to extend the threshold of suffering of the local set. Rowing and paddling, and sheltered in a play, play that boosted the bravery of the hosts, Serbia regained the initiative on the scoreboard. The income that Spain had defended throughout the night evaporated four minutes from the end after a triple by Butulija (62-64, m.36). But the duel that came after also won the selection, which endured the onslaught with a partial 9-2 to seal the epic. Yes sir, yes sir, we are the revolution, the Spaniards sang after elevating their resistance.