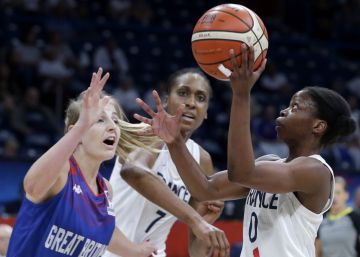 The French team, twice European champion in its history -2001 and 2009-, surrendered to the United Kingdom and will return to fight for continental gold after remaining in the second step of the podium in the last three championships in a row, two of them before Spain. The set of Valerie Garnier extended in Belgrade its competitive excellence after surrendering to the meritorious group of Chema Buceta, the positive surprise of the tournament. Marine Johannès, Sandrine Gruda and Edene Myem knew how to suffer first and impose their stripes later. Although he rowed to the shore, the British took the shock very long.

With Vanderwal and Handy as stilettos, the United Kingdom surprised France with an applied, pragmatic and effective staging (4-13, m.8). The British team took great pains in shorting all the access routes to Sandrine Gruda and it was a good start, but as soon as Valerie Garnier took over, the match began to be balanced. The success of Marine Johannès from the perimeter (14 points at halftime) cut to bites the effervescent breakaway rival with a partial of 13-3 in less than three minutes (17-16, 12 m).

France then grabbed its slight superiority in the rebound to take hold on the track but, as he lowered his hit from 6.75 and grew the British, systole and diastole were again put against. As happened to Spain in the second match of the championship, the French were entangled in the game plan of Buceta, well locked for their interests in defense and sharp in attack. Only in the end were they able to get out of the labyrinth. Green added to the success of Vanderwal and Handy and France assumed that he had to row against the current.

The virtue of the French box before the trip to the changing rooms was to assume with self-denial his role as a persecutor and trust in his talent to compensate for the lack of space and lucidity. Once the lesson was reviewed, on the resumption, the Garnier team showed up with a convincing 6-0 run that, for the first time in the match, allowed them to impose their consolidated medal cache in the last tournaments (gold in 2009 and three consecutive silver medals). in 2013, 2014 and 2015). The hardening of the French defense revealed the British limitations and the command shock gave a swerve.

To the United Kingdom the suit of the semifinal began to come great to him while France added resources with the episodic protagonism of Edene Myem, 10 points in the third quarter. The Gallic income in that stretch did not surpass the 8 advantage (47-38), but the body language of the contenders reflected a clear transfer of confidence in favor of France. However, that confidence became for a moment in sufficiency and the fear to win of the United Kingdom became a nothing to lose that untied again its bravery. Always with Handy and Vanderwal in front, Buceta's team felt the re-engagement. With 54-51 on the scoreboard, two clear shots under the basket failed and with 58-53 Vanderwal crashed the rim triple that put the United Kingdom two. They lost their chance and France did not forgive to catch their fourth consecutive final.